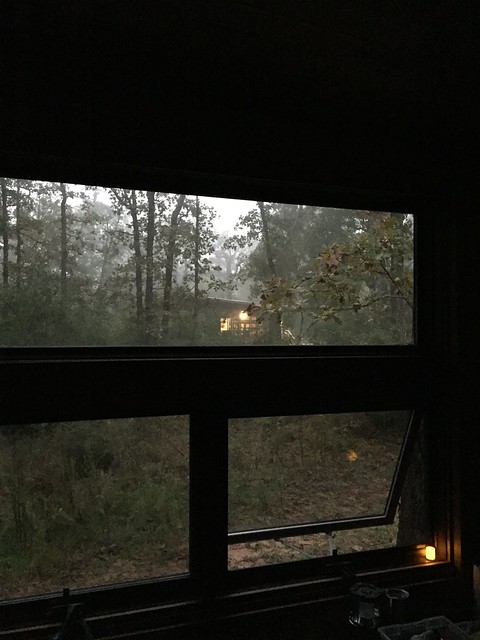 We’ve been friends for 21 years now. As we sat around the picnic tables at Fort Boggy State Park, we reminisced about the past and how we met up on the T/S Texas Clipper II during the summer of 1998, trying to piece together the other friendships and acquaintances that led us all together. While our friend group is a bit broader than the three of us, over the last several years only three of us have gotten together to spend a weekend together. First we included all of the kids, five between us, and then we moved to an adults only weekend since at least two of us aren’t regularly away from it all.

Except for the bathroom situation, this year proved to be perfect—perfect weather, perfect cabin, perfect schedule (nothing). I managed to find a cabin at Fort Boggy State Park that looked enticing and it proved to be beyond all expectations. The bathroom situation was fine for me because of my already rustic nature but I was with two city slickers, however we all made do generally. Considering that we’re either 40 or nearing 40, health implications are ramping up–not just the thoughts about growing older but actual medical issues that I think we’re all trying to wrap our heads around. It’s easy for me to think that I’m still 30 and as spry as I was before having Forest but that is definitely not the case. And it isn’t just that, but knowing that I’m capable of more things than one of my friends because of her illness had it hitting home to not take for granted what I’m able to do at 39 and to keep the movement going, to stay active, to keep focusing on overall health and longevity. I’m sounding like I’m 60, but middle age is smacking me in the face soon. I’m also being deliberately vague here but I shed a lot of tears 10-11 years ago when we found out about my friend’s diagnosis and here we are, time passing us by and the effects a decade later also smacking us in the face. I can’t help but think in 5, 10, 15 years how we’ll be adjusting these weekends, because I know we plan on keeping them up (and maybe turning them into a week to some far-off place eventually) and we’ll be figuring out what we’re able to do together as a group. 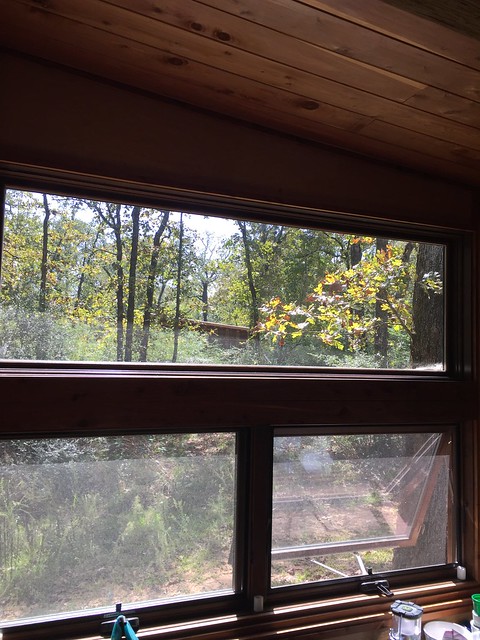 So, there was lounging around in pajamas, taking luxurious noon-day naps, slow meal times, and plenty of porch sitting. With no agenda, our only outing was to the Dollar General to pick up a few food items we forgot and of course we got distracted by the random junk we could buy ourselves and our kids. There was time spent down by the lake playing Uno and learning to play Skip-Bo, and now I want to bring cards games back into my life after a 20 year hiatus. I grew up playing Uno with my family and played cards in classes in high school after we’d done our work, and now I can’t wait for Forest to learn card games. I may have to find Go Fish to get him started. As I was driving home after the weekend my urge was to just sit and play cards, to have that chatter and game time to soak in the autumn sun and enjoy the afternoon. 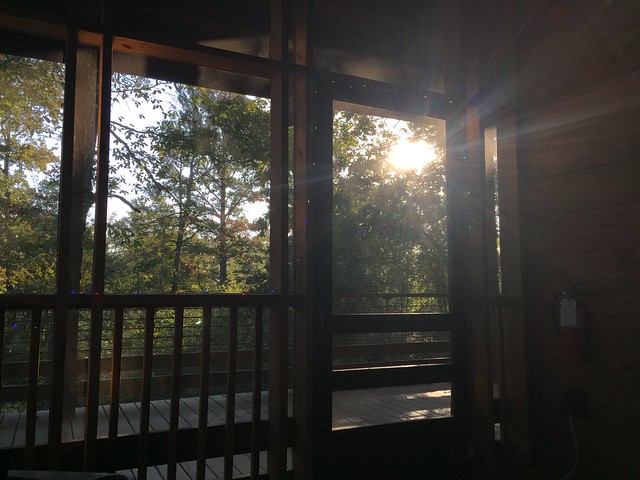 Saturday evening we managed to pull our assets together to build a fire. I’ve watched Chris build plenty so it wasn’t like I came into this knowing nothing but as I said, Chris makes the fires. One of my friends stepped in because she’d had some lessons from another friend of hers and together we managed to get the fire going long enough to roast ‘mallows and make s’mores. S’mores are the type of dessert that it doesn’t take long for the sugar overload to set in and after a few were made we opted to linger on the porch while the fire simmered. Eventually we were responsible campers and doused the fire out, though I could have gone for the simmering smells of a campfire all night long.

On Sunday we attempted to drag out the remaining hours together as long as possible, eating a slow breakfast and sipping coffee on the porch again. Time crept up on us and because we had a short walk to haul everything back to the cars and check-out we got our acts together late morning to clean up and leave the cabin. I realized that morning that we’d had a late breakfast and just because we had to leave the cabin at noon didn’t mean we had to leave the state park and so our card gaming continued at the picnic tables near the pond where we sat in dappled sunshine for a couple more hours. Eventually we trekked into the tiny town of Centerville, most famously known for Woody’s Smokehouse, an I-45 rest stop destination. Probably a bit eye-rollingly to them, twenty minutes south down the road from there is Madisonville and Buc-ee’s has opened a new store, and I suspect there are plenty of customers who have been swayed to change their mid-way Dallas to Houston rest stop. While Woody’s Smokehouse has great barbeque we opted for local Italian restaurant that had just wrapped up the post-church rush at two in the afternoon.

Bellies full, we said goodbye and departed ways, two of us trekking south via farm-to-market roads and one heading north via I-45. I know it gets said every time, “We should do this more often!” and I know we will try our best but life is full. I live about an hour away from one of my friends and we could easily get together for a few hours every couple of months with the kids. I do think we’ll try our best to make time for a second get together with the kids in the spring and then a solo weekend in the autumn, though. I wish there was an easy answer for how to make these things come together more easily and if you’ve got one, do let me know! It probably involves living in the same town, though!

I’m trying to find an eloquent way to wrap up this little essay but all I can come up with are the bundle of soft emotions I feel from a wonderful weekend with friends, thoughts that don’t exactly leap out easily in any firm linguistic context. Suffice to say, I love and miss my friends and we had a lovely, quiet weekend together!