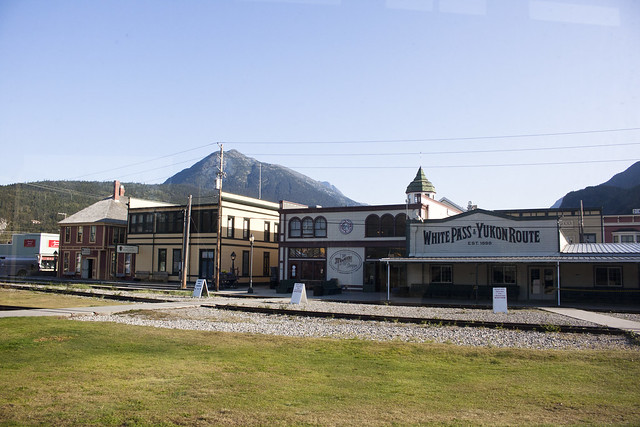 We arrived in Skagway, AK and had approximately 12 hours to do what we wanted. Our first thing on the agenda was to take the White Pass and Yukon Route Railway up to the Canadian border, cross it, and then turn around and come back down to Skagway. I’ve gotta say, all that made me want to do is take that train all the way to its final destination somewhere in the Yukon. You’ll see… 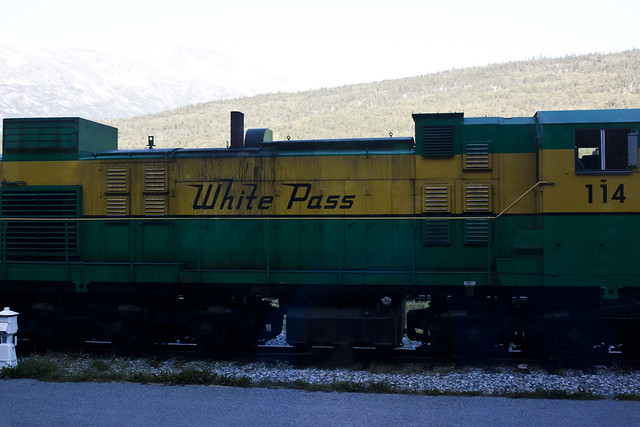 We slowly choo-chooed through the eastern side of town, passing storage areas and seeing the back side of houses along the way. 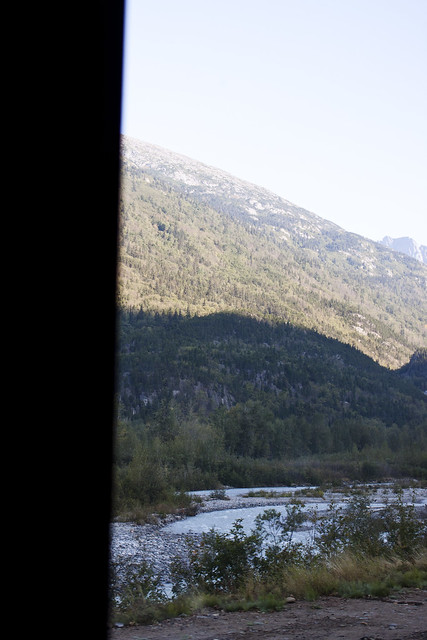 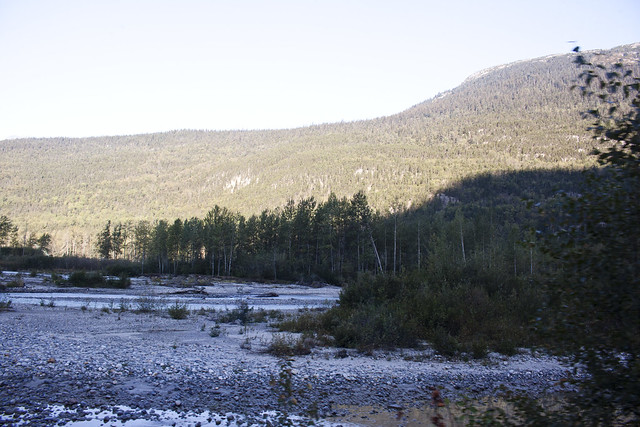 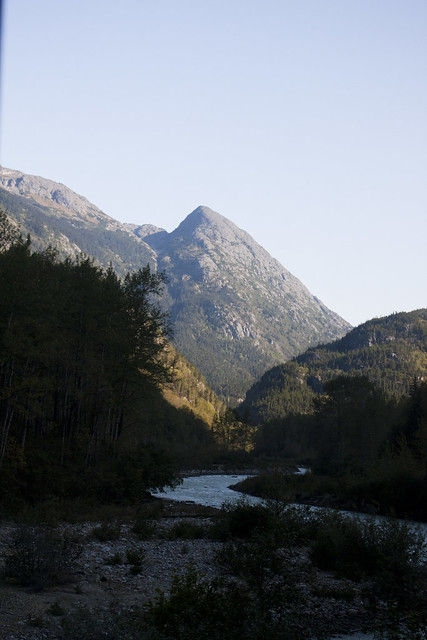 The Skagway River was gorgeous at the lower elevations. 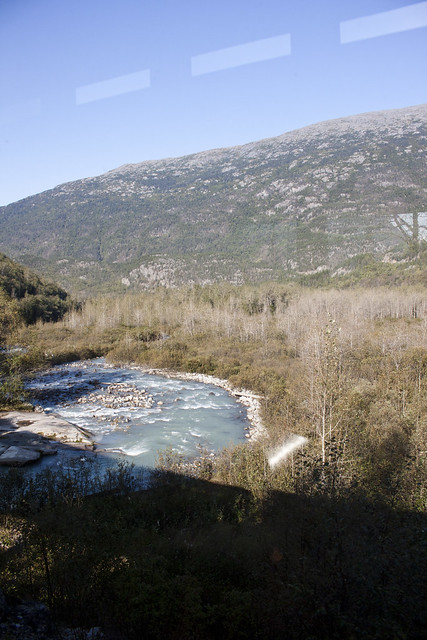 And then we slowly started ascending the sides of the mountains and got an aerial view of where we’d come from. 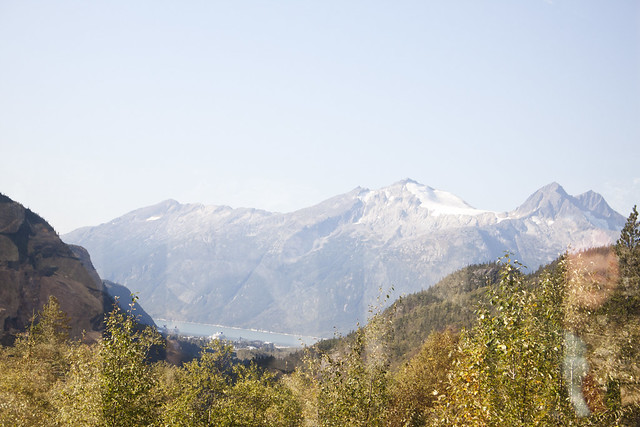 Looking back down to Skagway and the Taiya Inlet. 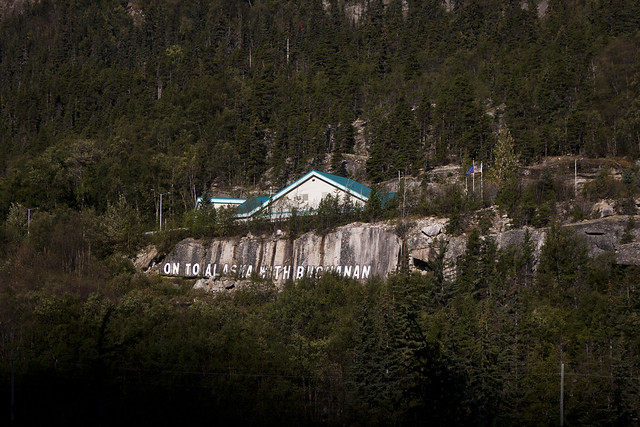 In this area the Klondike Highway parallels the railroad and river. This is the Skagway/Fraser US Customs Border crossing, though the actual border is nearly 8 miles north of here. During the train ride we also had a guide coming over the speaker to tell us about the local history and one of those interesting tidbits was about what is painted on the cliff face here, On to Alaska with Buchanan. Turns out, back in the 1920s a business man from Detroit would bring youth to Alaska to get out and see a bit of the country. You can read a bit more here. 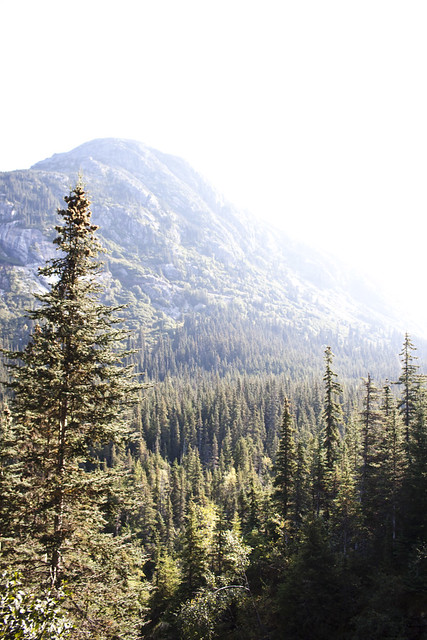 Eventually the train detoured from its journey next to the Klondike Highway and turned east towards Warm Pass Valley where we were able to stay on contour with the mountains instead of traveling over a bridge across the valley floor. 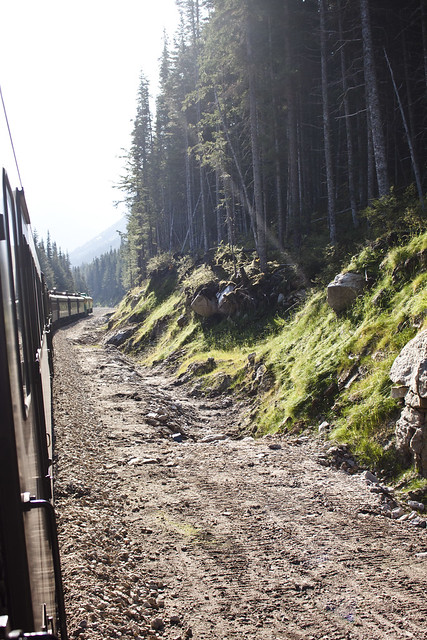 It was here that I finally got out onto the back of the train car to take photos outside and got wonderful whiffs of alpine air. That fir tree smell was intoxicating and I wanted to bottle it up and take it home with me. 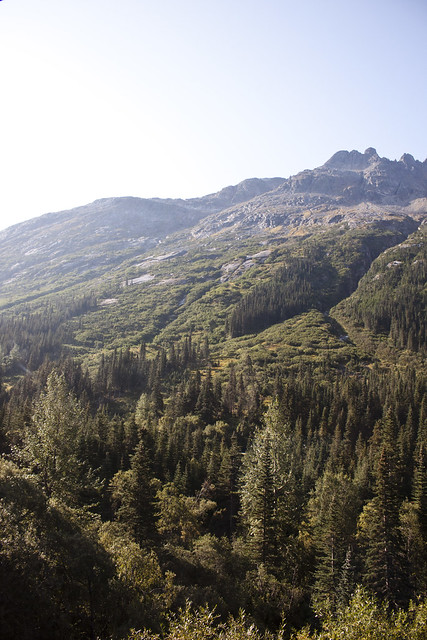 My topos tell me Laughton Glacier is just beyond this mountain here. I must say I was definitely interested in wanting to explore this part of the Tongass National Forest, which is something you can actually do via train. There are a couple of trails, including the Chilkoot Trail that you can be dropped off and picked up at—we saw the Laughton Glacier trailhead at the apex of where we turned at Warm Pass Valley. 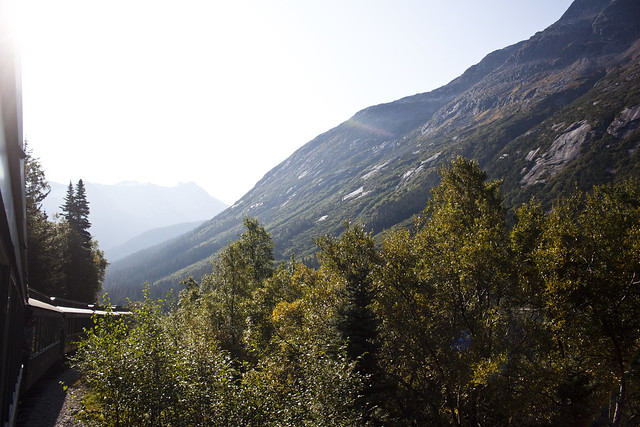 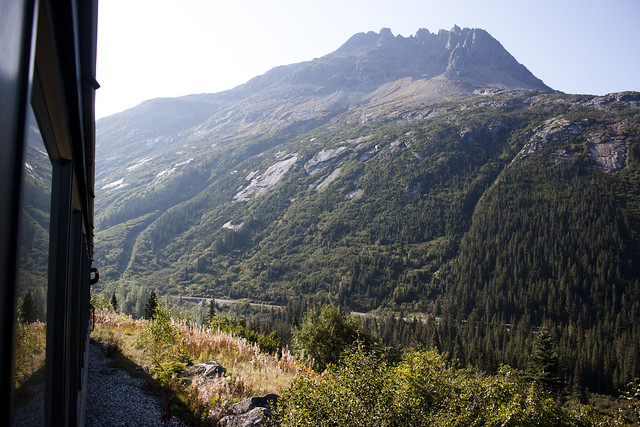 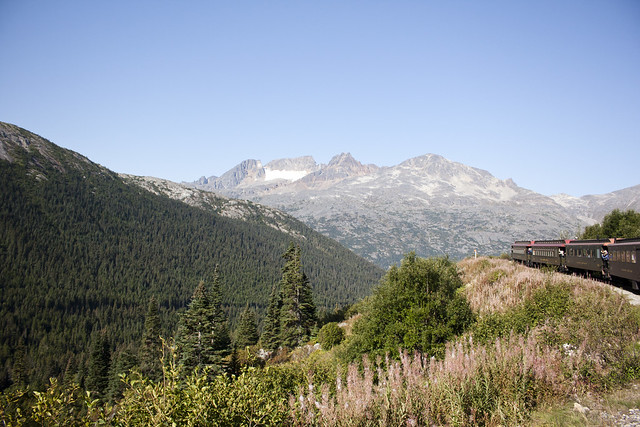 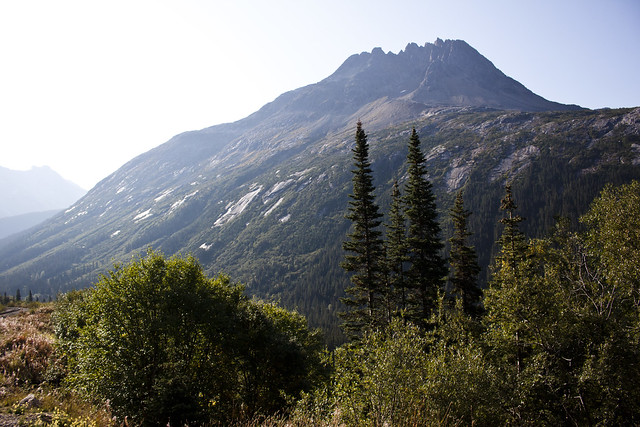 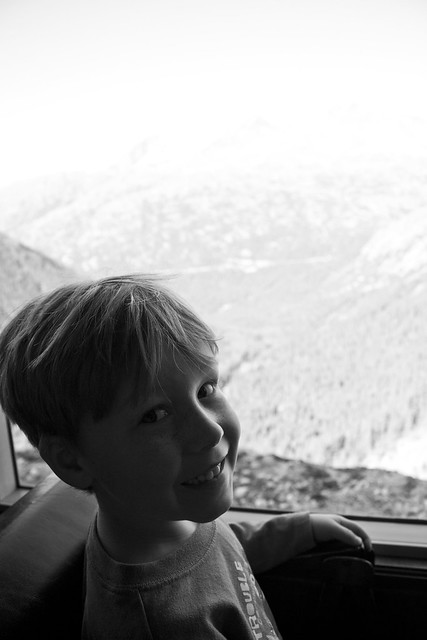 Forest was really enjoying the train ride. I was a bit nervous about him having the attention span to enjoy it as well as him having motion sickness, something he’s developed a bit over this last year. But he did magnificently well! 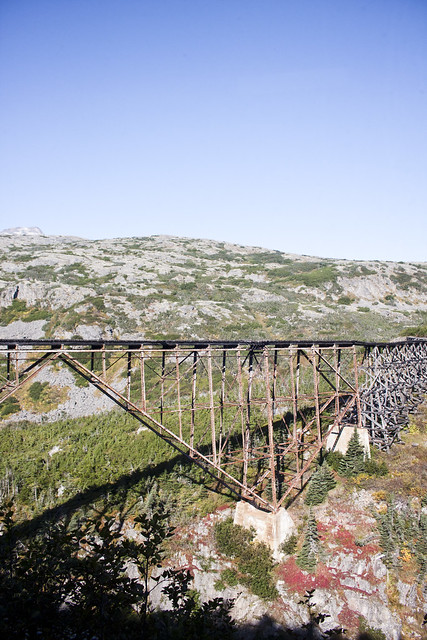 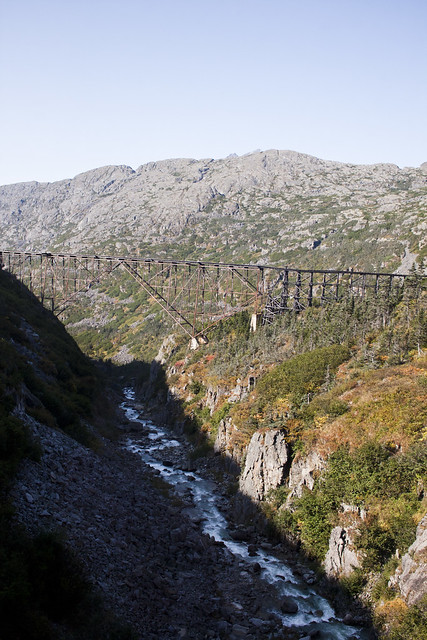 Next we passed an old steel cantilever bridge that has been out of commission since the 1960s. I can’t imagine trying to build this thing 100 years ago—and honestly, think about all of the major early engineering feats from dams to the Panama Canal, what labor must have gone into those. A bit more information about the old bridge here and here. Additional photos from the Library of Congress here. Now the rail goes upstream a bit and crosses a smaller bridge and then goes through a short tunnel in the mountain instead. 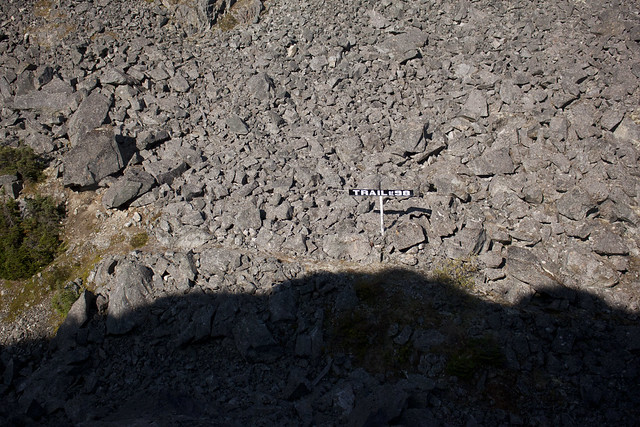 Once we emerged from the tunnel we got glimpses of the old Trail of ’98, which is the old gold rush trail of 1898 in the greater Skagway area. I believe the tour guide said thousands of people were traversing this trail daily, passing each other with mules loaded down with months of food for the backcountry. And what is amazing is just how well worn that trail still is! 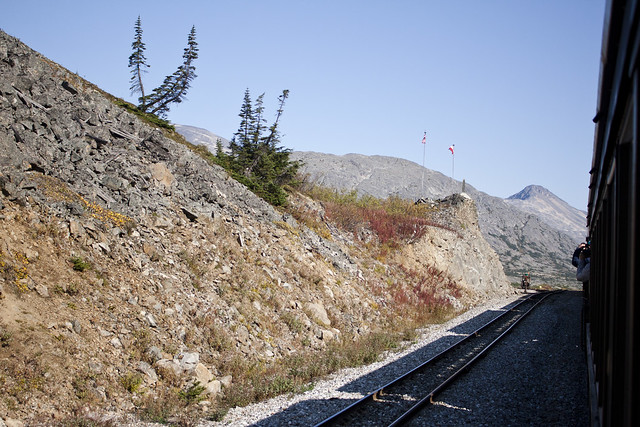 Soon, we were nearing the border crossing! Considering I’d felt poorly when we’d crossed a few days prior at the Washington/British Columbia border and hadn’t relished it as much as I’d wanted, this was a bonus do-over! Plus, by train in a remote location! How cool! 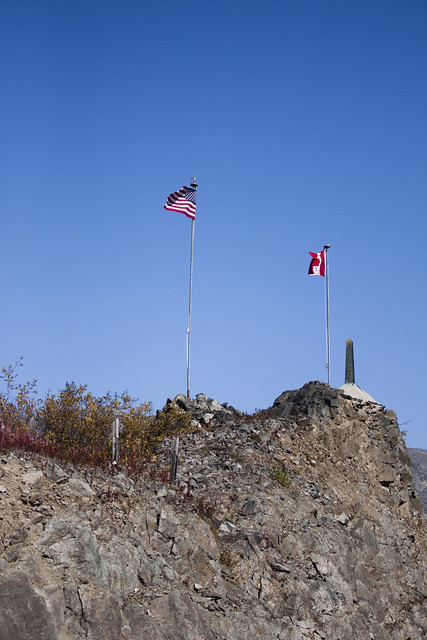 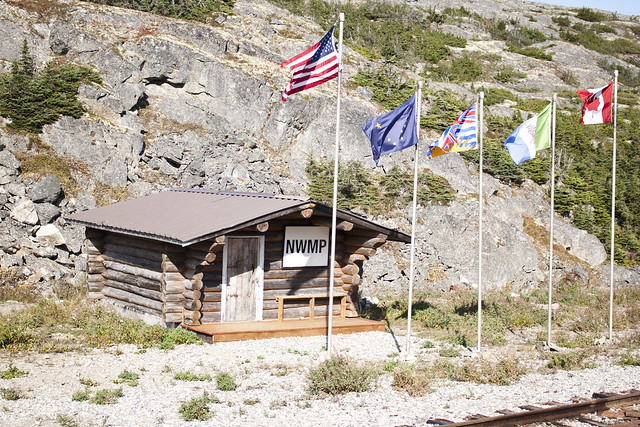 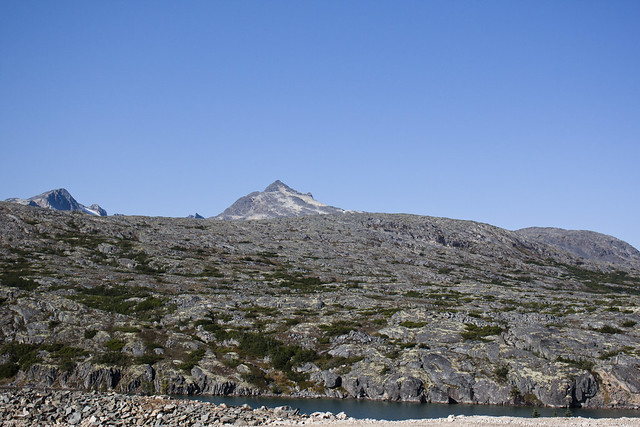 We weren’t in Canada long but it was interesting to see the terrain change somewhat drastically right there at the border. 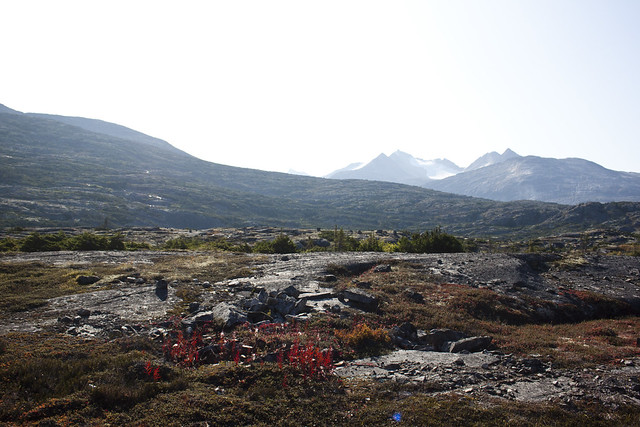 I would have loved to have gotten out and poked around this area for a few hours. What interesting plants we could have found! 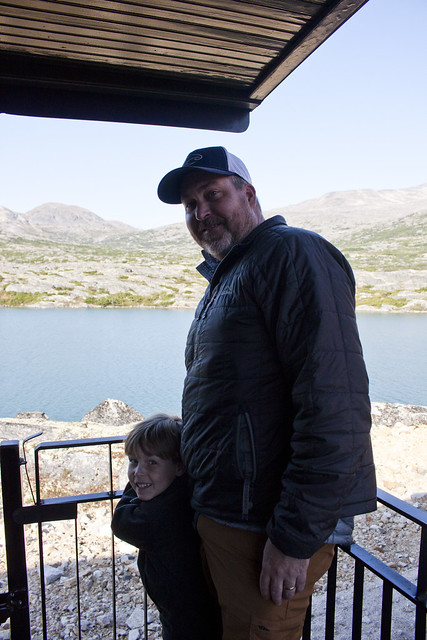 I would definitely recommend doing this trip if you find yourself in Skagway. It’s a little touristy but if you don’t have a ton of time to spend in the area but want to see something other than the very touristy parts of town, do take this trip. I would definitely be up for the other routes the train provides and spending a few days in Canada and then making a return trip back. The scenery was spectacular and of course we lucked out with great weather!

Ah, these posts are making me want to go back to Alaska again!