People are idiots. It starts at the leadership, for one. Let’s open everything up! No, you don’t need a mask! Who needs masks? We won’t force our citizens to care for their fellow citizens. Nope, no way!

Increasing COVID-19 cases across many states, including Texas. Recording breaking numbers this month, multiple days in a row. Spikes here, spikes there, everywhere a spike! Spike for you, and you, and you!

I went to the grocery store again this month for our big trip and it was nearly the opposite of how it was three weeks prior. Three weeks prior 70% were wearing masks. This time, 70% weren’t. I just…cue head explosion.

I may have said I was cranky but that’s really anger. I’m beyond angry because hell, I want to run around without a mask like it is February 2020! I’d like to not think twice about walking into a store, running errands, doing a Target run with a Starbucks in hand. Nothing sounds better than sitting at a restaurant so we don’t have to cook and do dishes. Relaxing on the patio of our local Tex-Mex restaurant while Forest plays in the grassy, fenced off area with other kids—sounds delightful! Popping up to visit my parents or having them come down here? Fun!! Seeing friends?? More fun! Heading to the beach and having a leisurely weekend at a hotel? Planning a vacation? WOULD LOVE TO!

I’m not doing any of those things because THERE’S A PANDEMIC GOING ON. Forest is supposed to go to Kindergarten this fall. Every person I talk to with kids in school can’t tell me what their districts are doing BECAUSE NO ONE KNOWS! Are we going to do faux homeschool for Kindergarten? Is Forest going to miss out on that first year of socialization at a new school? Or are we going to send all our kids to school for a month to see another spike in this first wave (it’s not a second wave, y’all…we never finished the first one) and have to close schools again?

Anger and Despair. That’s where I’m at these days. With little bits of joy tucked in here and there because my kid is really cool! 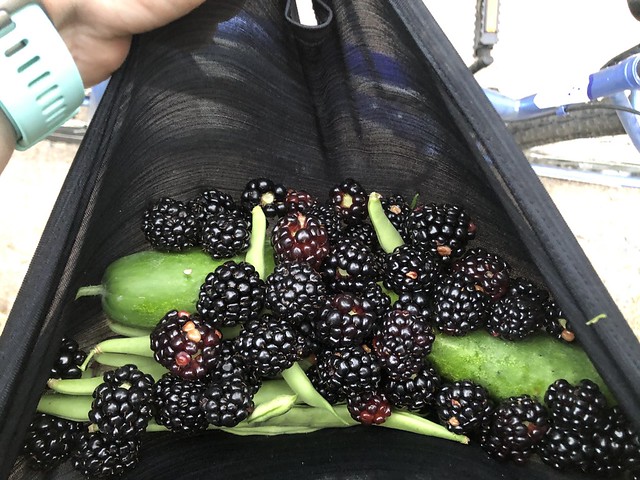 I hate deer and I hate birds.

The deer for their usual crap in the garden, plus deciding to expand their palate to salvia this year. Like, every other year salvia is disgusting, but this year? Sounds tasty to them!

The birds because they’ve decided that pecking my tomatoes jussssstttt as they turn ripe is the bees knees.

That said, the garden is doing pretty good at the moment. I’m having to hand water the edible garden about every other day right now because we’re in a dry spell at the moment.

I will do a garden post soon to share more. I effed up in the garden this evening—we have several thriving pumpkin vines and were finally getting a couple of small pumpkins forming. I noticed one of them probably needed to start having some support so until I could get something to sling it up in I was going to adjust the pumpkin to rest on the trellis. Except I cracked the stem. I thought it was salvageable for about ten seconds and then realized I’d screwed up and just broke it off the rest of the way. Dumb, dumb, dumb. 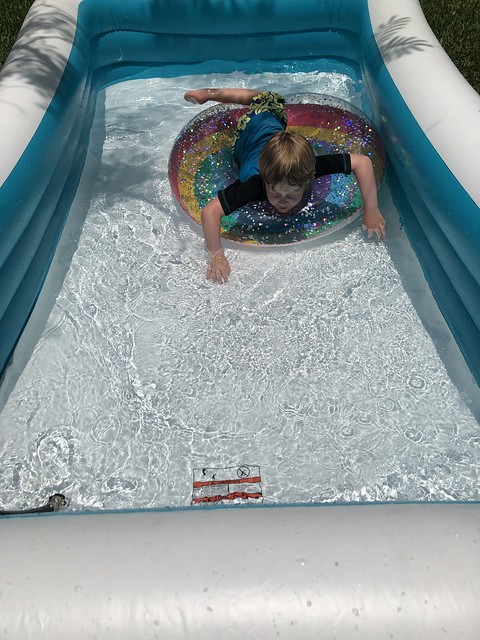 +days in the inflatable pool
+summer! I LOVE SUMMER!
+blackberry season
+our flats of milkweed on the potting bench
+that at least three turtles from the pond came up to nest in the yard! Keeping an eye on the nests for when they hatch!
+bike riding! I’ve been bike riding nearly every day since late April. 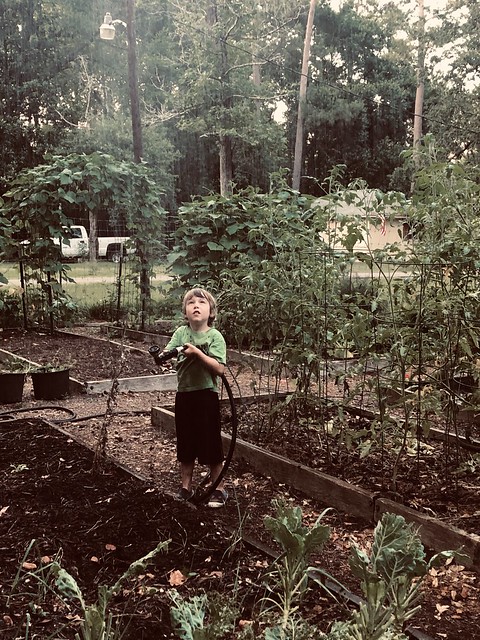 Reading:
I keep telling myself, “This week I’m going to put the phone down and read in my downtime!” That hasn’t been happening too much lately. I am trying to catch up on a backlog of magazines, though. And am reading scattered books here and there.

Making:
Art! I’ve gotten into pour painting and have made a few small pieces. It is very fun and messy! I’m also working on a few other pieces as well.
Here’s some of what I’ve done recently: 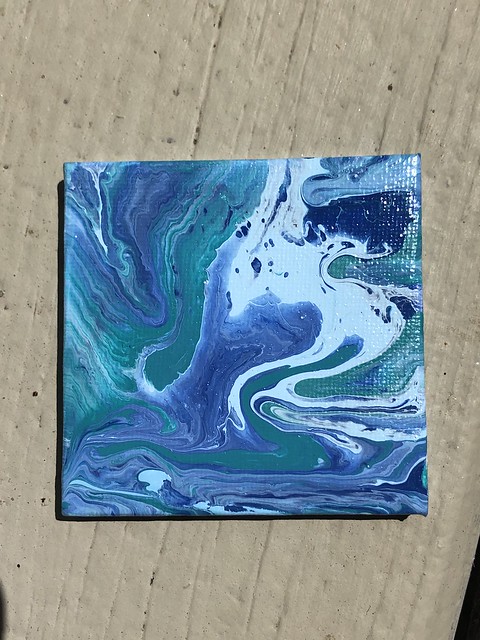 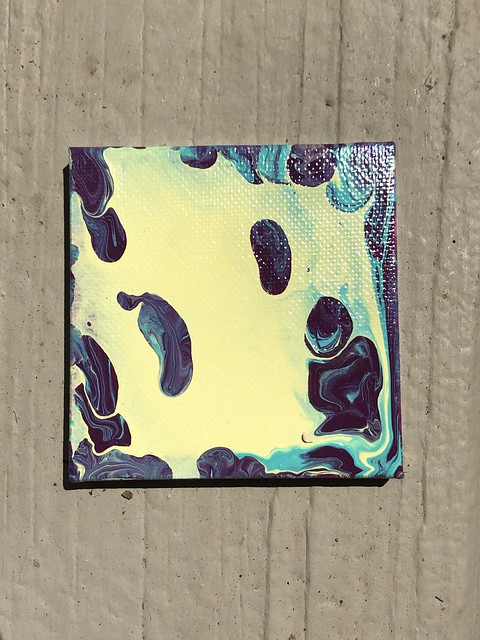 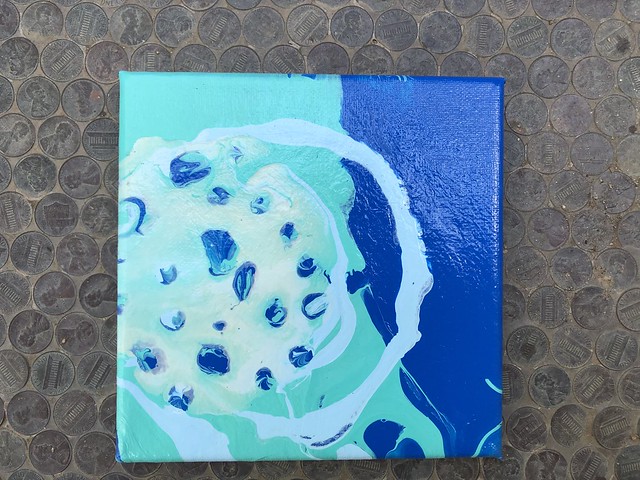 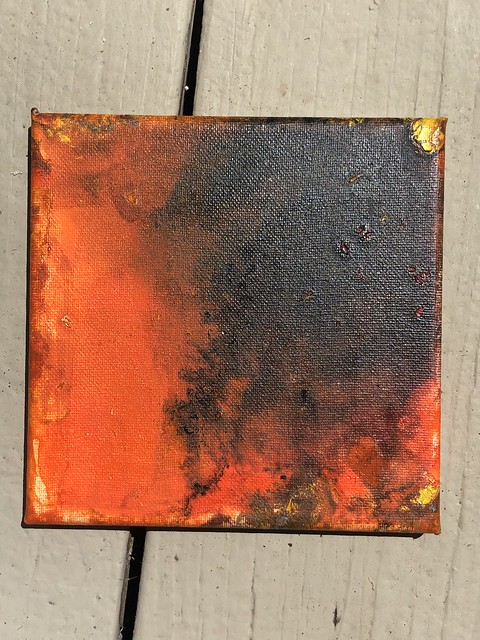 This one is Forest’s with tempera paint.

Watching & Listening:
I go through spells where I don’t watch much but I’ve been watching a few things recently.
+Sweet Magnolias and Virgin River on Netflix—two light and fluffy series.
+Tara Road – a movie from 2005 that feels like it was 1995 but makes you nostalgic for the Before Times.
+The Hustle – So, funny story. Our tv upstairs is a smart tv and had been doing mysterious things back in May, like randomly turning on at odd times of the day and changing to different languages while watching tv. Chris unplugged it and reset it and it seemed better but then I watched this movie. I didn’t realize until later when I tried to watch another movie that something had been wrong. So, apparently I watched this movie with audio closed captioning on! An external narrator came on and would talk through the entire movie that didn’t have dialogue, including the introduction. It actually kinda went with the movie because it was a bit slapstick and a comedy and I only realized something was wrong when I went to watch another movie and it did the same thing! So, funky tv doing funky things!