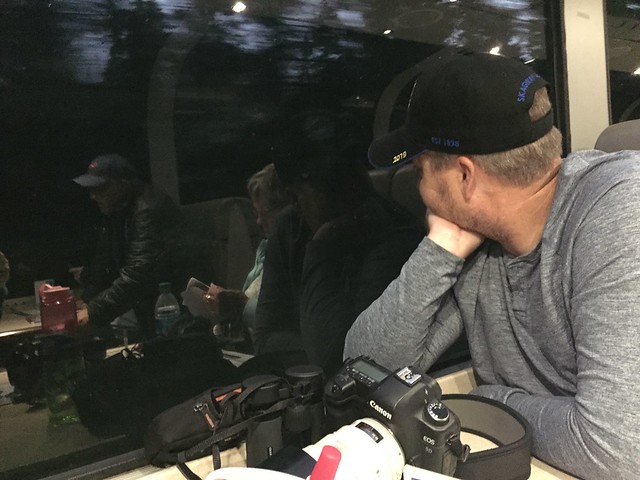 There were multiple ways we could disembark the cruise ship when we reached Seward, Alaska. We could disembark on our own and figure out our own way to Anchorage or wherever we wanted to go, we could take a bus to the airport or to another drop off destination in downtown Anchorage, or we could ride the Alaska Rail into Anchorage to the airport. Chris did the research and said that the latter sounded like a really cool trip and that it would be worth doing, despite about a four hour ride on the train to Anchorage. Plus, it meant disembarking first!

We woke very early so that we could finalize packing—we’d left our main bags out in the hall overnight to be loaded and bused back to Anchorage—and had a very early breakfast down at the buffet. Then we made our way to the theater on the ship to wait until we were allowed to disembark the ship and get onto the train. As you see the photo above, it was dark when all of this was happening and daybreak was only barely beginning to happen when the train pulled away from Seward. 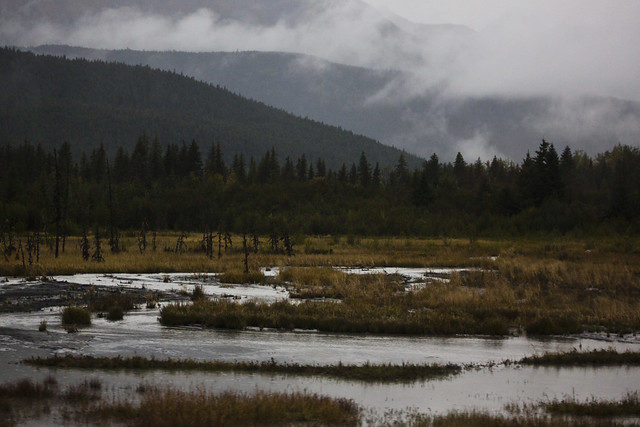 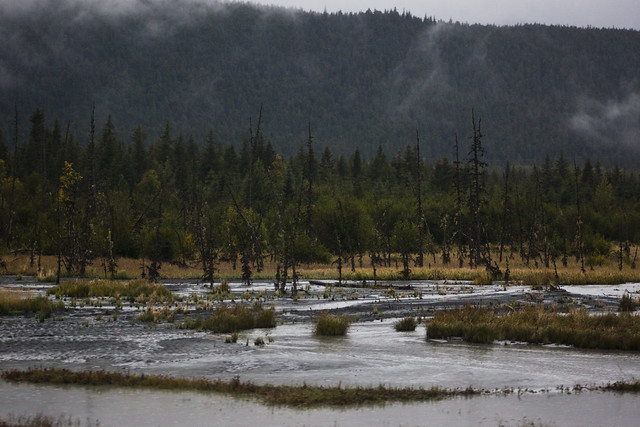 We shared our table with an older woman whom I cannot recall many details about now, 10 months later. She was friendly and mostly read her book while taking moments to look out the window and take photos. We got underway and each car had their own waiter who would serve drinks and some meals as well as talk about the history and surroundings as we went along. He was an older gentleman who had retired and would come up and work the route during the summers! Sounded like a pretty enjoyable summer job to me! 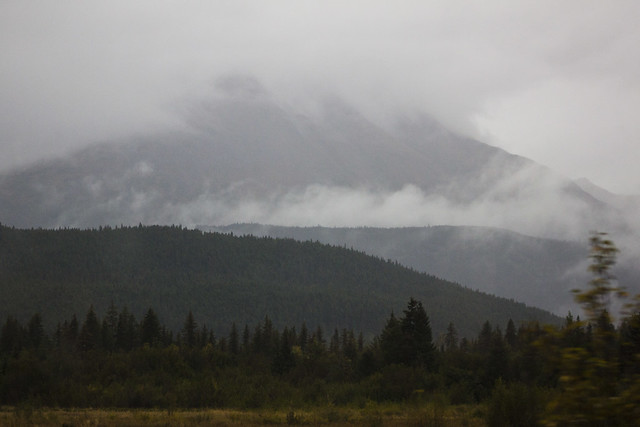 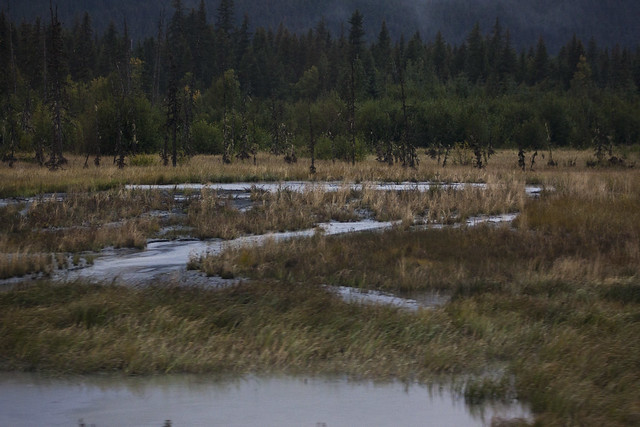 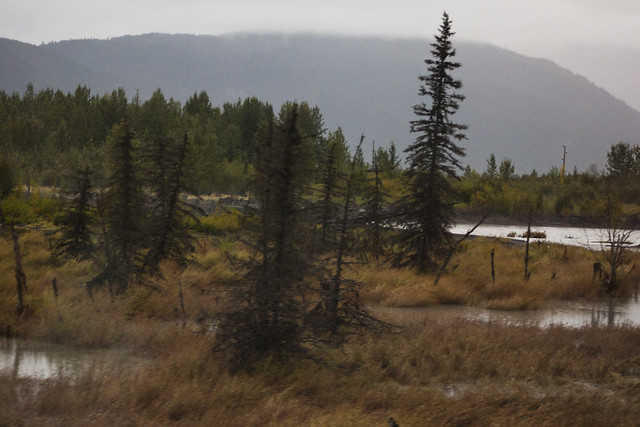 As we got going and the light began to break we saw a very autumn-like atmosphere outside. It was cloudy with fog and a bit of rain in the area. Felt very much like November and not early September—well, a lower 48 November, not an Alaskan November! 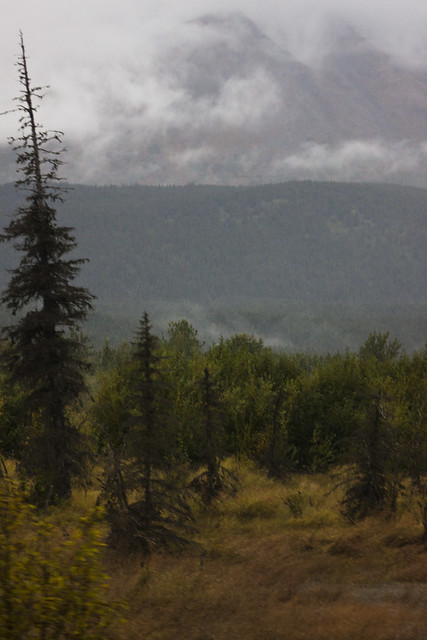 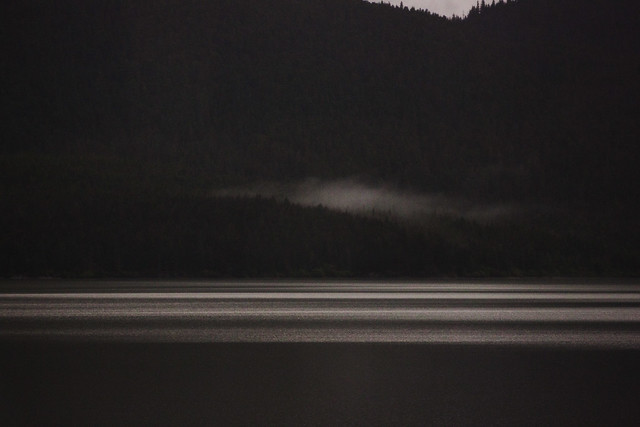 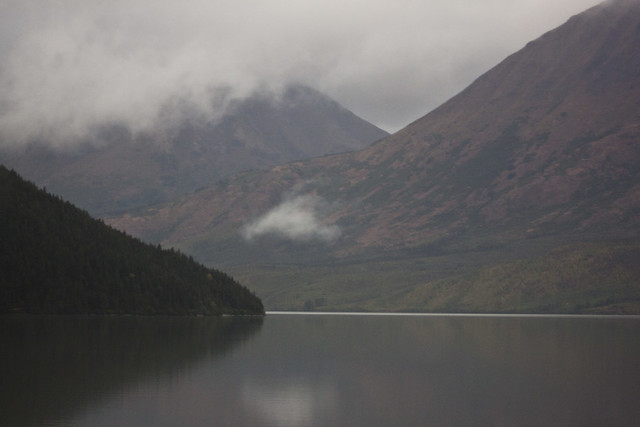 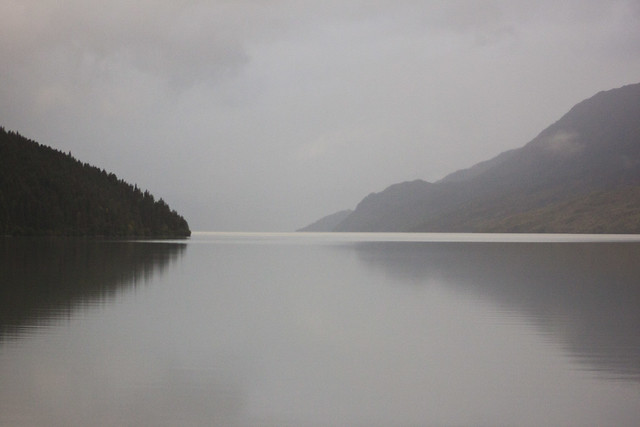 Eventually I was able to order coffee in a special coffee mug that you could refill for free throughout the course of the trip with any beverage. I got my fill of coffee and Chris had a Coke later on once we ordered our salmon chowder! And surprisingly this was probably my second favorite salmon chowder of the entire trip! I have a photo down at the bottom. It was so good! 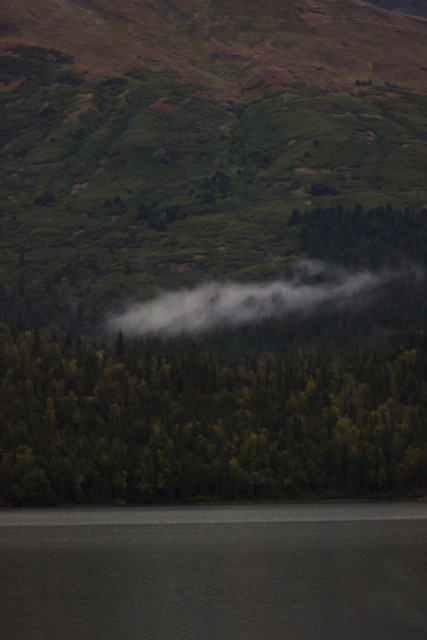 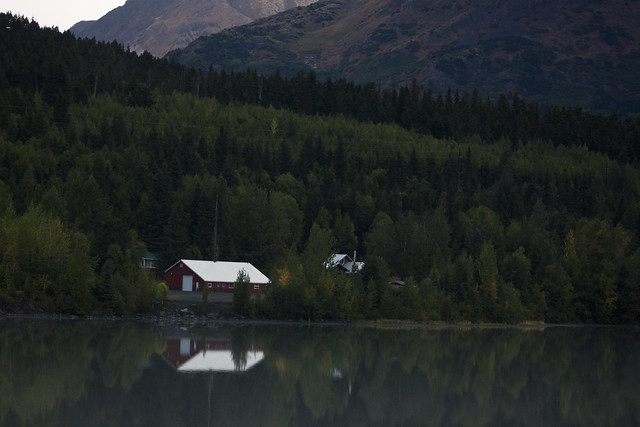 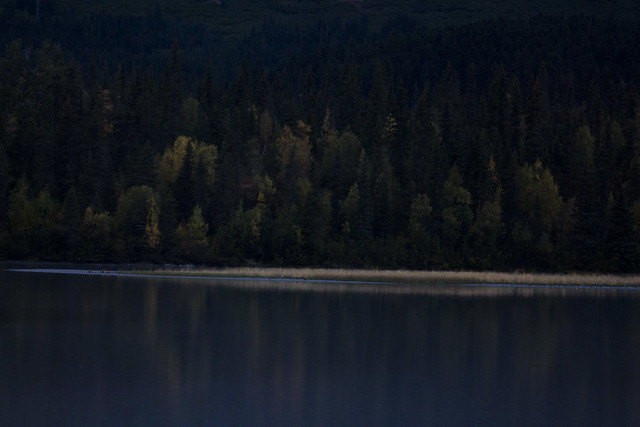 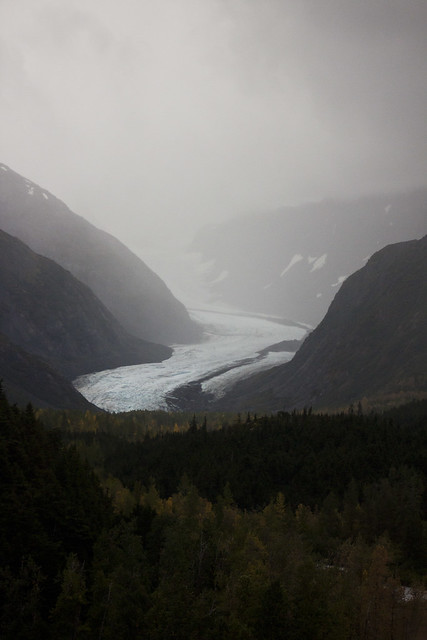 Along the way there were more glimpses of glaciers as we entered a roadless area after Moose Pass. We’d paralleled the road for the beginning of the trip and then detoured off for about an hour and a half or so. 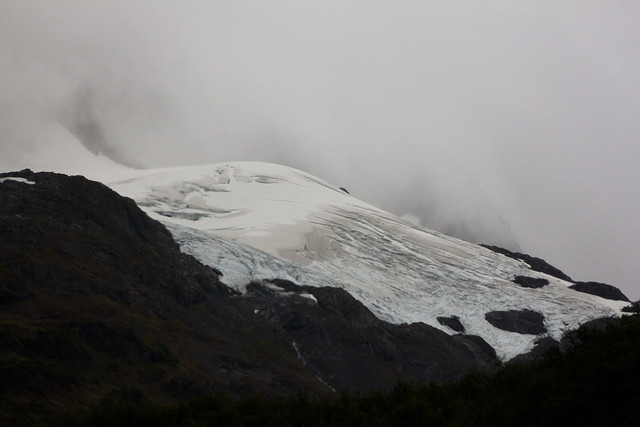 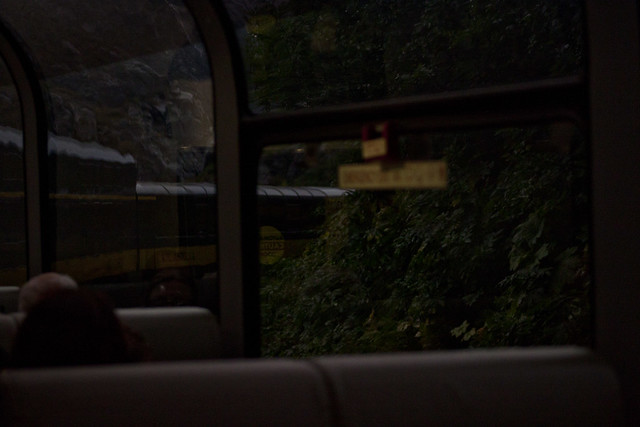 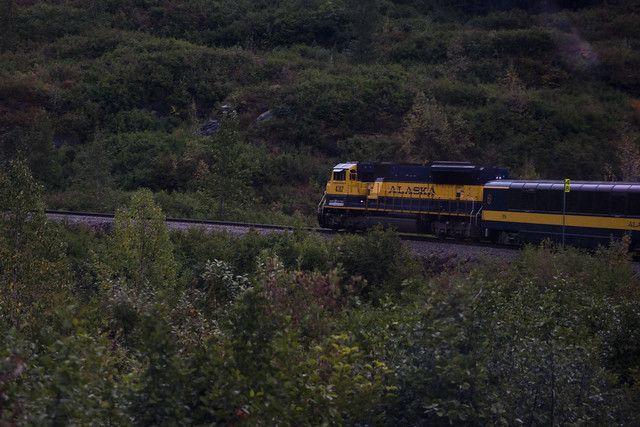 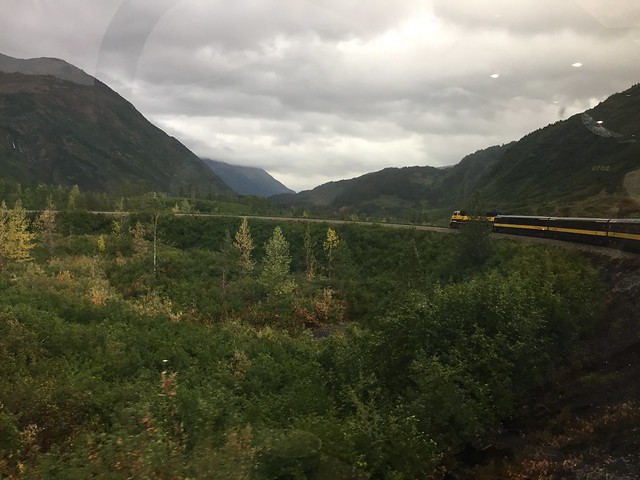 Unlike the smaller train we took in Skagway, this train didn’t allow for any popping outside to take in the scenes and scents of the area. 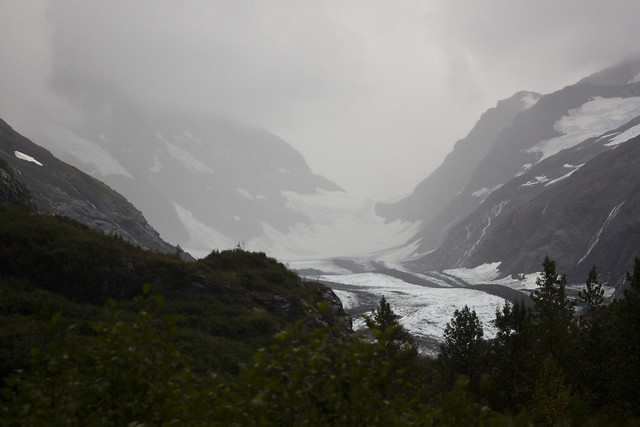 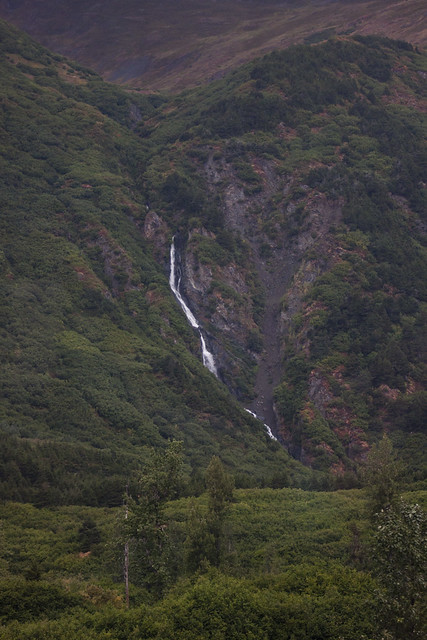 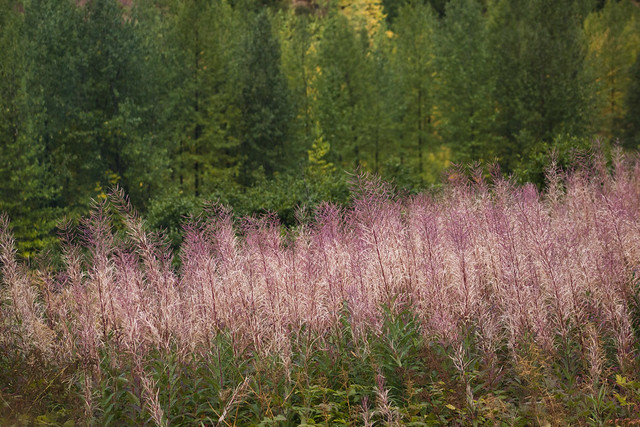 Fireweed past its peak. Sometime around this point we actually slowed down and pulled off onto an adjacent rail to allow an oncoming train to pass before we backed up and continued on our way. 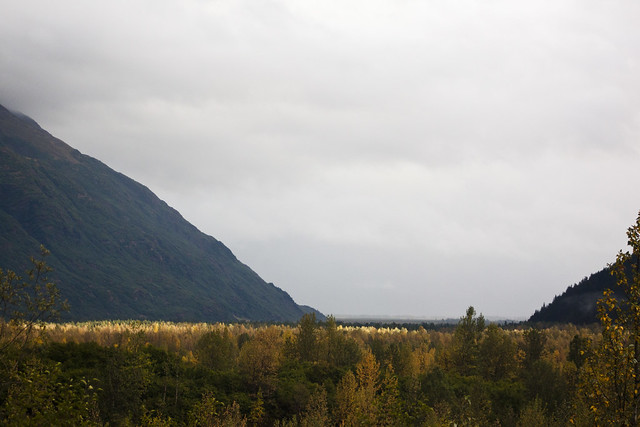 We slowly descended towards the valley, the terrain changing quite a bit, leaving the mountains to the background. 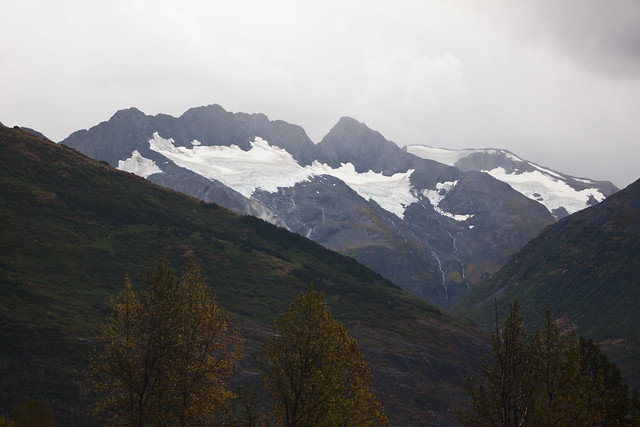 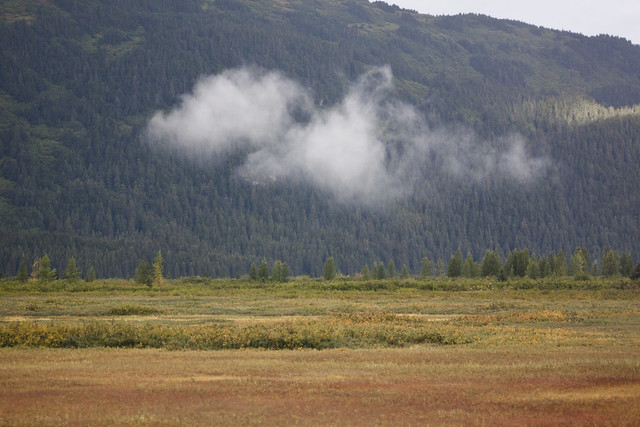 Glimpses of the Chugach Mountains… 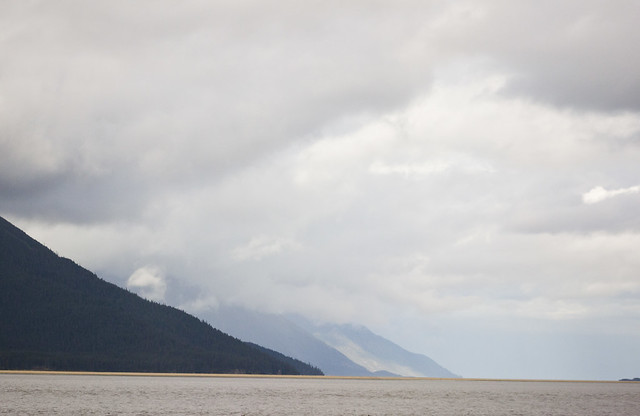 And then we were at the Turnagain Arm, where we saw the beluga whales, which are still probably one of the highlights of this trip for me! Never would I have imagined ever getting to see a beluga whale! I’m still bummed our later efforts to find them again failed. 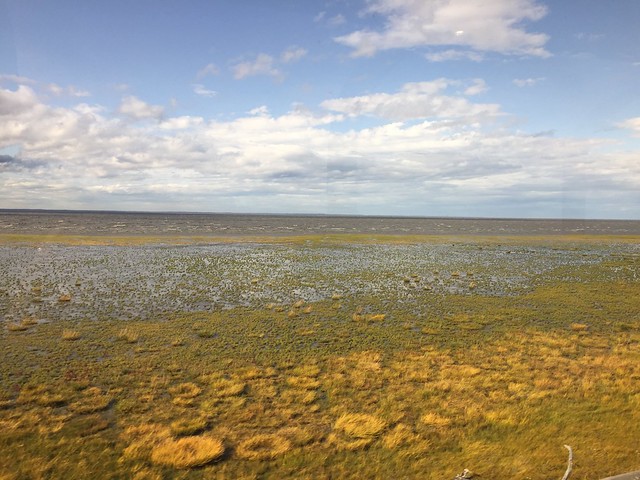 And then the terrain flattened out even more as we went past marshes and then soon we were in Anchorage itself, passing roads, cars, subdivisions. I must say it was quite jarring to arrive into Anchorage and feel as it I was in the middle of a Houston suburb. Sure, it had its own flair but after being in actual small-town Alaska for the last week, seeing Anchorage was eye opening! 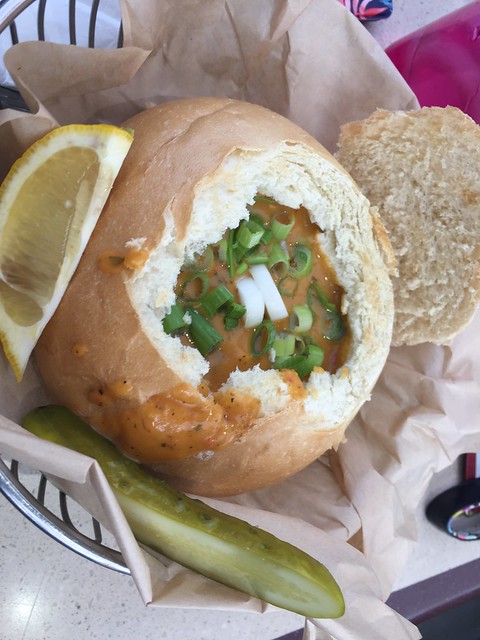 My delicious (and sideways) salmon chowder. I could really got for a bowl of this now!

Again, if you find yourself on a cruise that ends in Seward, take the train to Anchorage! It was very much worth it!

I will say the only downside is retriveing your luggage at the airport. We had quite a walk into the airport to get to the room where the luggage was stored and for us, there was not a really organized method of getting in and no formal lines. It was a bit chaotic and that was the worst part of the experience.