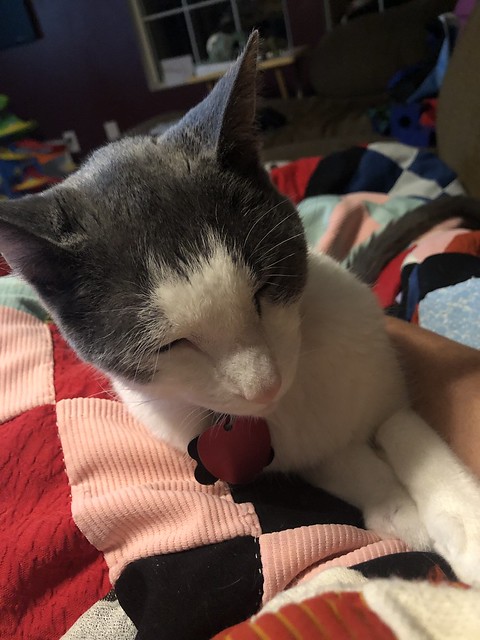 +This little 16 year old isn’t doing too well at the moment. He spent a few hours at the vet yesterday getting blood work and x-rays done on his abdomen. He’s dropping a little weight and hasn’t been wanting to eat and his behavior is very different over this last week. I’m waiting for some more blood results and the x-ray results but it may be a bowel obstruction of some sort. Which at 16—might be the C word. We aren’t ready for this yet! Our spry little kitten was going to live forever! Samson will be gone six years in August and it still seems like last year. So, send some good love to Leo via the interwebs!

+I’m sipping my first Starbucks drink after four months, a Venti Decaf Americano. Chris went to the store this morning and I had him pick me up a drink since there’s a ‘Bucks at the Kroger. I poured it into another cup once he brought it home. Ah, nothing like that first taste of a coffee!

+As for the grocery store, I’m sure you’ve seen how much Texas is in the news along with other states because our governors were all, “OPEN IT UP!” Our grocery store is in Harris county, which just issued a Stay At Home Order again, so we’re pulling back on grocery shopping again. We were still getting our big haul about every three weeks but Chris had started going once a week to get fresh fruit and any other random things we had run out of. Plus, he’s been doing some local (and a few non-local) field jobs this last six to eight weeks so he has been going to get field drinks and food as well. Now we will do our best not to sneak in those random outings again. I think I mentioned in my rant last week that when I had last gone mask usage was nearly non-existent. We stopped by last weekend on our way back from a hike and mask usage was already climbing. This time he said there was a woman at the door enforcing customers to wear a mask. He said some customers were grumbling about it but they were complying–I guess ones who wouldn’t left. Hmmm, maybe if we’d done this consistently two months ago?????

+With all of that we’re pulling back on our hiking as well. We were hiking anywhere from 30 minutes to 2 hours away and while I think we would be fine with our closer hikes in Sam Houston, doing the two hour stuff is a no-go again. For those we already took everything with us and planned for no stopping other than getting gas but that seems too risky now with hospitals filling up. We’ve also postponed a trip to visit my parents because of the drive and the exponential increase in cases. Not sure when we’ll put that one back on the tentative books.

+The Saharan Dust has been a bit of a downer here with none of those glorious sunsets others have shown because we’ve had rain and clouds at the same time. It was mostly a soup mess yesterday and today it is brighter but you can see it looks slightly yellow. Chris said he had dust splatters on his windshield this morning. With the rain this week our humidity has skyrocketed to unbearably disgusting after that wonderful week two weeks ago where it felt like late September and we had our first cool front. That feeling is a mere dream now as you are bathed in sweat seconds after stepping outside.

+My agenda this weekend is probably not going to involve a ton of outdoor time due to the humidity. I do have a pile of cucumbers to pickle and some beans to blanch and freeze. It has been a decent start to the summer garden and I’m kind of thankful that I don’t have enough tomatoes to can this year. Work has been incredibly busy and even trying to find the energy to do something with the harvest in the week has seemed daunting. Having to peel and can tomatoes would have sent me over the top. Some chores, maybe finding some reading time, and getting some play time in with Forest is on the agenda!

You’ve gotta watch the new video from The Chicks…

Time to get going!