I have a bazillion phone photos and eventually, when I edit them, photos taken with my camera. In the spirit of actually posting in some kind of real time perspective instead of months later, I’m just going to share the phone photos now. I’ll break up the flower garden and general snow photos into other posts this week. 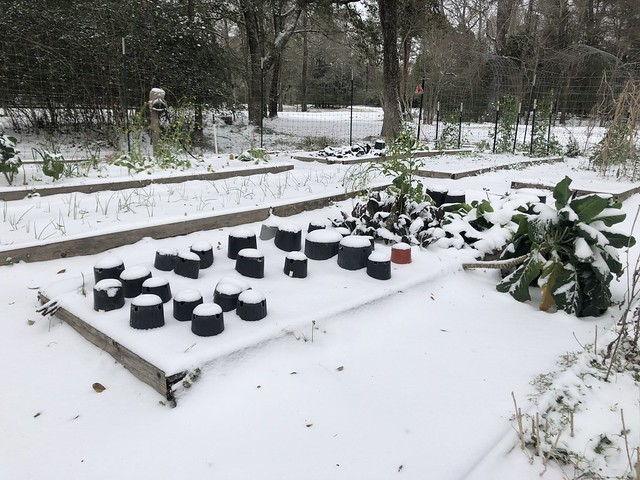 This was the edible garden on the morning of February 15th when I finally bundled up enough to venture outside. It was already very cold inside and the temperature was dropping rapidly there. It looked rather peaceful out in the garden and certainly better than having 2-3′ of water topping it as it has in the past. 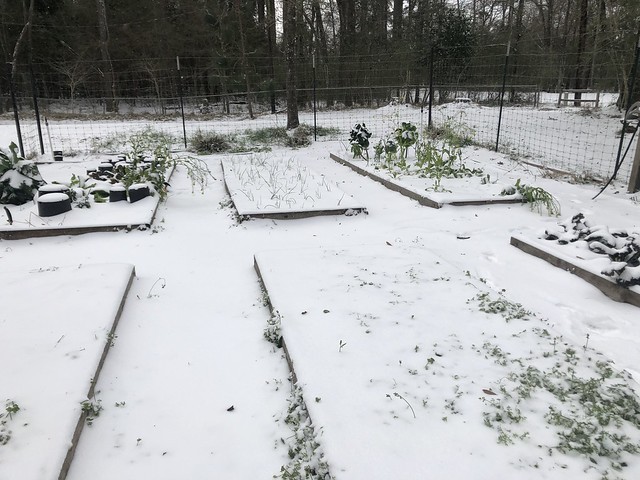 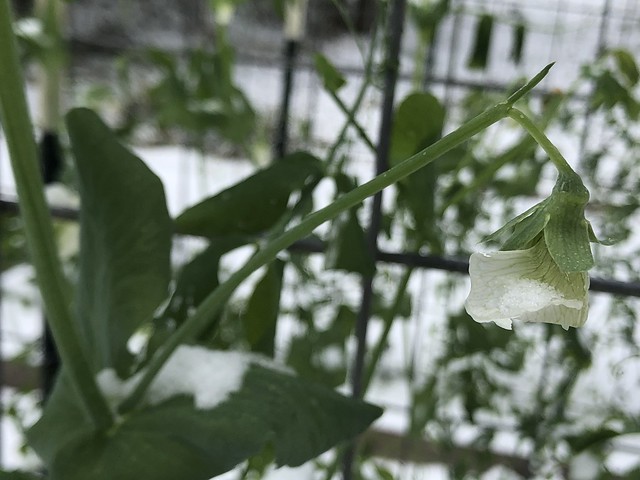 I did a quick walk around that day as there really wasn’t much to assess that wasn’t hiding under snow, or pots and towels. The frozen pea flowers were beautiful. 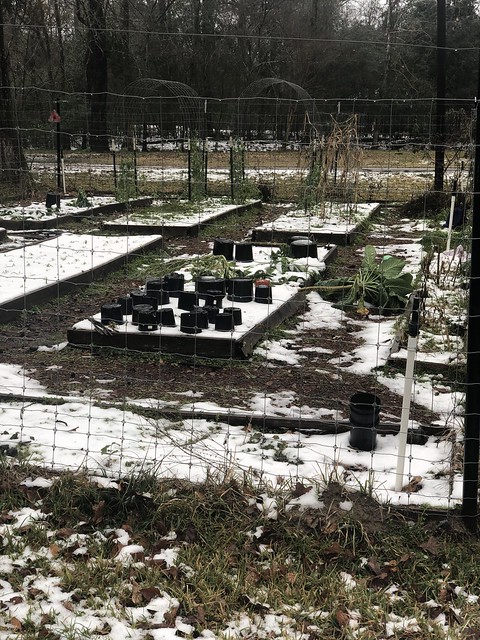 On the 17th I made it back out as we were starting to thaw with temperatures rising into the 20s, plus we had had some sun on Tuesday that really helped work on melting some of the snow in the sunnier areas of the yard. 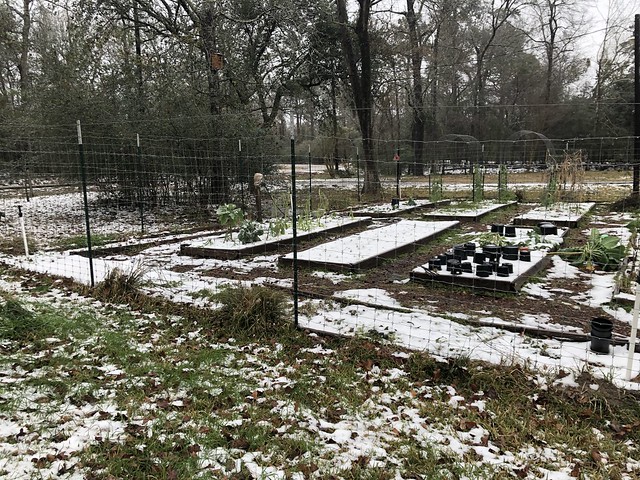 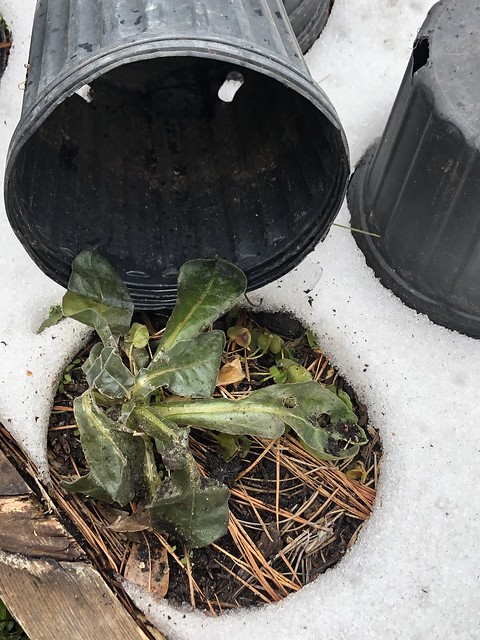 Finally on Thursday the 18th I felt like I could confidently uncover a couple of things and take a gander at the damage. It was in the mid 30s for a high that day. I found the pot off of this calendula and I’m fairly certain this plant is a goner. I covered it back up anyway because on some plants I’m just not sure what will or won’t come back. This kind of weather is new territory for us. 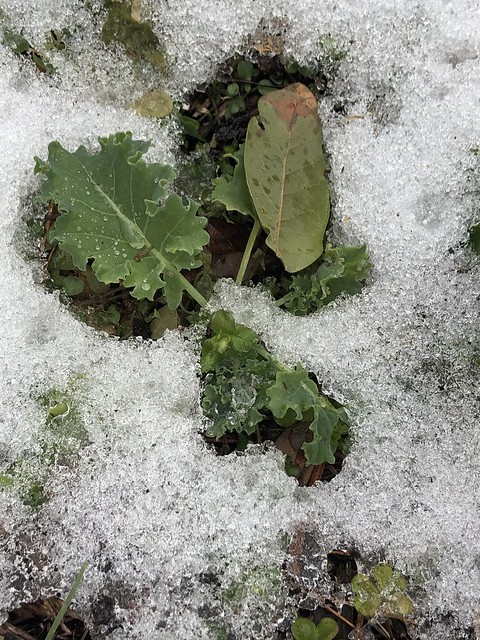 There was also a kale uncovered and it looked fine. 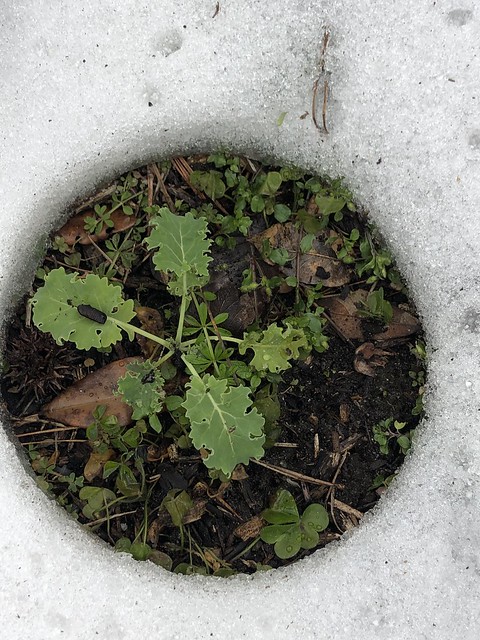 Which meant the kale under pots were extra fine! 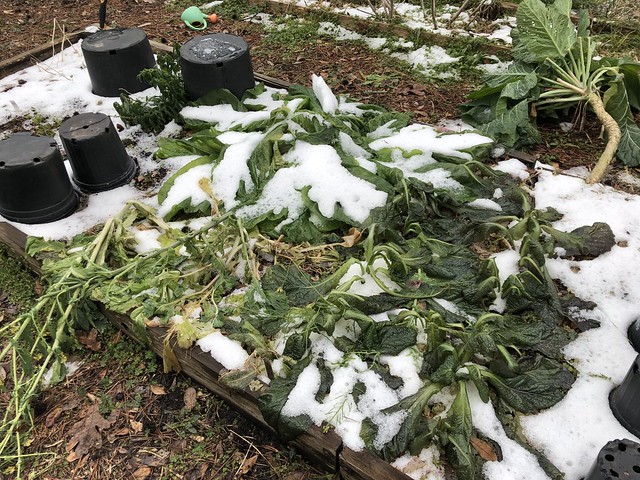 On the other hand, the mustard and Chinese cabbage I left uncovered was a pile of mush. I didn’t have enough blankets to cover or pots big enough to deal with them and I knew they were a lot more susceptible to the cold than the other brassicas. Many were already bolting and I didn’t feel like trying to baby them. So long, mustards! See you next fall! 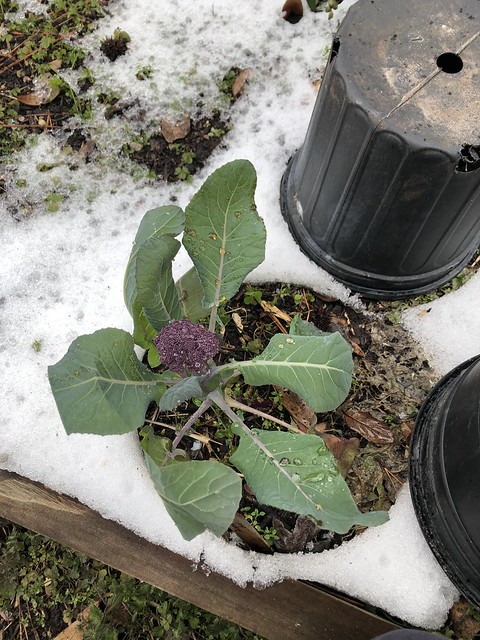 I was delighted to see my cauliflower also pulled through! 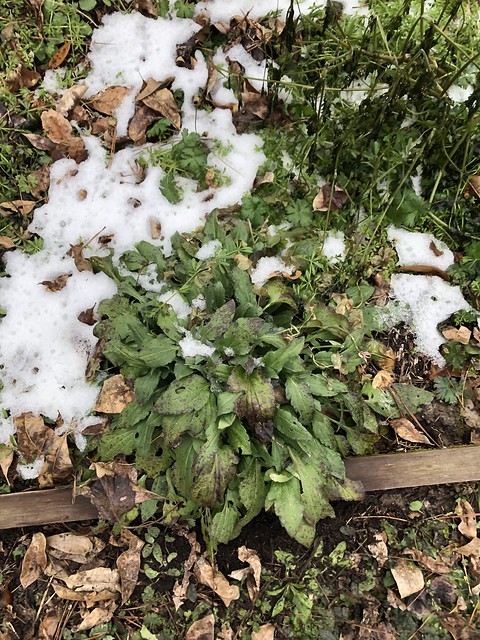 I did not cover any rudbeckias that were out there and they also seemed to have pulled through with no problems. 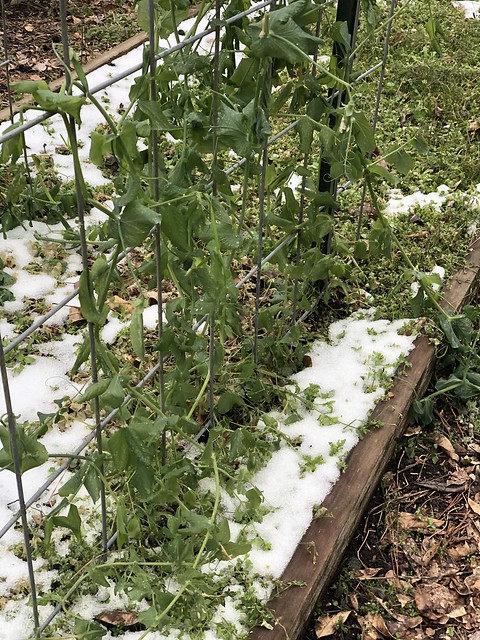 The sugar snap peas look like they want to live but are damaged from holding onto snow and ice. 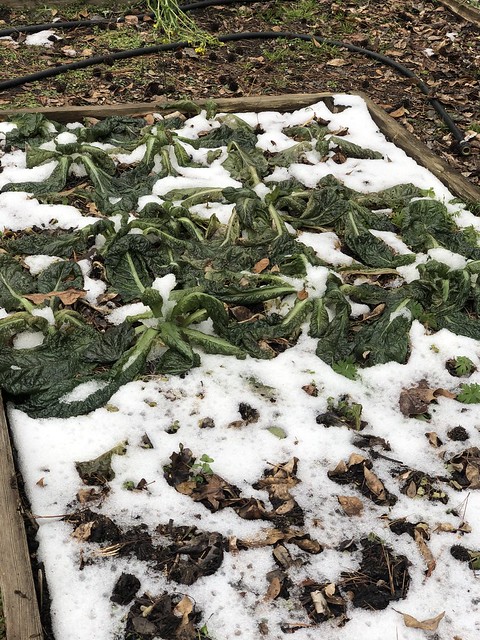 The red giant mustard, which just a week ago was look beautiful in its burgundy hues, flattened on the ground. I think some of the centers could pull through but I was already fighting aphids on them and am just fine with this bed being emptied. 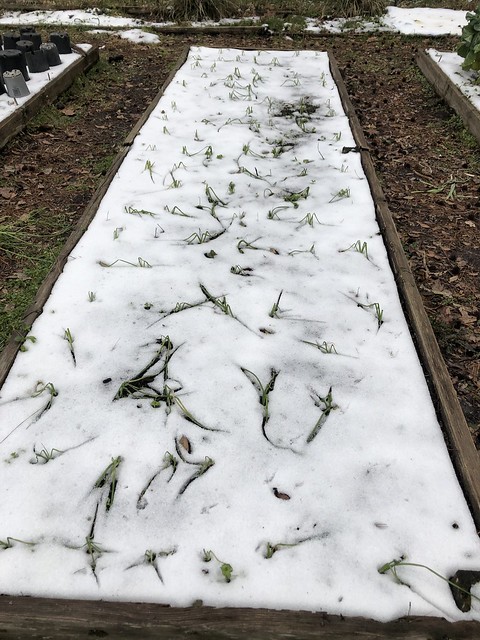 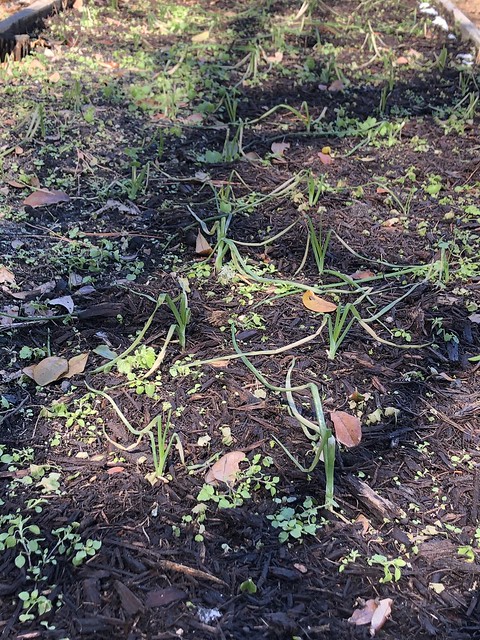 The onions looked beat down on Thursday but when I went back out on Friday I think their stems are strong and they will regrow just fine. 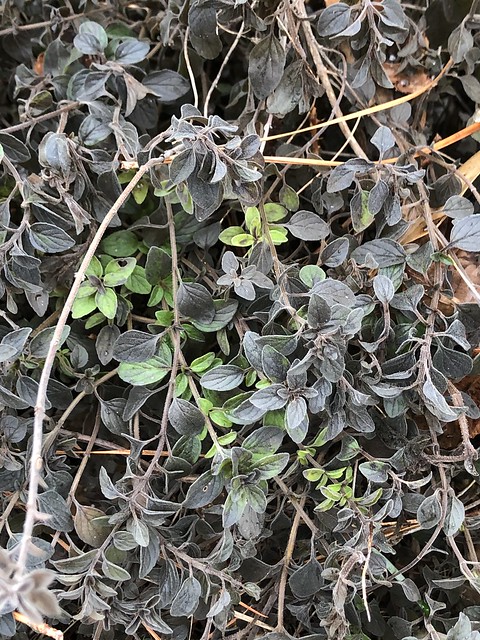 My lovely mound of oregano was severely burned on most of the plant but as you see, underneath there are green leaves. I think all this will need is a trim back and it will be fine. 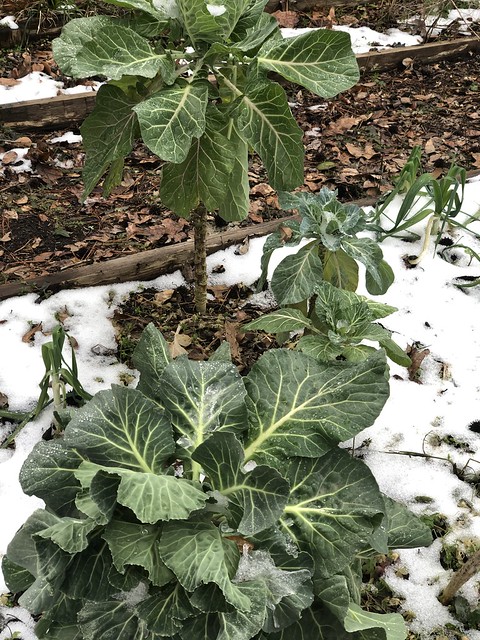 I also left the collards uncovered and they came through just fine. 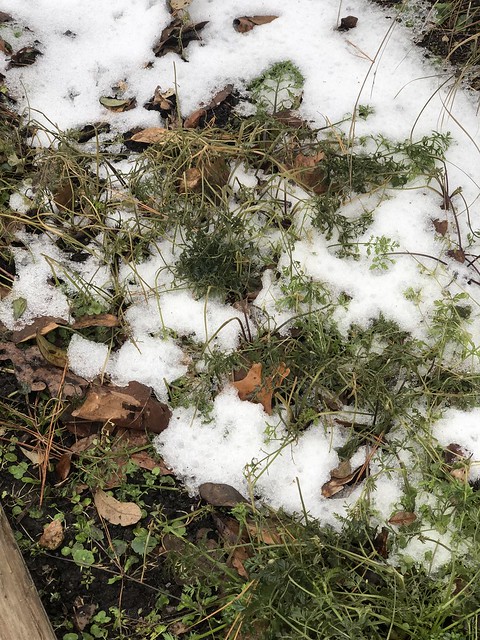 The carrots are to be determined. Their tops were burned considerably and I’m unsure if the roots themselves are going to be mush or not. I may just harvest whatever is there and we can eat on them in the coming weeks. 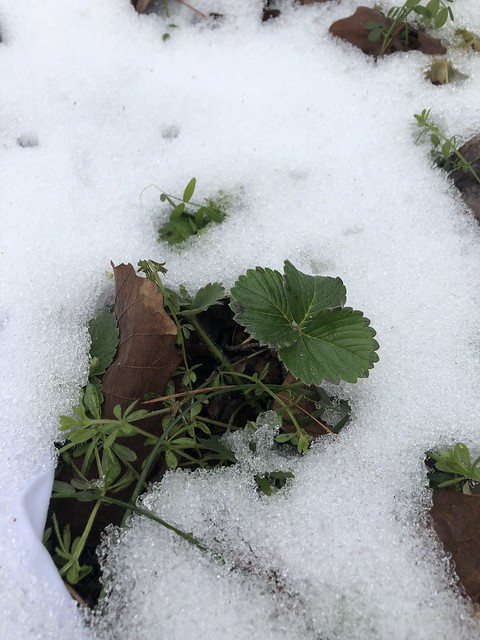 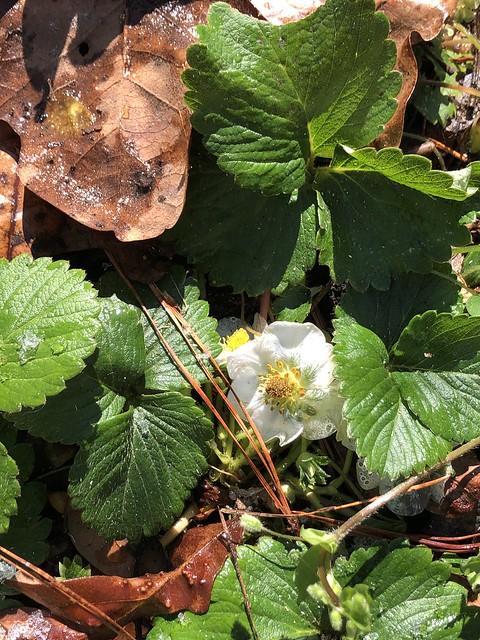 I was delighted to find that the strawberries looked unphased completely by the snow. I put two sheets down on the main section of them and as you see missed a couple of plants that were off to the side. When I finally pulled the sheets of the strawberries yesterday they looked fine, though any flowers that were there last weekend are gone and I’m unsure of the early fruits that were beginning. But we have plenty of time for more flowering so this will be good!

So, that’s the update out there for now. I am going to remove all of the pots here in just a bit and drag in sheets and towels to start loads of laundry. I’ll work on removing some of the sloppy mush from the plants that are definitely toast but will hold off a bit on other plants until I can see what their fate may hold. It will be wait and see, especially in the flower garden, for a while.

The snow was fun, but I would have appreciated it a lot more in January when everything was still dormant! Now, I’m ready for spring!

2 thoughts on “The Edible Garden During and Post-Deep Freeze”