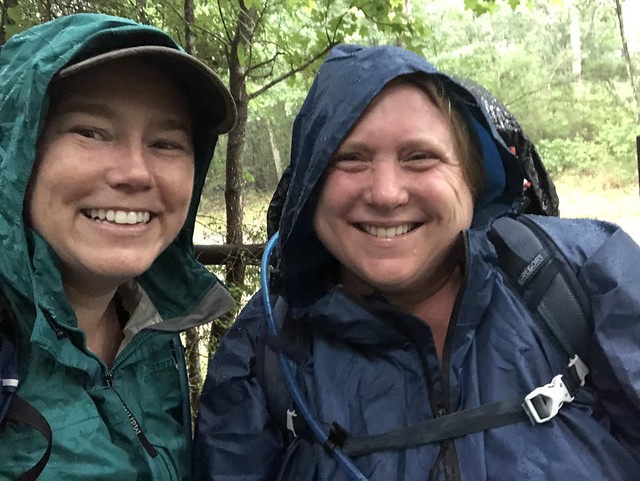 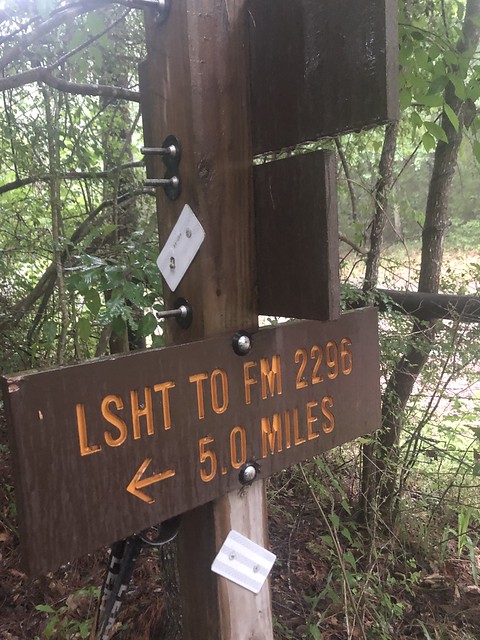 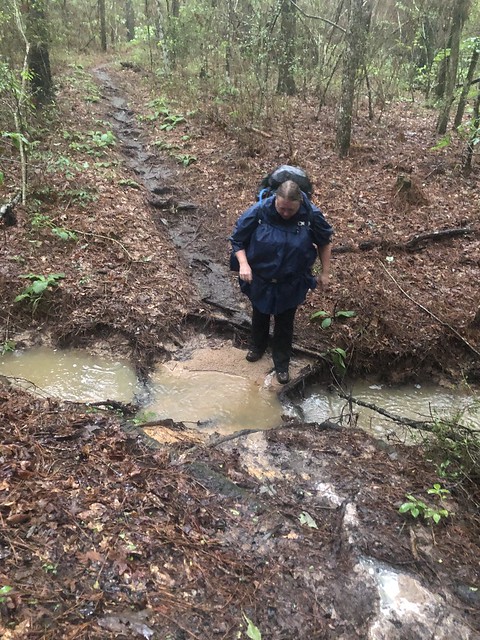 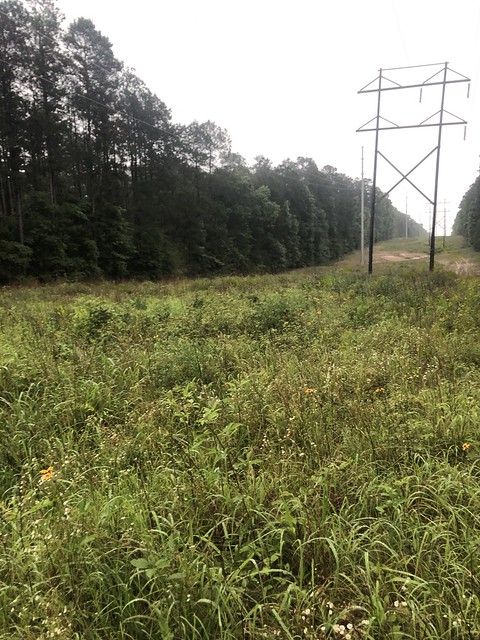 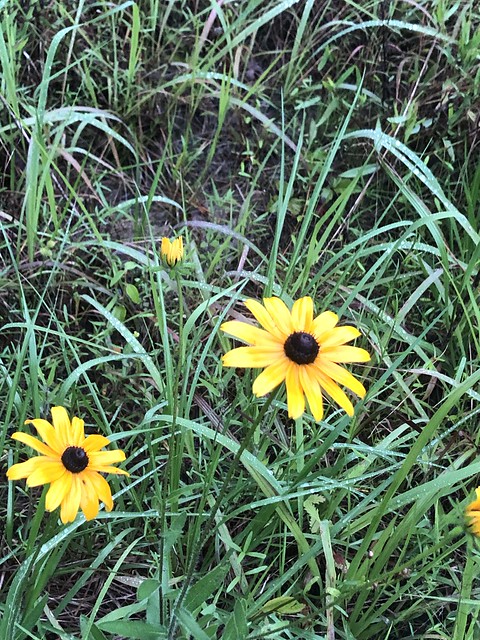 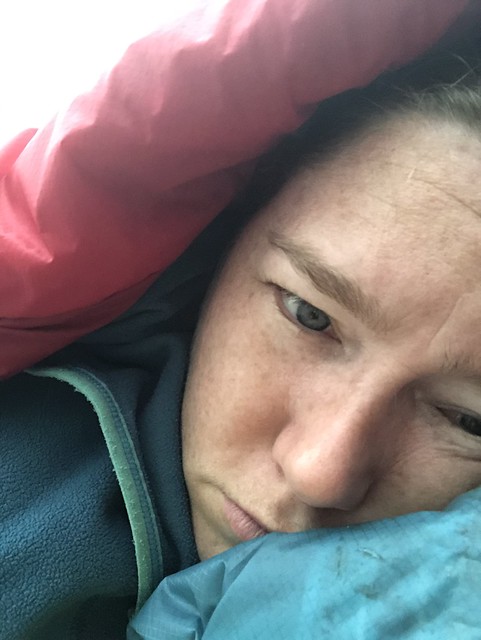 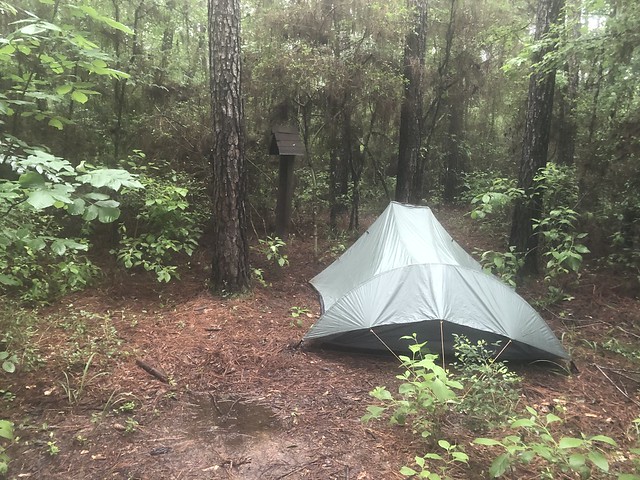 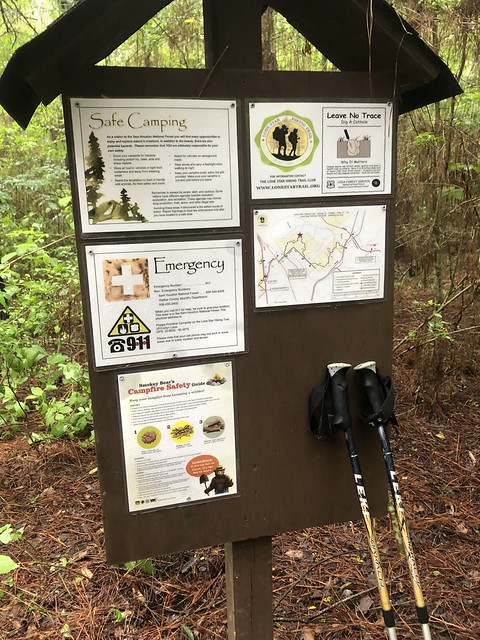 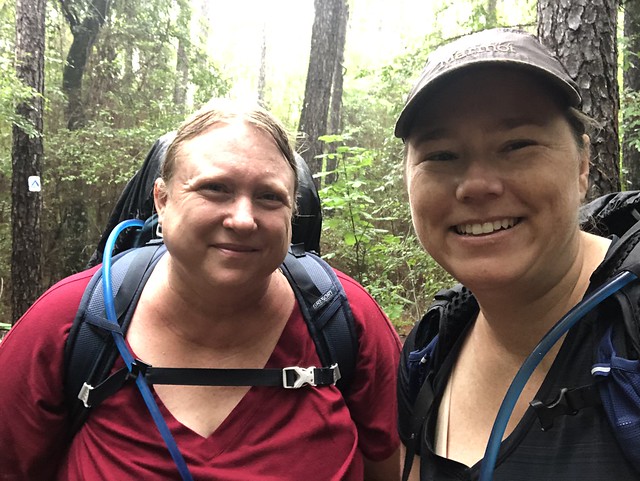 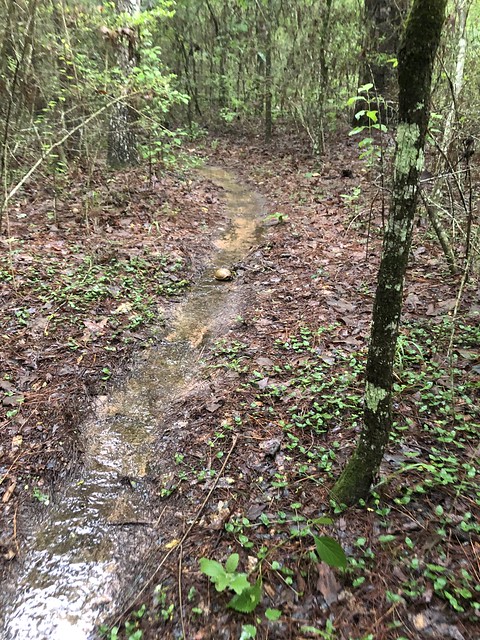 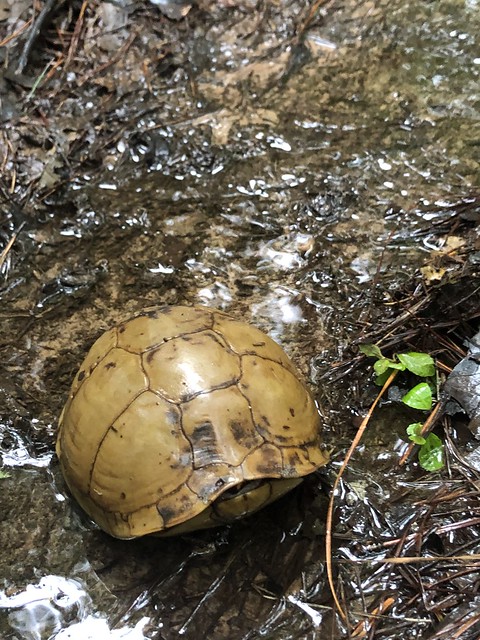 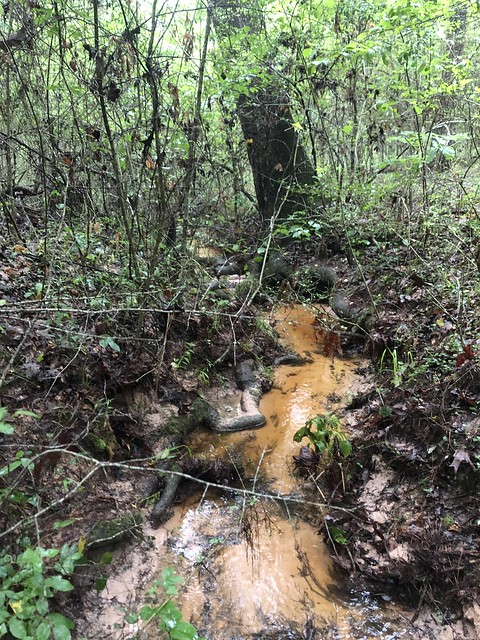 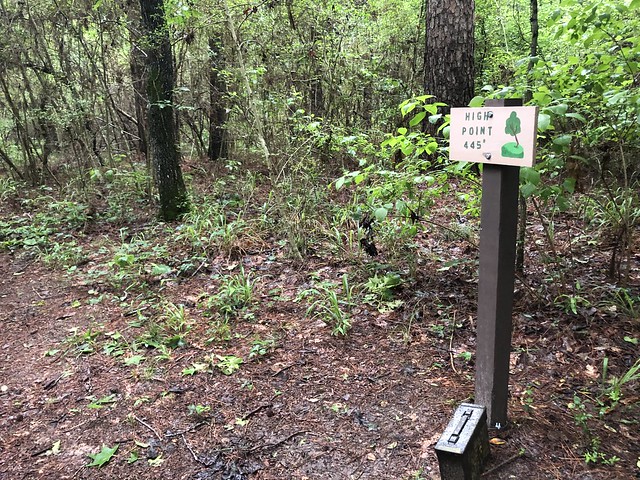 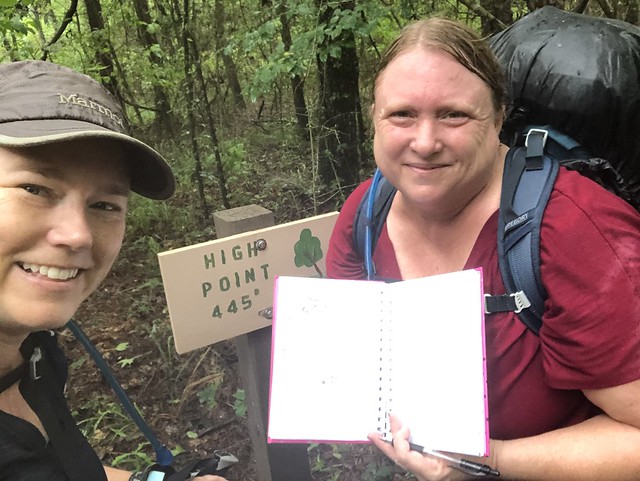 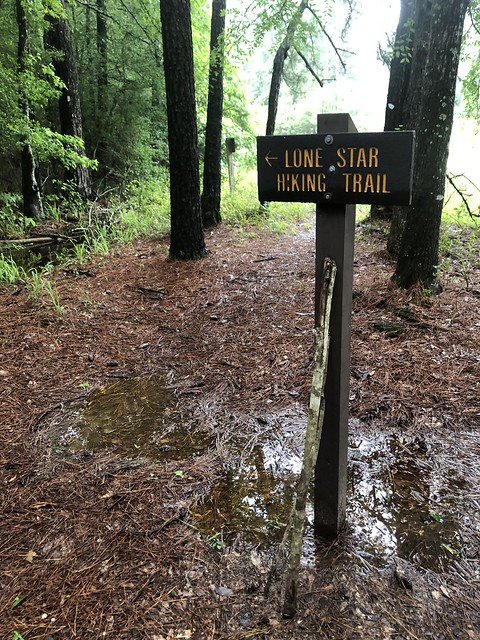 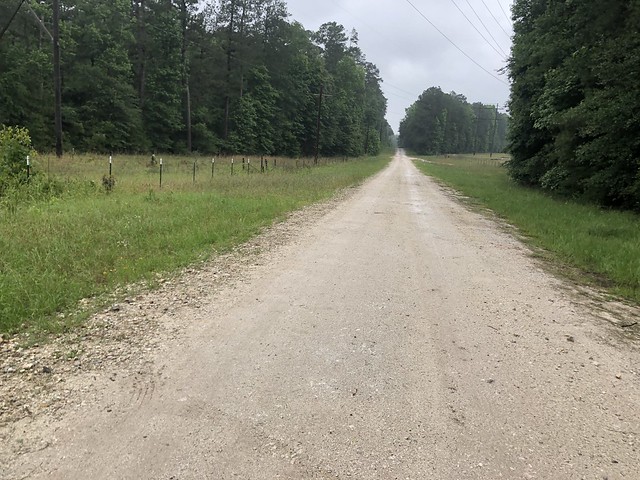 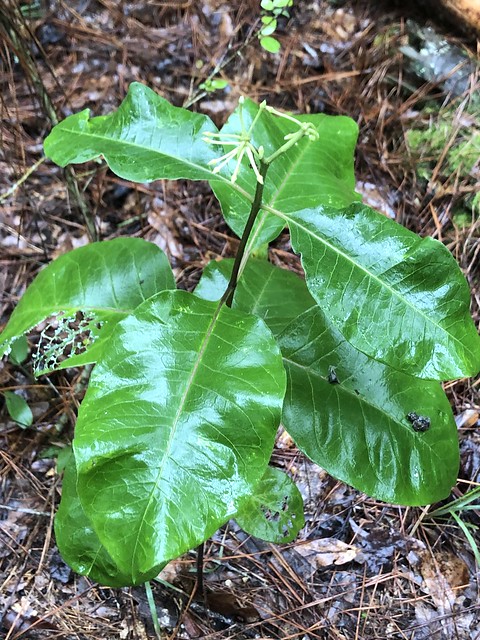 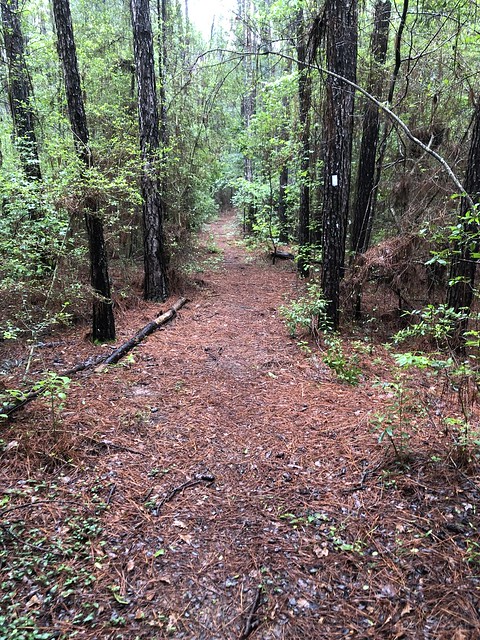 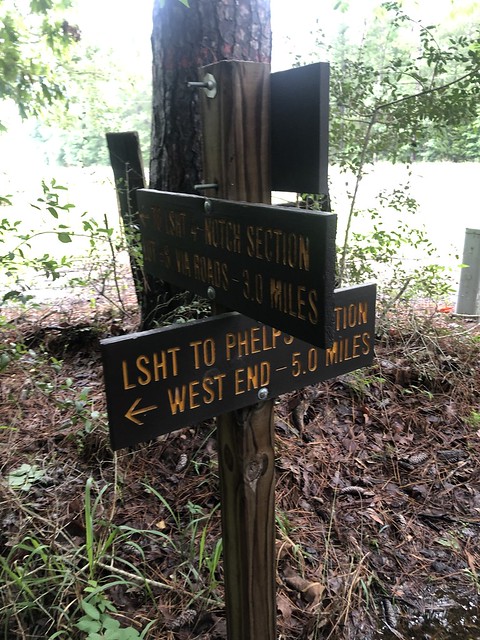 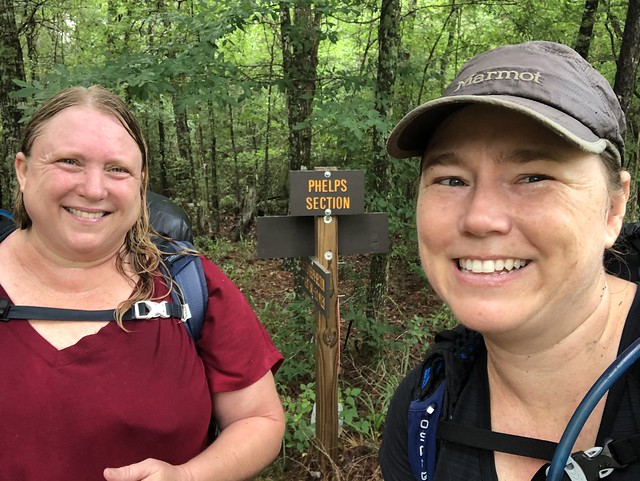 Earlier this year my friend Keely had inquired if I wanted to attempt to go backpacking with her and another friend. This was before vaccines were prevalent and at that point I hadn’t had mine, so I declined. Well, a few weeks ago she emailed again and asked if I had my vaccine yet and if I wanted to go backpacking. Of course I did! We pinned down a date and of course as the time got closer the rain chances went up. In fact, it’s been rainy for the last week! First it was thunderstorms coming from the west and then an unnamed tropical system came up from the Gulf and has been dropping rain. Good times!

Last Wednesday we altered our plans for this rain contingency. We had planned on a 12 mile loop connecting the Richards and Sand Branch Loops on the far west side of the Lone Start Hiking Trail. Knowing that the Sand Branch section could easily be pretty wet and also knowing that the trails there had been sloshy when we went a few weeks ago, we searched elsewhere. Of course, the further east we got we ran into bayous and tributaries that flow into the San Jacinto River as well as the San Jacinto River being an issue, too, so sections on the east side weren’t really open to us. But then I found the Phelps segment up near Huntsville. It was only a 5 mile section, had a campsite one mile in, and is the highest elevations on the trail—plus no major bayous or drainages, just some small little ephemeral and intermittent streams. Sounded like a plan!

Of course, the rain continued all week but the hourly forecast suggested it would taper off in the evening on Saturday. And if we were hiking a mile in, we could start fairly late in the evening. It would be wet, we knew, but why not just go for it?! So, we did!

On the drive up there the rain was hit and miss. Some roads hadn’t seen any rain and others had downpours. I hoped we would luck out but as I sat on the shoulder waiting for Keely to arrive at trail mile 42 on FM2296, the bottom finally fell out. There went that hope! We left her car parked there and shuttled my car to trail mile 37 on Evelyn Drive where we sat in the car for 45 minutes while the heaviest rains passed. Finally, I decided we had to get on the trail otherwise it would get dark on us. So, at 6:45pm we headed down the trail in a light rain. It wasn’t that bad, actually, and I have a strong aversion to hiking in the rain from a few experiences on the AT. But I knew I would be home the next day so that relieved that worry a bit.

We made it to the campsite in due course and then had to figure out where was the best place to set up the tents. The campsite had a single tent pad and a fire ring and someone had left a camp chair there, which ended up being perfect later that night as I sat in it with my rain pants on to eat my dinner. But there were other cleared areas around the site in the woods a bit where other hikers had camped. They looked promising until we walked on them and the ground was soft, soft, soft. It didn’t take much for my boots to sink a bit and water to slosh up. Great.

I ended up finding two, more solid areas, one in front of the tent pad (which, the tent pad was a puddle of water), and another near the entrance to the site. Keely took the tent pad area and I took the campsite entrance. And wouldn’t you know that minute after getting our tents out, the light rain turned to moderate to heavy rain. Now, also, mind you, this was the first time I had set up this particular tent. It’s a 3-person tent that we got so we could take Forest on our backpacking trips and we’ve used it several times but Chris has been the one to set it up. We had our Big Agnes tent from our thru-hikes that I can set up no problem, but the fly needs to be repaired and we haven’t done that. So, I had this new tent and had watched a video on how to set it up a few times right before I left. It wasn’t hard, just a little different. And while I was making progress with setting it up, my problem happened to be the soggy ground. The tent stakes would. not. hold.

So, Keely is making progress with her tent and I am playing this asinine game of setting one side up and its good, only to get to the other side (which requires my hiking poles to keep that side up) and the stakes for that line on the entrance don’t want to stay, and every time I try to pull it taut, the back side stakes come loose. Meanwhile, it’s still pouring rain and there’s a nice pond going inside the tent. Thankfully there’s mesh along the bottom sides of the tent and I knew I could easily get the water out and wipe it down with a bandana (of which I brought three of because I just had that feeling…) Finally, Keely’s tent was mostly up, though water was also now an issue for her too, but she was able to come to one side and hold it while I got another side up. Then I finally gave up on staking the front and realized I had my bear bag rope and I rigged up the front rope of the tent to that rope and tied it to a hickory tree right in front of the tent. One problem solved!

Eventually the rain lightened up, after many checks of the radar with my head hunched over the phone in an attempt to keep the rain off of it, and I was able to get the wide sides of the tent staked, too. It took forever for one of them because the soil was so loose and moist, that I had to jam a bunch of twigs in with the stake to get it to even think about staying. I told Keely later that I was thisclose to saying “Eff it” and going back to the car! But her help and the idea for tying the tent rope to the tree helped make that be a fleeting thought.

I managed to dry out the tent as best as possible and get everything set up in there. Before we had left our respective houses, I had texted to let her know I was bringing a sandwich for dinner so I wouldn’t have to cook and was doing bars for breakfast. No stove, so easy! She did the same and so she ate her sandwich in her tent and I sat on that camp chair while I ate, head lamp on at like 9pm. It was an event but we made it work! If there had been a chance for rain that night we wouldn’t have made the trip but we knew it would clear up and that’s why we opted to go.

The next morning, after a fitful sleep, we woke around 8 and slowly got up and going on the trail. The trail itself was a combination of wet and dry, some areas soggier than others. The mosquitoes were terribly so we didn’t stop much for any breaks. There was one small road walk along a dirt road that was nice to walk on and be dry for a while. I was glad to have just bought brand new boots about a month ago and my feet were never wet, except for a small section that splashed up when we had a deeper creek crossing we couldn’t just jump across. We were out of the woods by 11:15 and glad to see her car still there. We shuttled back to my car to arrange things and decide where to go for lunch in Huntsville, hoping to get breakfast, and definitely some coffee.

It was a short hike and a quick trip but I really enjoyed it despite the rain. First, it was my first backpacking trip where I wasn’t with Chris or anyone in my family. I had been wanting to go for a hike solo at some point soon and this was a great transition to that. Plus, I was getting to hang out with a friend I really don’t see too often–she lives on the south side of Houston and has a full life and I’m on the north side of Houston and have a full life. We actually met because we were into nature and hiking and I found her blog when I moved to Houston. The trip was the start of hopefully more trips on the Lone Star Trail and maybe other trails with Keely in the future.

I think one thing I need to think about for future backpacking trips is my NeoAir sleeping pad. My lower back killed me on Sunday when I got home. I bent down to try to do something and had a horrible time trying to straighten up. I’m unsure if it was just not being used to that pad from not doing a lot of backpacking in recent years or if I’m aging out of it as my body ages. I love that pad—it’s lasted thousands of miles and takes up minimal space, but it is something I’m going to have to note next time I backpack and see if I need to find something else.