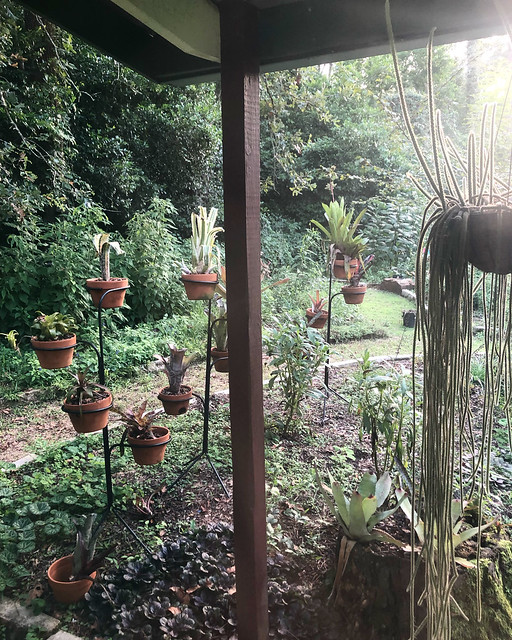 The first of August and the end of August seem like entirely different years. I came home from my weekend away from friends and peered out the window in the stairwell and thought the garden was looking lovely. That tropical cactus makes me so happy when I see it and it is growing like crazy right now. 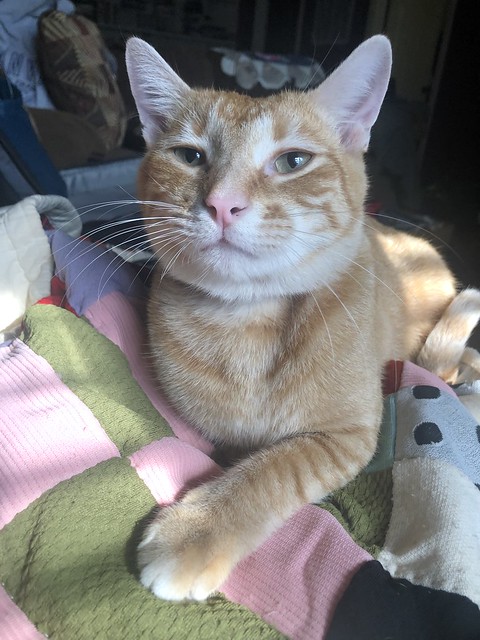 Rusty is becoming *my* cat in many ways. He’s also a bit of a jerk, albeit a cute jerk. He loves to cuddle while I watch tv and will sleep up next to me in bed only after he’s been very demanding about getting pets on his head. He loves his scritches but don’t lean in for a kiss because that’s just too much and he will bolt. But his favorite thing is to jump up in the middle of the night, thrust his head under my hands or arms and if I don’t respond to his demands he will start love biting and really demanding attention. Oh boy, that cat! 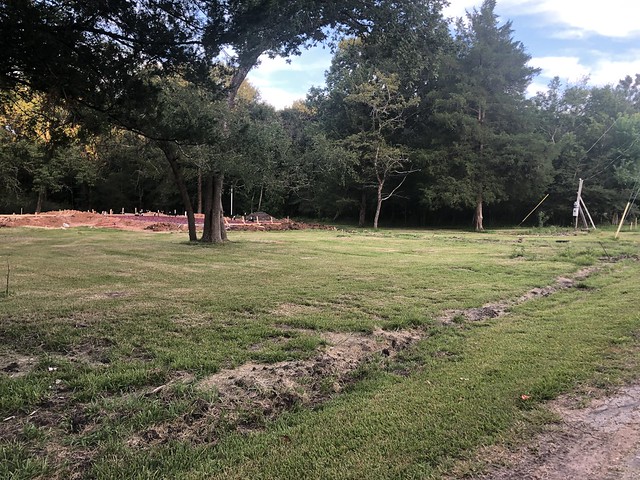 Building has continued on what was my green milkweed lot. In mid-summer I thought that I might be able to access some of the milkweed that was growing back from being mowed in late spring but alas, they mowed again. Now all that is left are some spotty milkweed that is near the anchor line to a telephone pole, where a pile of glass is slowly being hidden by the grass and milkweed—a place I didn’t venture over to when I was getting milkweed. Now, the milkweed that is mowed is still very much alive, those root system are very much intact, but constant mowing isn’t going to allow for the above ground parts to grow again this season. 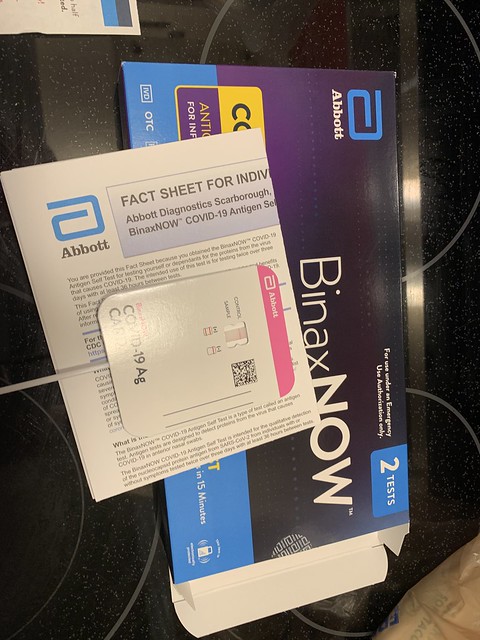 The weekend before school was to start Forest and I had some sinus/cold issues and because we all know those symptoms are very overlapping with a certain virus, Chris went out and bought an at-home test. It was negative and after a few days of DayQuil/NyQuil I was feeling better and Forest was able to start school just fine. Speaking of that virus, since the Texas Education Agency announced districts needed to let parents know what was going on with cases, they started updating their dashboard which they hadn’t been doing. I was also able to check the DSHS data from last year—408 cases for students in our district all last year. Now? According to the dashboard this morning 256 total cases (students and admin) in the last three weeks since school started. The DSHS had a higher number than the school district is posting according to a spreadsheet that was last updated on the 22nd, because there were some presumed cases and the district didn’t advertise those. So far it seems only 5 students at Forest’s school have been positive but again, who really knows. 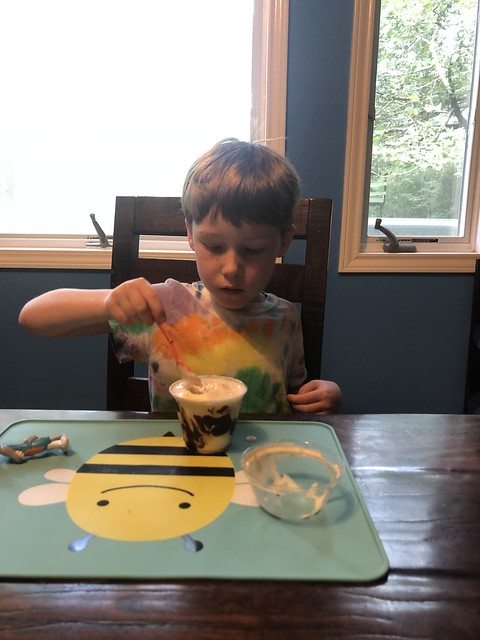 A Sonic hot-fudge sundae is always good treat. Forest eats about 1/4 of it and then I finish it off. 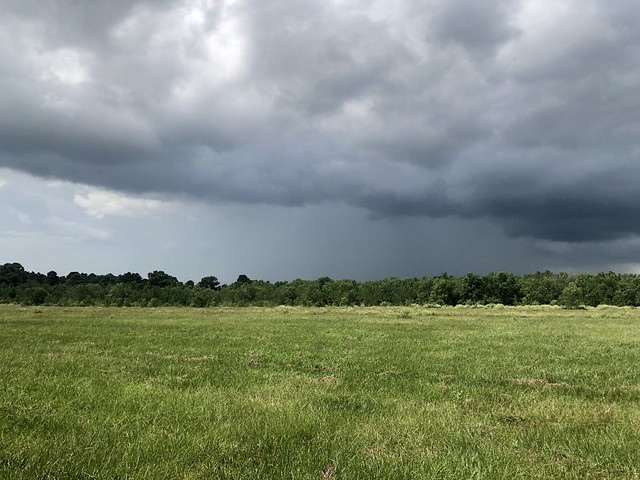 Racing a storm at Kleb Woods one day at lunch. 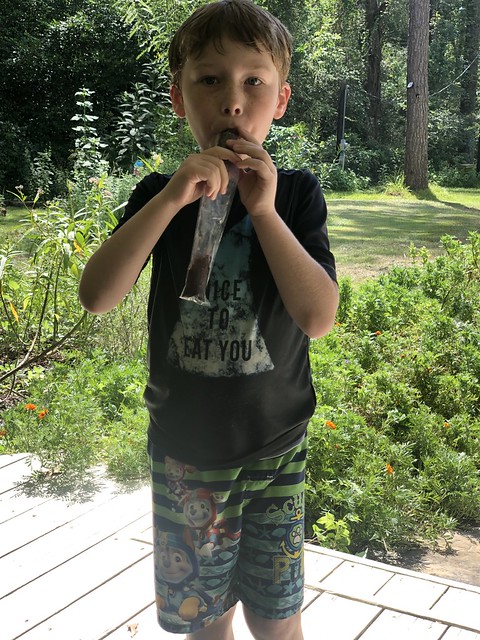 Summer popsicle breaks…squeezing in as many as possible until the weather cools. 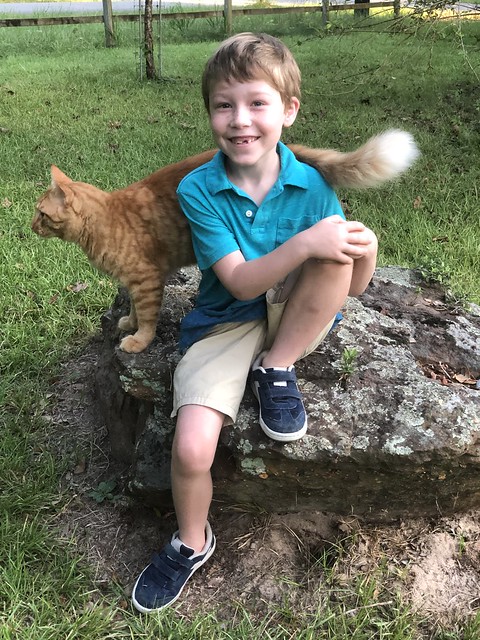 And of course first day of first grade photos, with a cat (Miles) bombing the photos!