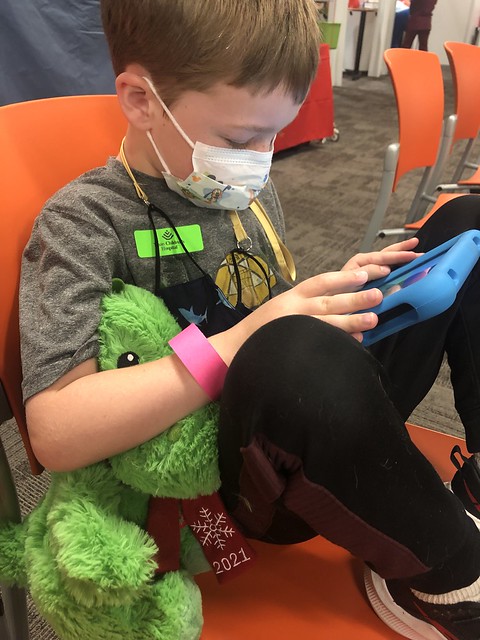 Yesterday, Forest and I got up well before dawn to drive over to Texas Children’s in the Woodlands to get his first Covid-19 vaccination! What a monumental feeling to know we are finally here! I know the 0-4 year old parents are also quite antsy and I hope it is approved for them soon, too.

The day the FDA approved it I was able to find an appointment for the 10th at Texas Children’s in downtown Houston. I’d gotten the tip from a friend who’d already made appointments for her kids, which were for today. Then on Tuesday evening this week, after the CDC approved it, Chris was on the Texas Children’s website and saw appointments released for this week. He managed to snag the 7:10 am one—they were going fast, just as the ones I tried to get last Friday were going. You would click on a time and it would come back to say it was unavailable. And then you would reload and five time slots had been erased. So, early morning it was!

Forest wasn’t thrilled and cried, which is not unusual as he did not like the flu shot he received in September either. But the staff at the hospital were already prepared with a movie on in the waiting area a choice of a free stuffed animal or a bag of goodies. He chose a dinosaur stuffy which turned out to be a squeaky dog toy donated from PetSmart! When he saw it after getting into the car when I picked him up from school later that day he named it SeFee. Don’t ask! I have no idea what it is named after.

I dropped him off at school after the shot, after we stopped for donuts and Chick-Fil-A, and when I picked him up he was fine. No reactions so far. Just a sore arm for a bit. I’m hoping that’s the same for the second shot here in three weeks!

So glad we are moving forward with this at least. I hope this pandemic ends sooner than later but unfortunately I think we’ll be balancing various strains of this for another year or two. At least we’ve made it to this step, finally!