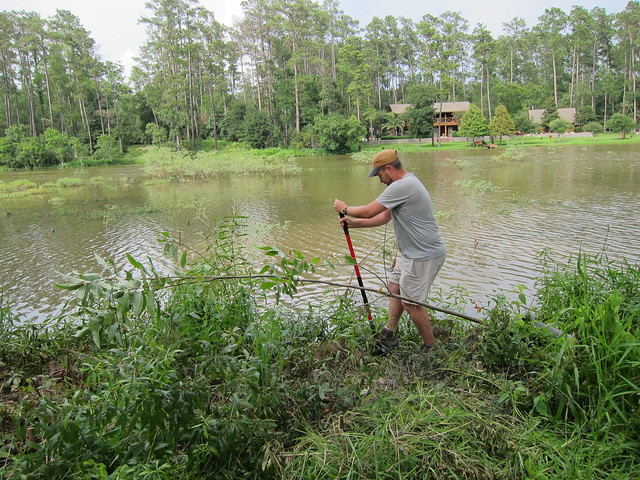 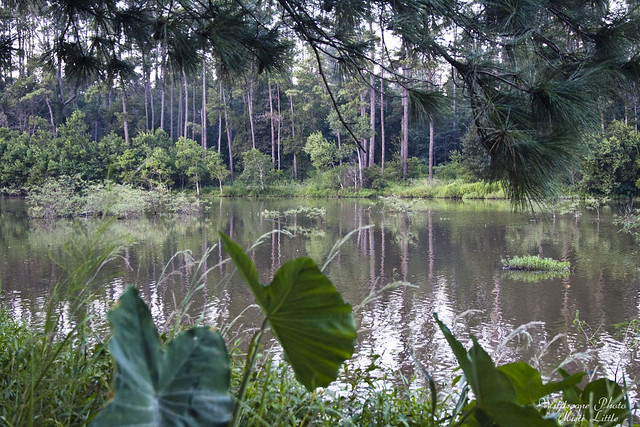 So, before I start this post let’s travel back in time to late June and early July 2012 when we moved into our house. We were coming off of the 2011 drought and even had some drought conditions (and flood) throughout 2012, which also meant some lower water levels in the pond our property abuts. You can see Chris here getting a hole ready to dig to plant a new tree, a water tupleo which died last year, likely from the deep freeze we had. The hailstorm a few months later didn’t help when new leaves were coming out. But, I digress.

The stream that feeds our pond has brought a lot of silt into the pond in the last decade through the several floods we’ve experienced plus the general water flow from typical rain events. That’s caused a lot of the upper reaches of the pond to begin filling in and the general flow of stream into the pond has changed paths as areas have filled in. I didn’t feel like doing a Google Earth comparison here but suffice to say, aerial imagery comparisons over the last 40 years show a steady siltation occurring on the northern end with it increasing rapidly in the last 10 years. Ideally this would be dredged to maintain this as a pond but because our city’s civic club owns the two lakes in the city (we’re a glorified HOA) they don’t have the funds to do this because our homeowner fees are too little and we spend most of our money every year on fireworks (grumble, grumble). Which means we would have to raise money to do this and I am already having trouble generating interest in raising money for new playground equipment, so who is going to want to find grants or do fundraisers to dredge a pond? Suffice to say, this pond is going to slowly be filling in. Oh, a smidge of backstory—this pond was never fully dug to the depth it was supposed to because a tropical system came and dumped rain and filled the pond and no one bothered to finish the project. At least that’s the history we were told.

Oh, another quick note, you can see the Sesbania in the middle of the pond here that came in when the water levels were lower during those two years, they mostly disappeared from the deeper areas of the pond afterwards. 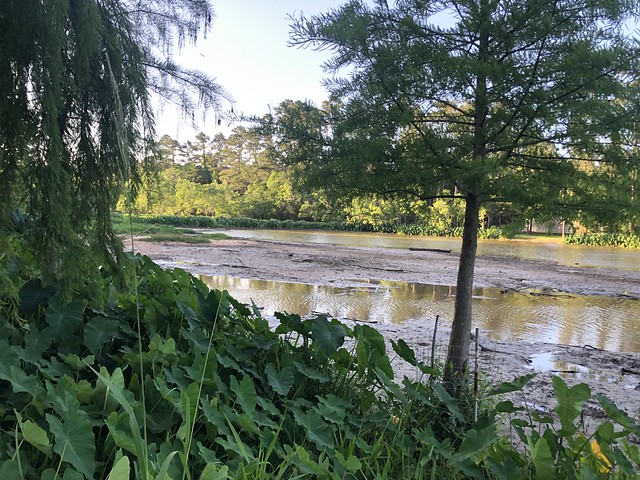 Moving forward to this spring and of course by late April we’re heading towards a drought and by May it is becoming apparent things are drying up. I took this photo May 29th after escaping outside from my Covid induced quarantine upstairs to get some fresh air for a few minutes. A few days before this my parents had been visiting (before I knew I had Covid) and my dad had mentioned that he thought the pond levels were kinda low. Well, I had mentioned that yeah, it was a little low because of the dry weather the prior six weeks but I hadn’t been down the pond in a while so I didn’t know how bad it had gotten nor did I know or realize water was actively being pumped out to the other side of the dam!

Our dam had been in need of repair for several years and the city was able to get a TGLO grant to get it repaired and upgraded for a flood control project. No water was supposed to be pumped out at all and in my Covid induced haze I had heard a generator running but we didn’t realize it was because they were pumping water out of the pond. Mind you, this was all happening over Memorial Day weekend and what my dad saw on Friday versus what we were seeing on Sunday to Monday was a drastic drop in water levels. And at this point, work crews had left for the long weekend and yet, the generator was still running, pumping water—when this wasn’t the plan at all. Chris made some calls and finally got ahold of the project manager and hours later, it was finally turned off. So, what would have been a small lowering of the pond was now exacerbated by the pumping of the water out. Chris was concerned because of the high heat and lower water which meant worse dissolved oxygen for the fish, plus you pump out the entire pond, goodbye fish anyway! It wasn’t a good situation and we’re still really irritated about it. 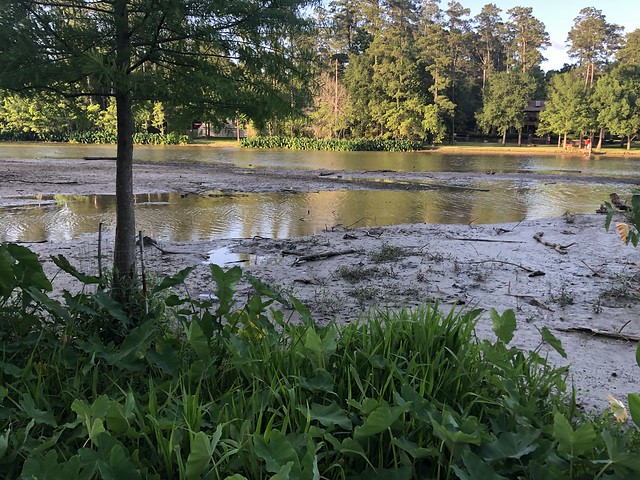 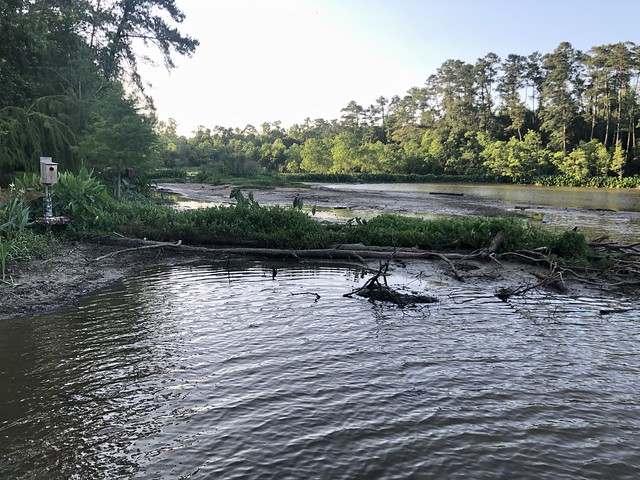 These were two pine trees that came down during Hurricane Harvey and Chris was unable to safely remove from the pond. Over time a little wetland has built up behind it because of this, which is sometimes nice because we get lovely blooms of Bidens laevis in the fall.

It was already disheartening to see all of this at this point in May. 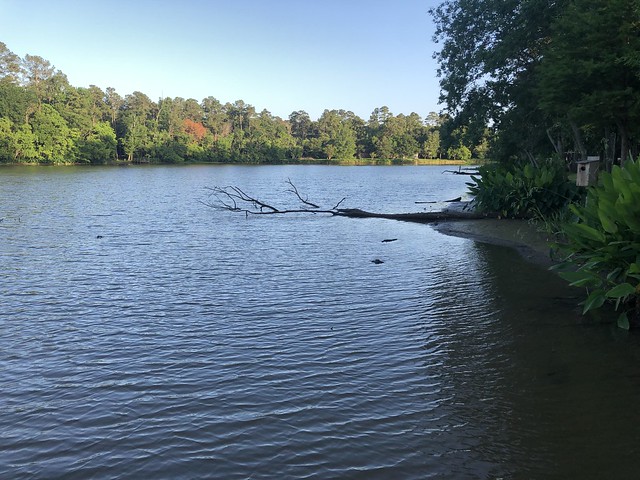 But at least there was still quite a bit of water. 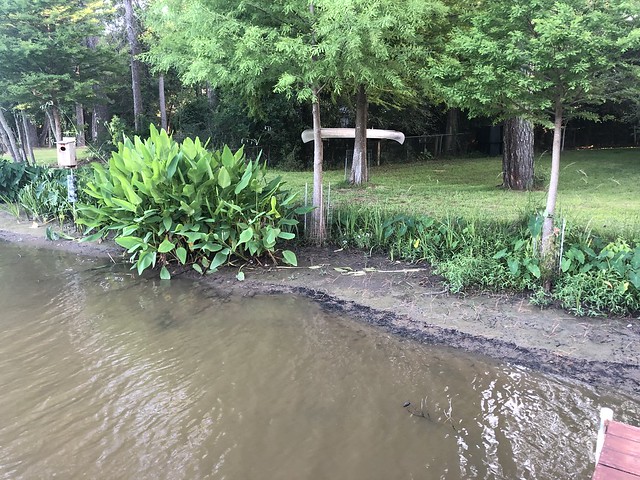 And the shoreline wasn’t too bad. 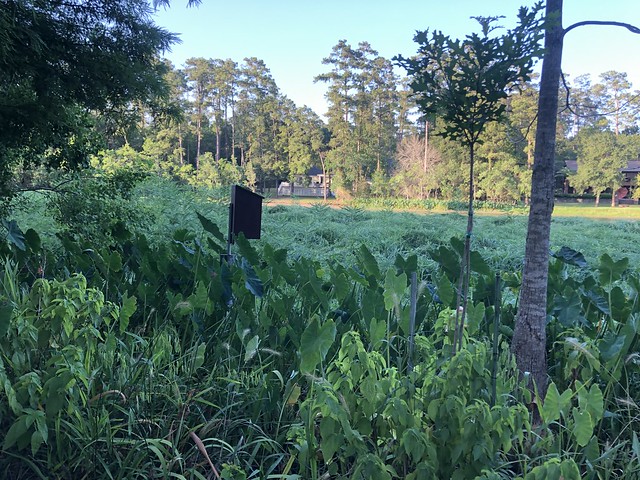 But, I hadn’t been back down there in weeks because we’ve been so busy and my time outside is usually spent watering plants in the garden and then going back inside to the A/C because it is so hot. But I’ve been noticing changes from out our windows so I went to investigate. This was the mud flat back in May and is now colonized with sesbania and various cyperus species. Thankfully it is not one large mass of taro, which a lot of our shoreline has been converted to (see foreground along shoreline :|) 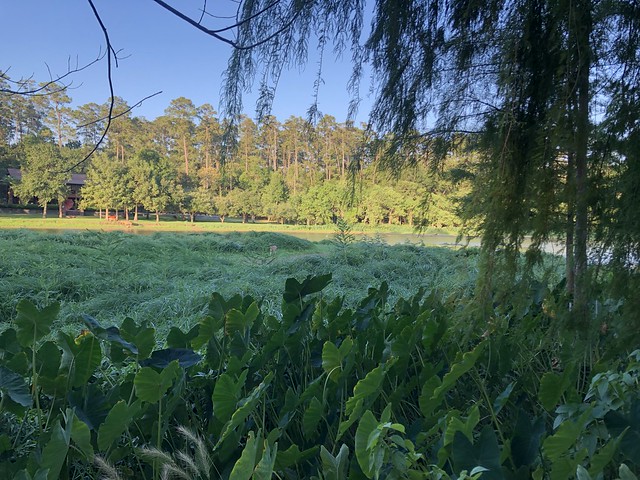 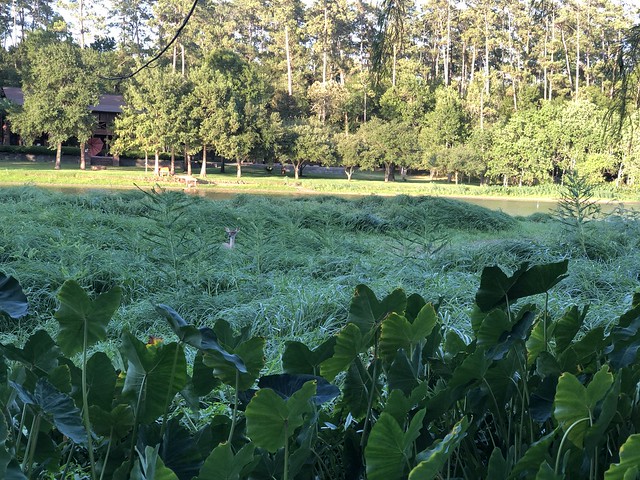 The deer have taken to venturing out there! Back in June, Chris talked about planting a few cypress trees out here and we still may do that at some point. But, the feeling was, this will likely never be dredged. We might as well make it a nice wetland if it is going to be a wetland now. 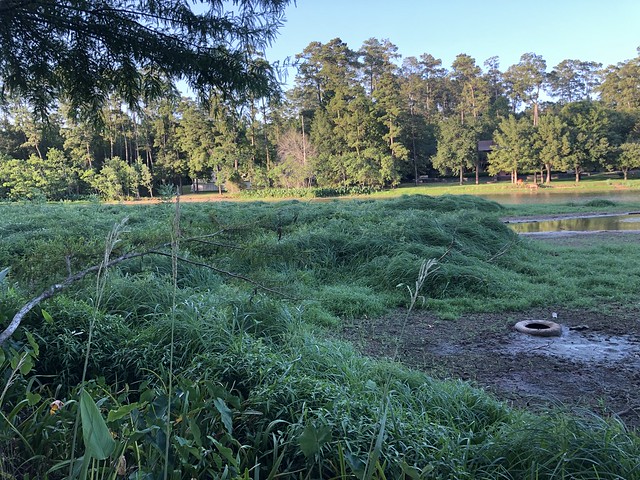 One view of the downed Hurricane Harvey tree area. Yes, we need to get that tire out. 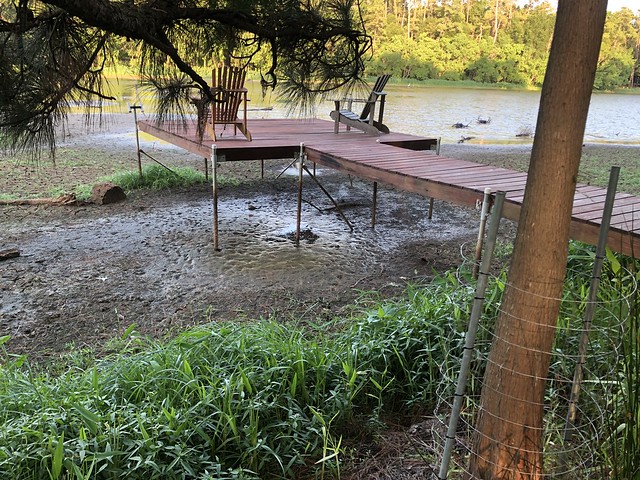 And the dock! Another couple of months and mud will be hard and Chris can repair a couple of boards more easily. I’m guessing this will be our wetland dock instead of pond dock now…we shall see how the precipitation goes. 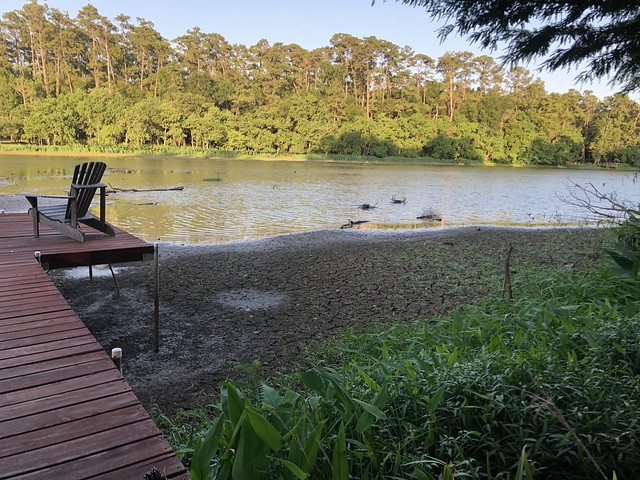 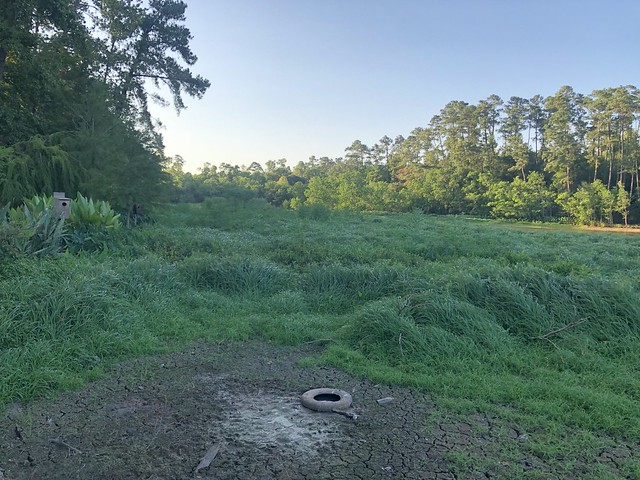 Another view back at the downed trees. Again, this used to all be open water. 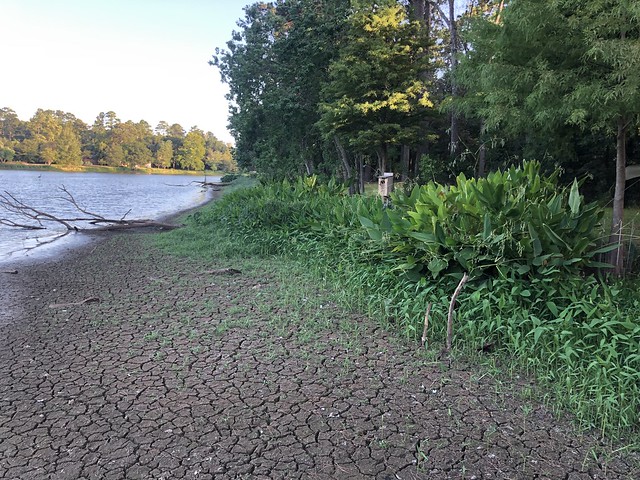 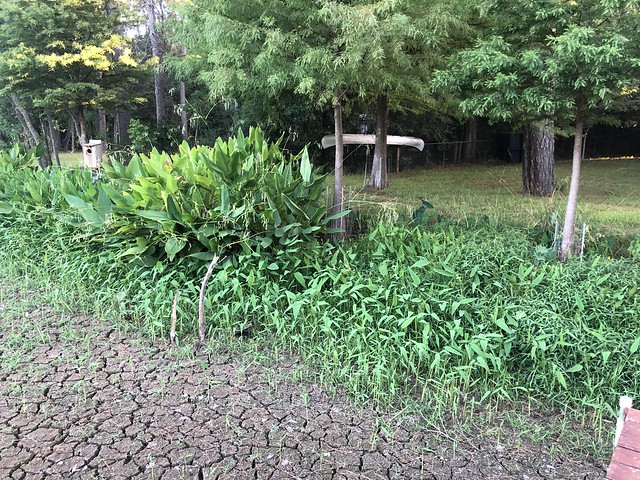 We planted alligator flag, Thalia geniculata, which is that main clump along the shoreline, and it has done even better with spreading since the water lowered. It was kept somewhat in check with higher waters. 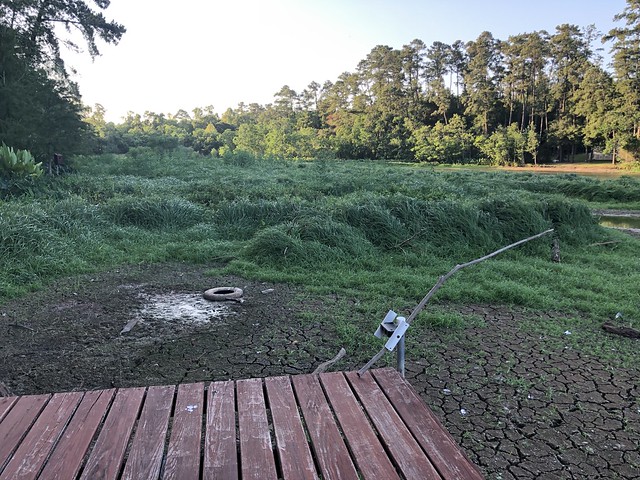 I suspect we’re in for this same pattern through October at least, which means this will all get worse. At some point when we have time we’ll try to do some triage out here but it is a lot for just us to take on and I don’t know how water patterns will change once rains return. I hope it will be more pond-like in this area again but I really don’t know. If anyone has resources on grants for dredging and pond maintenance to use on private lakes/ponds, let me know!

You can see Forest’s forlorn stick he used to use to play in the water on the dock—it will be a long while before he gets to do that again.