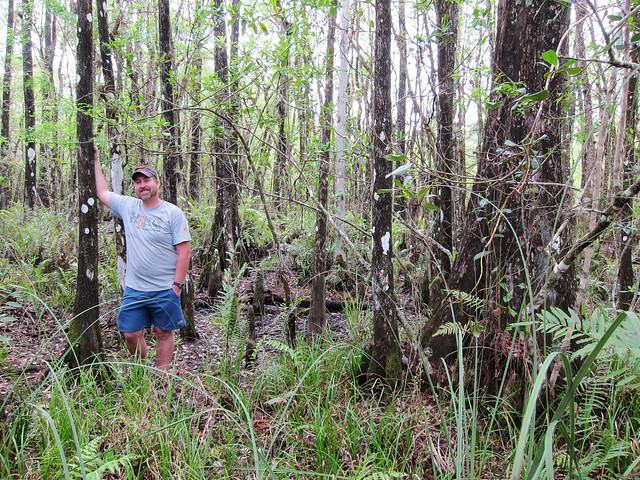 I took this photo of Chris when we were in Florida three weeks ago. It is at the location where he was chased out of the swamp by a Florida black bear. Yes…you read that right!

Back when we lived in Florida, Chris was out exploring an area in the swamps in search of ghost orchids and also to see what might be out in that area. Many of these sections in the wildlands of Florida are very little explored, particulary the wet cypress domes and sloughs. As he was approaching what he now calls ‘Bear Slough’, walking through dense vegetation and only seeing tall ferns and brush up ahead of him, he heard rustling noises very nearby. Perhaps 150 yards ahead he heard splashing and thrashing in the water. His first thought was that he had scared an alligator, which is something to be cautious of in itself. Then a few seconds later he saw something running through the vegetation but couldn’t tell what it was. Soon he realized it was a bear, running full speed towards him! After the recognition of what it was, he finally began yelling at the bear by the time it was approximately 10 feet from where he was standing. As he tells it, the bear was not afraid of him but Chris was very afraid for himself. Up until that time and until very recently, there had been no documented cases of a bear attacking a human in Florida. (This appears to have changed in December, but was in a populated location, not the wilderness.)

After the bear had stopped charging him, Chris noticed the hair on the bear was bristled like a cat when it is spooked or mad. Not only that, the bear was bouncing up and down on its front paws and growling. He believes it lasted about 10 seconds, but of course it seemed like longer. When it stopped bouncing it sat there staring at him angrily. Chris backed away slowly and then turned around and walked back through the brush the way he had came. Completely spooked, he continued turning around to verify the bear was not following him! Thankfully, it wasn’t.

He ended up going back out there the very next day and found alligator flag that had been pulled up that the bear had been eating on the roots. There was no bear in sight, but all of that scare ended up being worth it as Chris discovered a population of narrow strap-leaf fern. The plant had been thought to be extirpated from Big Cypress National Preserve and his finding put it back on the books for being in the Preserve.

So, we went back to the location of the encounter as Chris had no photographs of the site of the encounter. I had actually never been to that slough so it was a new adventure for me. I’m just glad the event turned out to be nothing, but it definitely reminds one to keep their eyes open when out in the woods!