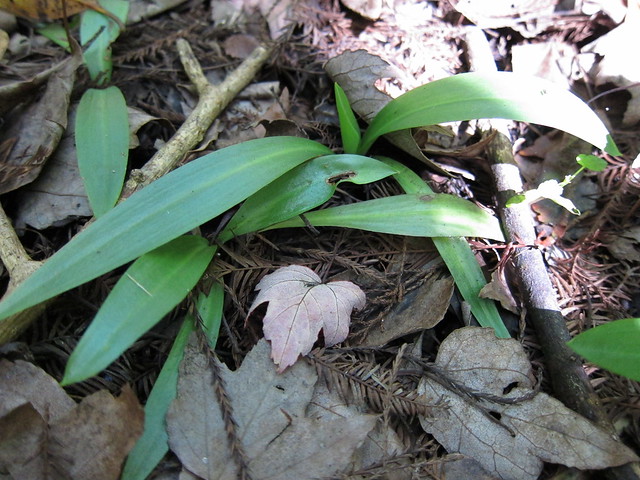 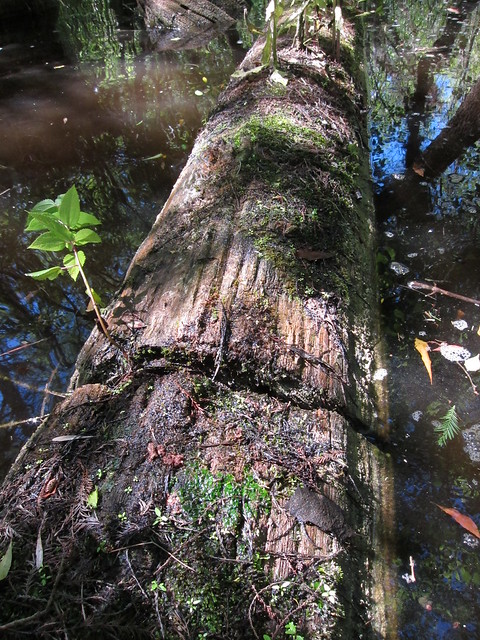 Old logging scars…what a shame, they cut the tree down but couldn’t haul it out. 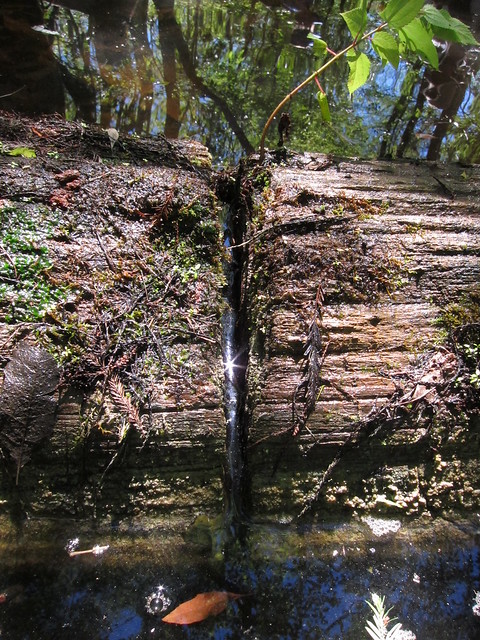 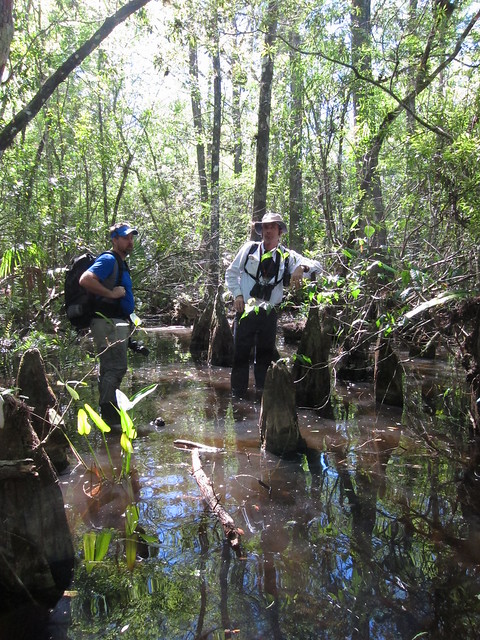 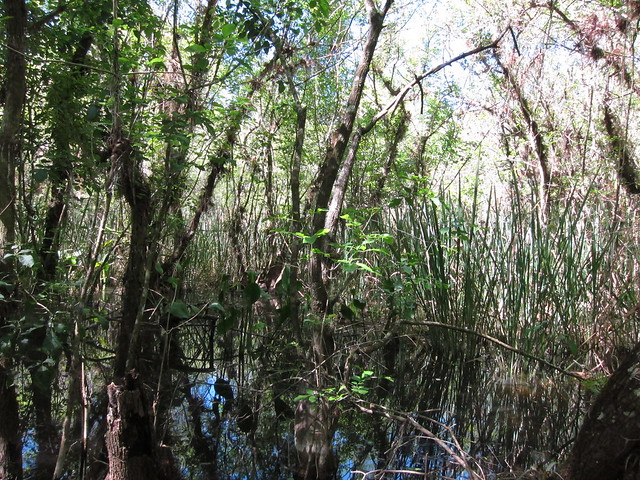 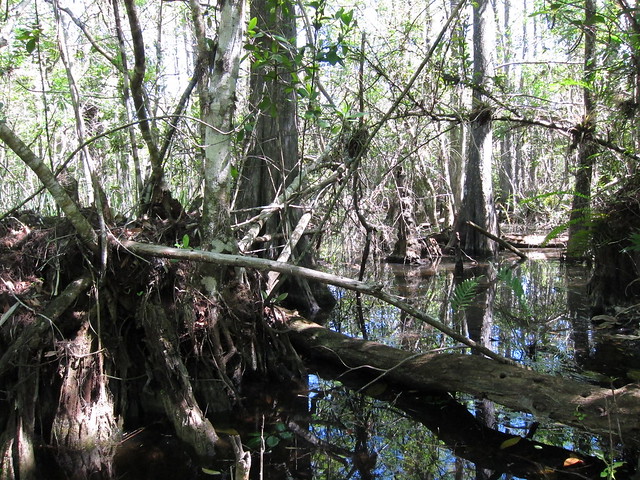 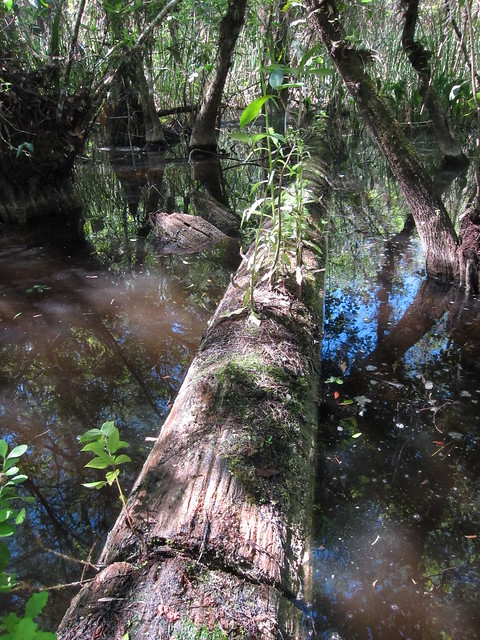 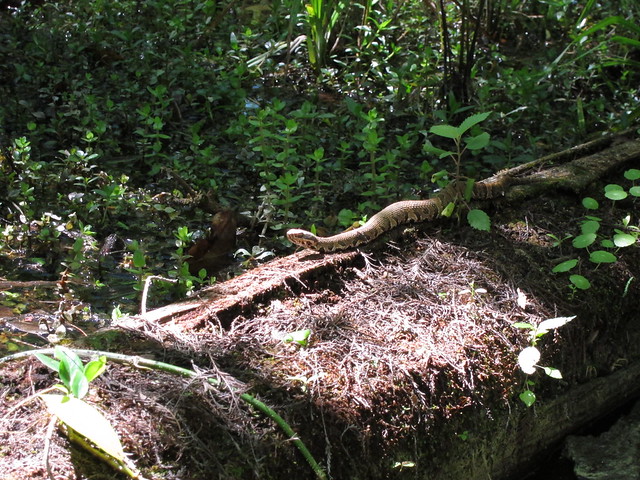 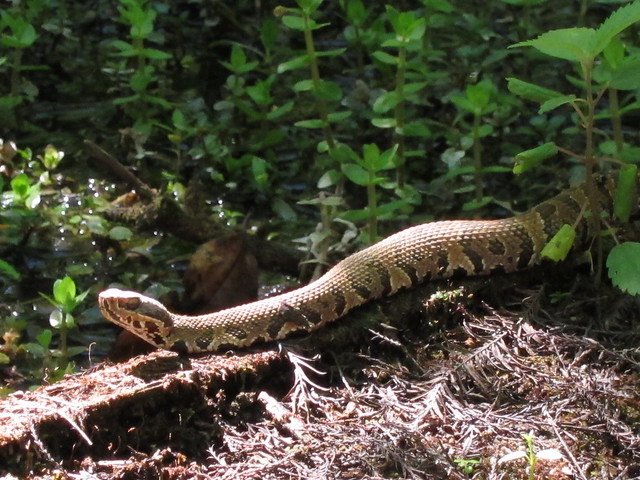 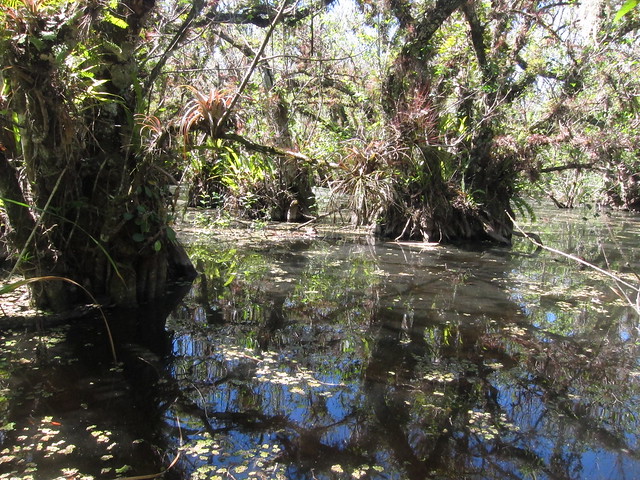 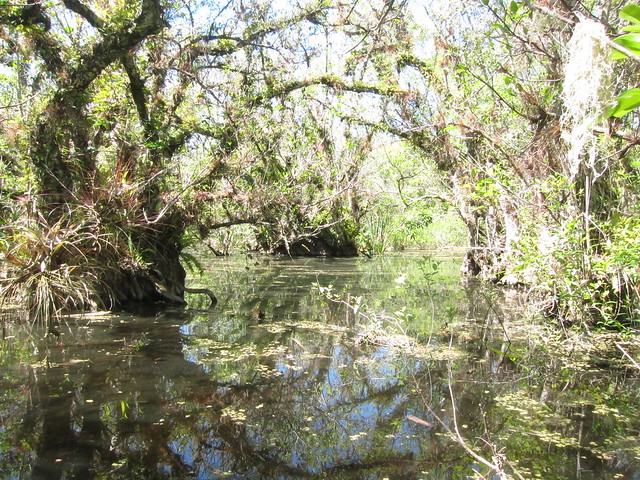 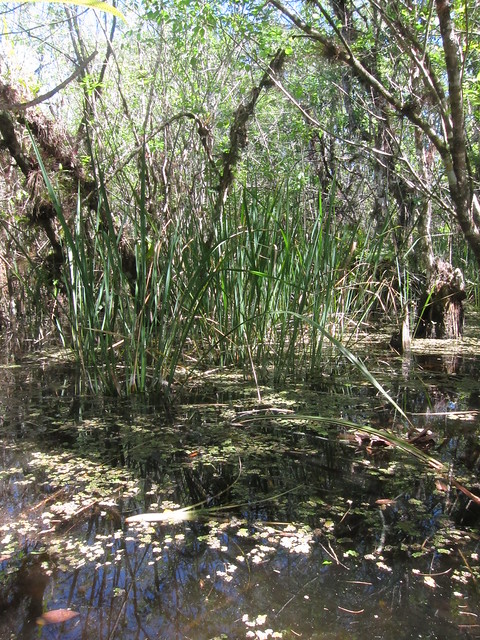 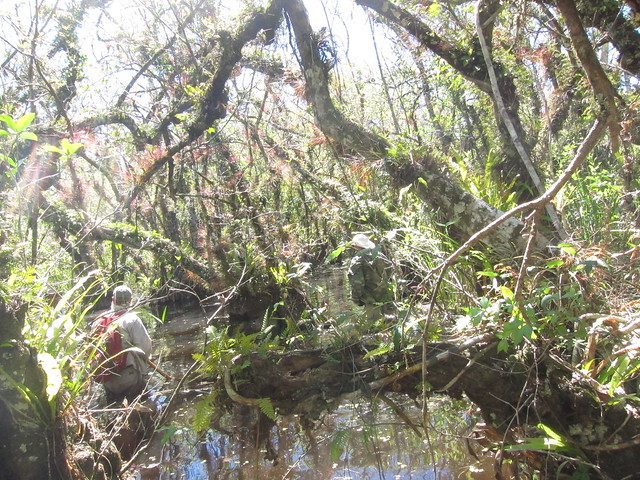 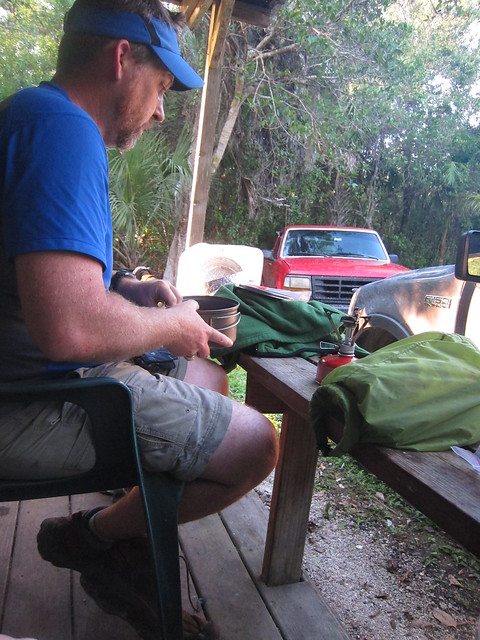 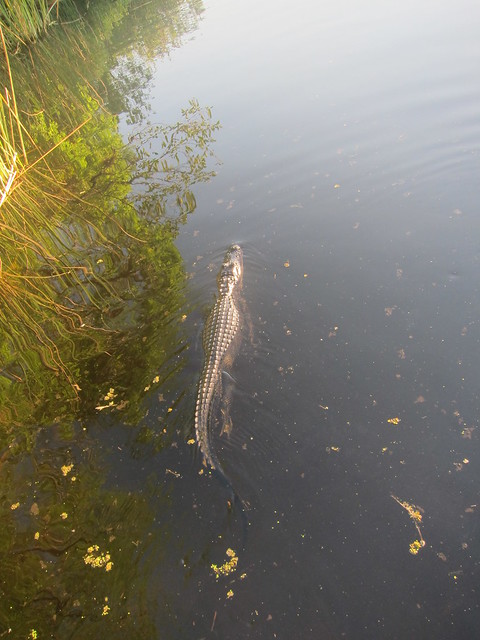 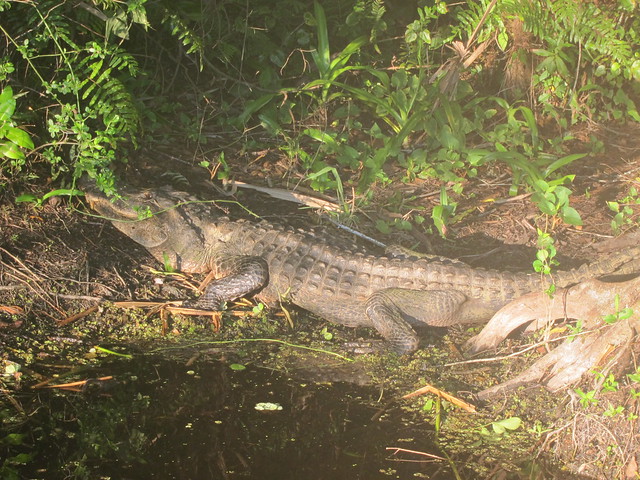 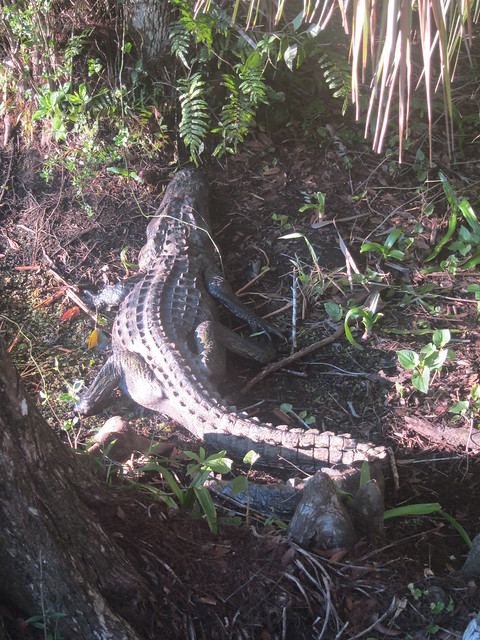 On our second day of swamp walking in Fakahatchee Strand we went to a completely different section of the central slough, coming in from Janes Scenic Drive, the main dirt road that winds up through the park. This would be a bushwhacking adventure instead of the easy walk like the previous day. We also did not end up hiking with Mike this day as he had a group of other volunteers and was leaving from a little bit further down the road than we were. Theorhetically our destinations were the same, a large and deep pond about a mile north of the road, but in the end it was only our group that ended up getting up to that pond.

First off we walked through brush and vegetation that wasn’t too terrible, reaching the first pond and circumnavigating it quickly. Not finding anything out of the ordinary we moved on maybe a hundred yards to the east-northeast to another pond. It was there we found a few orchids and the interesting scars on the downed tree that had been nearly hauled out of the swamp half a century or more ago. After visiting this pond it was then that we found thicker brush and spent a good deal of time bushwhacking to get up to the largest pond about a half a mile north. A half mile doesn’t sound horrible, but when you aren’t necessarily walking in a straight line and have to slow down for briars and vines, well, it can take a lot longer than one might imagine.

The large pond was fantastic and worth the work to get to it. It seemed to go on and on and I know that I didn’t see the breadth of the area. Chris had an encounter with an alligator on one side of the pond, but I attempted to stay no deeper than my knees, though on occassion I ended up thigh deep due to necessity. Being out there in the swamp, a mile from the road, it is a unique feeling. A mile from a road in any typical wilderness doesn’t sound very far, but in Fakahatchee it is a place that very few people ever get to see.

Our hike out didn’t take the same path and Chris and I separated from the others we’d hiked in with. Using our GPS we hiked generally in a south direction, only changing a couple of times to head east in an attempt to find a tram to parallel. The trams are generally overgrown and unpassable, though sometimes you can walk in the ditches that are directly adjacent to them. We had a short scare while crossing over one of the trams when a branch flipped back into Chris’ eye. He had me look in his eye but I saw nothing, thinking maybe he scratched it instead. He doused water in his eye and managed to get a small piece of a twig out! That had to have been quite painful!

Moving onward we began really bushwhacking our way out, moving slowly as we ducked under tree limbs, climbed over tree limbs, and attempted to avoid the poison ivy and Smilax vines, mostly to no avail. Eventually we found our way out to Janes Scenic Drive much farther east than we’d entered the swamp. To our west we saw a group of people, thinking it was the guys we’d hiked in with. Instead it was Mike and the crew he’d gone into the swamp! We’d really hiked further east than we’d intended!

We stood around and chatted with the folks we hadn’t met before and Chris caught up with a few people he knew from previous years of swamp hiking. Eventually we made it back to the truck we’d came to the swamp in and then headed back to the cabin we were all staying in or camping at. The last few photos are from the cabin. The cabin owners graciously let the park use the cabin a few times a year for various events. The park has several areas of inholdings and the cabin is one of them. It’s about two miles down a tram from Janes Scenic road and is probably one of the more popular hiking/biking trams there is in the park. A plethora of alligators hang out in the pond behind the cabin.

Chris went out again the next morning but I was done swamping so I opted do some other exploring closer to the cabin and up on Janes Scenic Drive instead. More on that in another post…