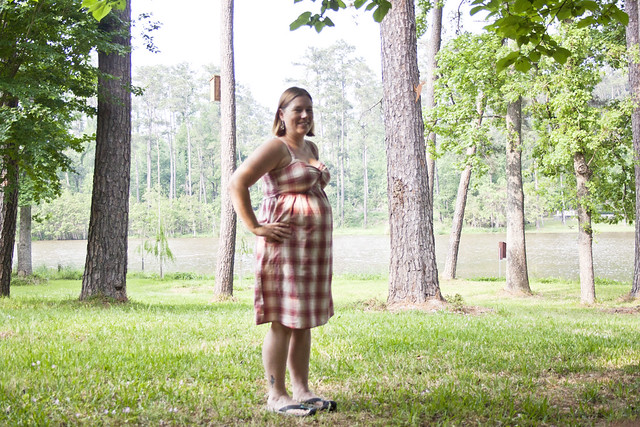 I was going to wait to write a pregnancy post until a week from now after my 23 week appointment, but I’ve got thoughts so I decided I’d write them down now instead. I think this dress came from my friend Erika, but I’m not sure. I’ve been lucky to have obtained maternity clothes from three different people which has allowed me to minimize my clothing purchases while pregnant. Normally I am not really into dresses. Skirts yes, but dresses typically make me very self conscious about my flabby middle. Since the middle isn’t so much flabby as carrying a child at the moment, it seemed like an option to try. Overall it was comfortable but half the time I wondered if I looked like I was wearing a muumuu.

Also, I have no real concept of how big I am. Other than my belly feeling generally tight and uncomfortable at times, I have no perception of how much it sticks out until I see a photo of myself. I still try to squeeze into places that I quickly realize I can’t fit through anymore, such as pulling a chair out further than I normally would have, or opening car doors when the space is tight because the car next to us is parked so close. It doesn’t register until I’m trying to do these things that I need more room than I thought. I’m sure this is all going to continue to get worse as time marches closer to September.

So far the most annoying things going on right now is indigestion and the inability to sleep comfortably. The frustrating thing is that I can sleep fairly well on my back but everything I keep seeing says not to sleep on your back as it decreases blood flow to you and to the baby, or at least that’s what the theory is and research is sketchy and minimal. Sleeping on the left side is what I see recommended but there’s only so long I can sleep on my left side. And then there’s the few nights last week when I ended up with restless legs. I’ve had it on occasion over the years and I’m hoping it only makes its appearance this one time and doesn’t return because I’m not interested in dealing with that, too. Another thing is when I wake up in the mornings I often feel as I did ab work all night because my belly feels quite sore. It goes away a few minutes after I am up and walking. As far as the indigestion, Tums is my friend for the moment. Sometimes I think a certain food isn’t going to bother me the way foods like spaghetti sauce and Mexican will, but of course just when I’m laying down in the evening here comes the heartburn. Thank you progesterone.

As for the Bradley Method classes, we’ve had three classes so far and I’ve really liked them. The first sessions go over some of the basics of pregnancy and I think were more beneficial to Chris than me since I’d done a lot of reading prior to the class. I think as we get further along in the classes we’ll both definitely benefit. It seems most people don’t really know what the Bradley Method is because everyone asks if it is like Lamaze, which it is not. While there is a focus on relaxed breathing, there’s definitely no rhythmic breathing like Lamaze which is discouraged due to its ability to hyperventiliate.

The Bradley Method focuses on several main aspects: the inclusion of a partner to act as a coach/spokesperson for the mother, relaxation techniques during the first and second stages of labor, focusing on a high quality diet that relies on a 80-100 grams of protein intake, and exercises to practice prior to birth that can be used during birth but also to build stamina for the hours of labor. Also within all of this it relies heavily on that balancing of options that are available to the mother during labor, particularly all of the interventions that take place during pregnancy and during labor. It is focused on researching your options before hand, knowing how to take the information as it comes to you during labor, and making educated decisions on any interventions that may or may not be needed.

I definitely feel more confident and assured in my decision for a natural childbirth at this point in the game. I peruse some pregnancy forums sometimes and I see women posting in their third trimester saying they decided to opt for a natural childbirth and all I can think is that the liklihood for them to have a natural childbirth at that point is probably on the low side. Not that it couldn’t happen, but I feel that the earlier one decides to go for a natural birth, the better. There’s more time for studying and researching all of the options, for the mental preparation of it all, and to talk it over with those who will be involved in the birth. Moreover, the earlier you pick a doctor or midwife who is pro-natural birth, the better. If you are waiting until mid to late pregnancy to decide for a natural birth there’s a good chance the doctor you are with isn’t going to be as open minded as you are hoping for.

I also feel confident in Chris, too. In the few weeks after I discovered I was pregnant I remember talking to him about potential birth plans and one of his reactions was something along the lines of “You aren’t going to want a hippy, weird birth, are you?”. Which, I was. Ok, so I wasn’t wanting a home birth, but I wasn’t wanting the Standard American Birth that everyone is accustomed to. It took some time and that’s when I realized that the Bradley Method would be what would work best for us. It kept Chris involved, allowing him to learn alongside me. He’s not a big book reader but will do research online for all sorts of things to teach himself, but I definitely knew that a class would be more beneficial than to strictly research online and for a book to languish somewhere unread.

And that’s really where we are at the moment. Teddy is more active every day, though he has his lazy days. Sometimes I tell him to move around so I know he’s in there, and of course he doesn’t behave and waits all day until I’m laying in bed to start moving around.