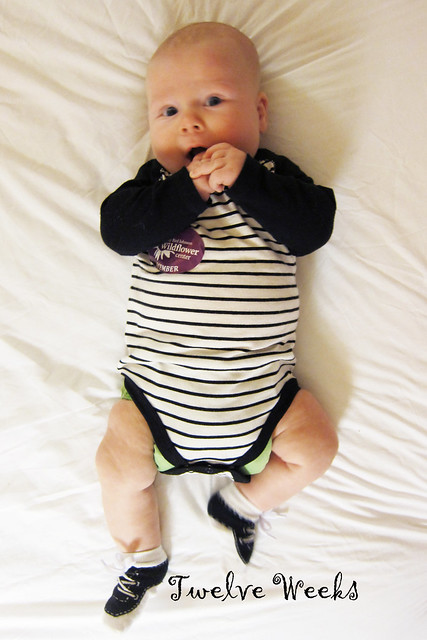 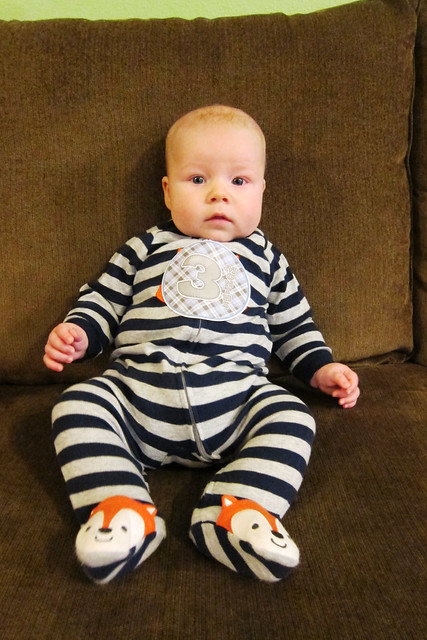 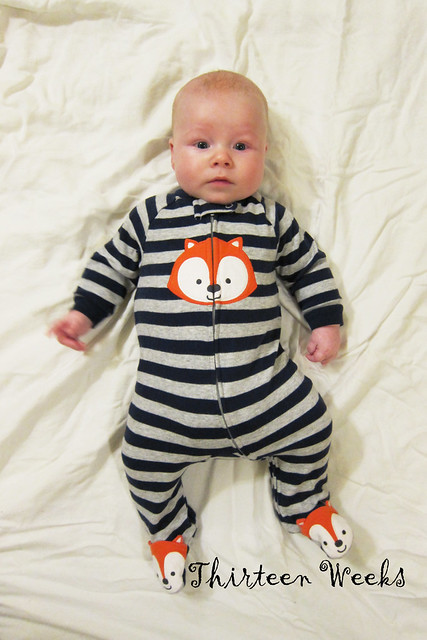 There have been lots of changes in the last two weeks, he’s really shed that newborn baby phase and taken hold into the just-a-baby phase. Every day a new little light flickers in this brain, activating some other process that had previously been quiet but is now actively engaged. Like grasping, that’s taking off a lot! I only use blankets on Forest when he’s napping on the Boppy or in the Mamaroo, places we keep an eye on him but he’s now figured out how to grab the edge of the blanket and pull up on it. So that means watching him like a hawk even more so until he develops this grabbing skill better and knows how to pull it off his face after he pulls it on his face. I’d been working with him on the grasping thing here and there but he’s really taken to it himself in the last week.

He’s also starting to entertain himself more while on the playmat. This is now giving me the opportunity do some chores and not feel guilty that he’s just lounging in the Mamaroo, instead he’s playing and learning. The Mamaroo is also starting to become less interesting for him and he really only likes to sit in it during the morning when he’s still sleepy or we’ll stick in him in when we need to use the restroom. During mealtimes he’s increasingly wanting to be with us at the table which is unfortunate since the dude can’t sit up yet, therefore a high-chair isn’t quite on the agenda yet. Sometimes I put him in my lap, holding him with one hand and finishing a meal with the other. He likes to be involved! More recently I’ve pulled the playmat up to the table with us during dinner and he’ll hang out there while we eat. He’s starting scooting a bit and managed to move himself down to put his head under the dangling toys which allows him to grasp it better. He tried to lick one of the lower dangling toys the other day! Yeah, he’s becoming mobile!

The talking/babbling has gotten a lot more frequent now and we have little conversations quite often now. When my niece was little I swore she knew words at a young age and I swear Forest is doing the same thing. I know, he doesn’t actually know the meanings of the words but I truly believe he’s working to mimic the sounds. I’ve started incorporating a few sign language words in with my talking on occasion in an effort to do some signing when he’s older and for him to be able to sign back, before his talking begins. I had gone back and forth about using baby sign language, worried that it would prohibit language development, but from what I’ve read this isn’t the case and can help language development. If anything, I’d like him to know a few important words so when we’re in an in between stage of language later this year he will be able to communicate his needs.

He’s definitely interested in being engaged with more these days and I feel that our evenings during the week needed to be screentime free (no computer, no iPhone) while he’s awake unless we need to make some separate time for ourselves to get something done or take separate breaks for some personal time. Even prior to having Forest we noticed how much people focused on their phone or device out in public but I’ve been increasingly reading about distracted parenting. Of course I would love time to surf the internet like I used to in the evenings but these early years are vitally important in building his personality and the bond we’ll have with him. As we get into more of a routine as he gets older it’ll be easier to divide up time since he will have a set bed time, but for now I feel it’s more important to devote evenings to him while he’s awake, in my opinion.

As for his side of technological interest, Forest is definitely aware of the television. Sometimes he gets so distracted during a feeding that I have to turn it off so he can focus on feeding. Sometimes I like it better that way anyway, getting to hang out and talk to him while he’s eating, but then again if I get to talking too much he gets all distracted by that as well. He’s in a phase where everything is interesting at the moment! We have let him watch a few things on You Tube (Baby Einstein) and on Chris’ iPhone in order to get him to switch his focus from hating his car seat during the car ride to Austin over Thanksgiving weekend. He’s definitely into it all and I can see where those early technology addictions start! It’s going to be all about balancing out the right amount and use of screen time as he gets older.

He also started his first week of daycare during the start of week 13. It was a little worrisome at first, and I’m still not 100% comfortable with it (wish I could afford a nanny or to stay home myself, and I’m already thinking about his learning over the next few years), but he’s adapting well—finally took a two hour nap on Friday whereas the rest of the week they were teeny, tiny nap periods throughout the day. With 8 babies in the room I can imagine it gets loud and crazy in there. His caregivers are nice and have so far been happy to use the cloth diapers. We tried to make it as easy as possible for them so they wouldn’t have any problems with it. I guess one thing that really stunned me was being told, reassuringly, that they checked diapers hourly. Um….what? I guess I didn’t realize that checking hourly was a good thing. For one, cloth or disposable, my kid likes his diaper changed just about immediately unless he’s sleeping. He’s been like that since he was born. He’s started easing up on his fussing about it so I just check him if it’s been 15-30 minutes since I’ve last checked him at home and the majority of the time he’s usually peed. I tried to let them know that he really isn’t fond of a dirty diaper and his main reason for fussing will be for a dirty diaper, and I think they are starting to get that but I know he doesn’t always get his diaper changed more than once an hour. Since this shocked me I went and Googled about it and apparently other daycares do it every two hours (WTH??) and I ran into a lot of forums that had parents saying they let their babies go 2+ hours between changes. Yeah, maybe if they were a toddler and could hold their bladder/bowels better, but letting young one sit in it that long during waking hours? I don’t care how absorbent disposables are, that’s just gross.

He’s still growing like a weed, I swear he gets longer by the day. I think his hair might be starting to thicken up a bit. Oh, since he started daycare we’re now entering the germy phase of our life. It’s time to start beefing up the immune system! His first day at daycare they sat him in a bouncer seat right when we got there *right* next to a baby who had a cold. By Thursday Forest was sick and by Friday so was I. Yippiee. And to make it worse I have to watch what I take since even some herbal stuff can reduce my milk supply and some OTC isn’t safe for breastfeeding. And forget anything for him, most things aren’t good to give babies until they are at least a year old if not two years old. All I can say is “breastmilk do your thing” and get those antibodies into his system!

(By the time I’m getting those post up we’re only two days away from 14 weeks and staying home from work and daycare due to this crummy cold. Both of us are feeling like crapola. I’m trying to get those post out before he wakes up…but he’s stirring!!!) 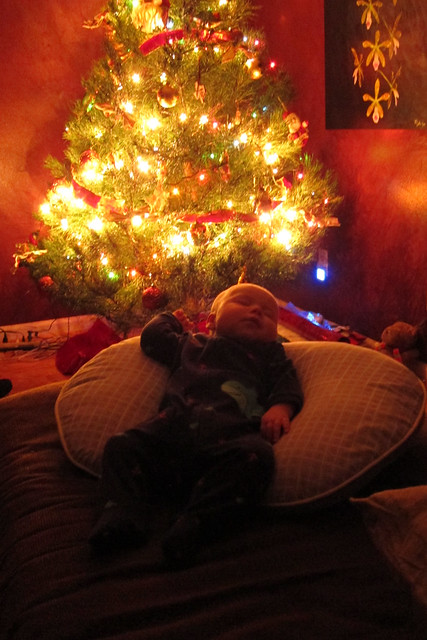 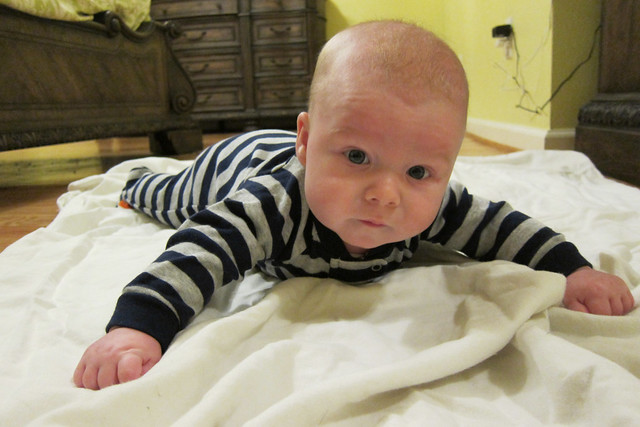 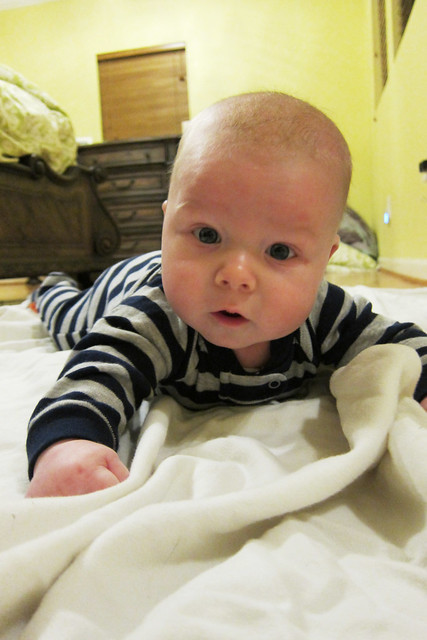 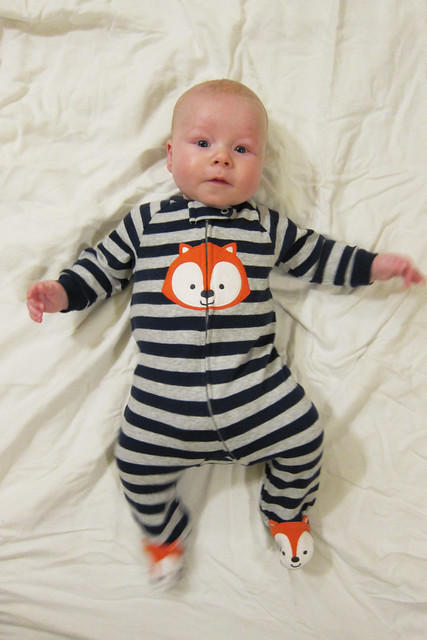 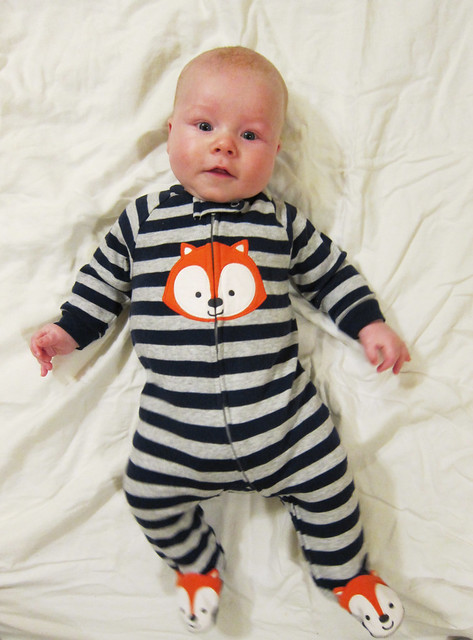 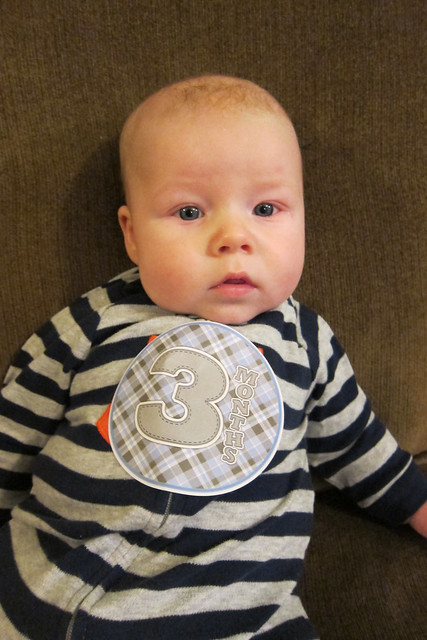 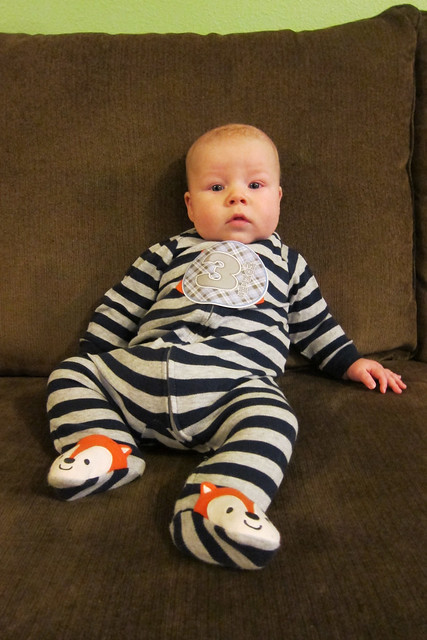 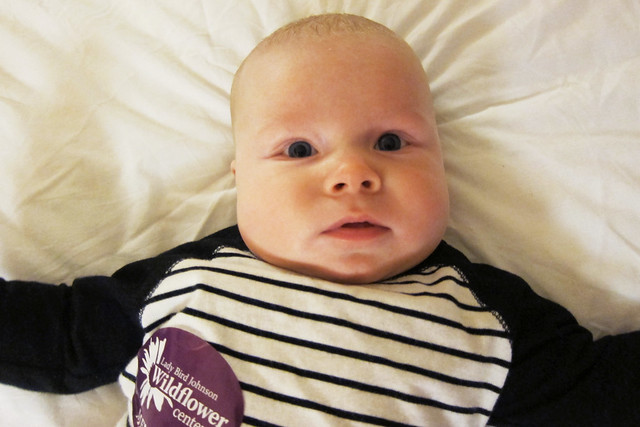 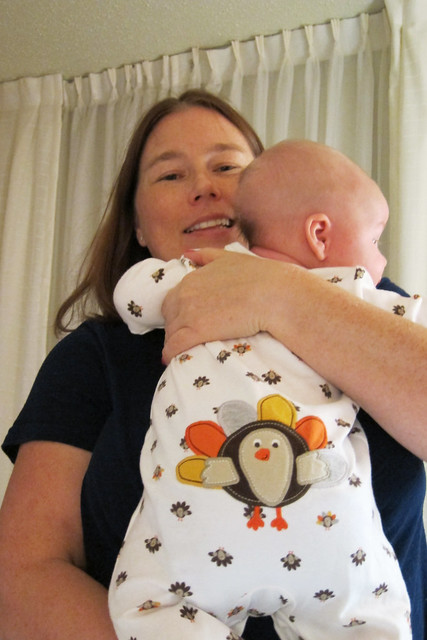 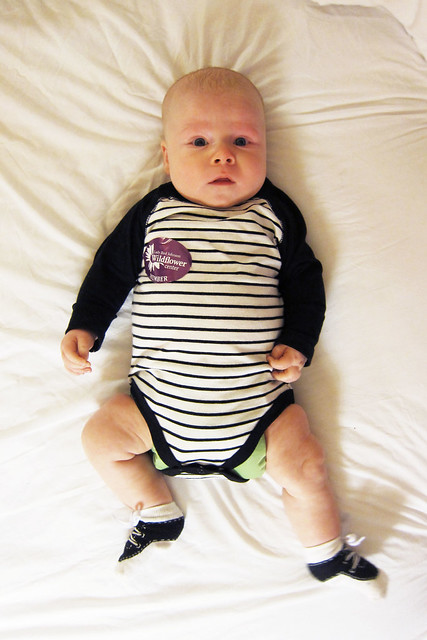 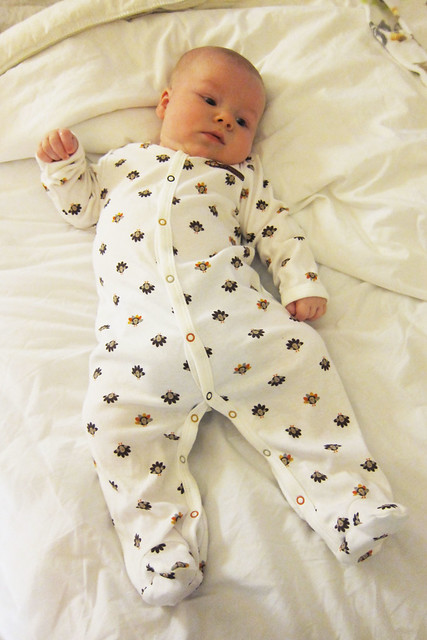 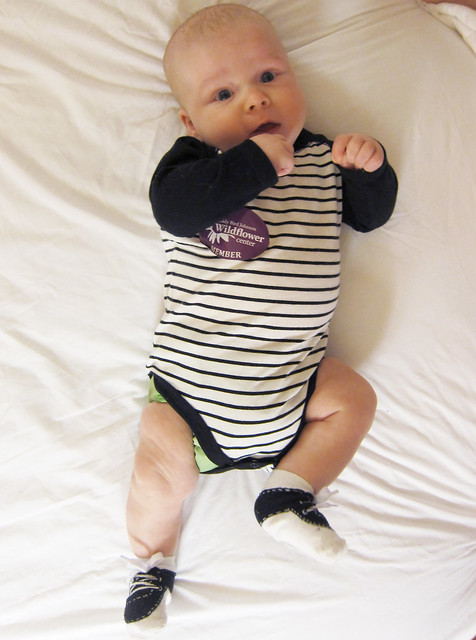