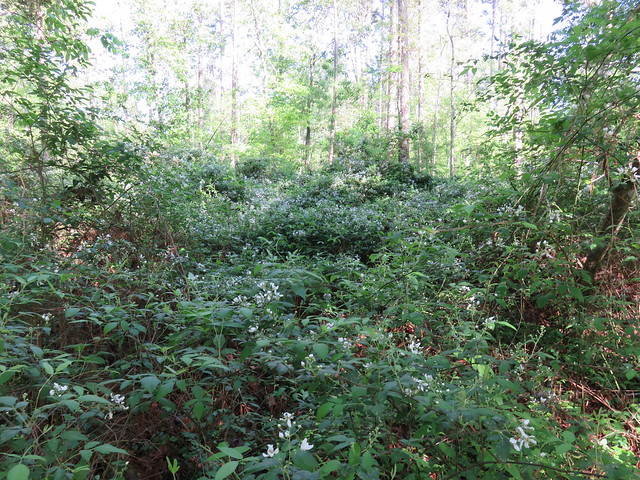 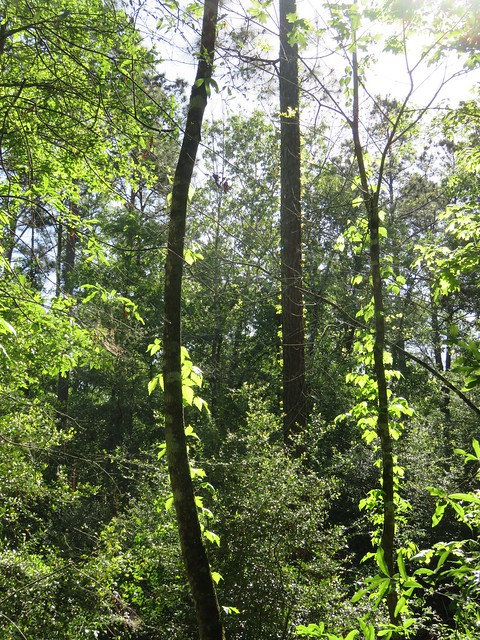 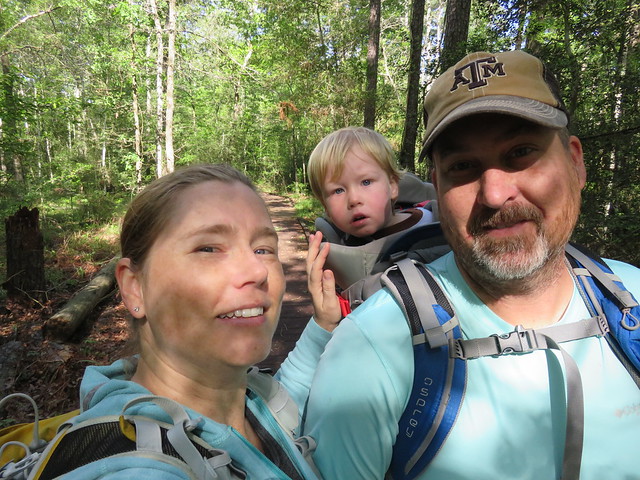 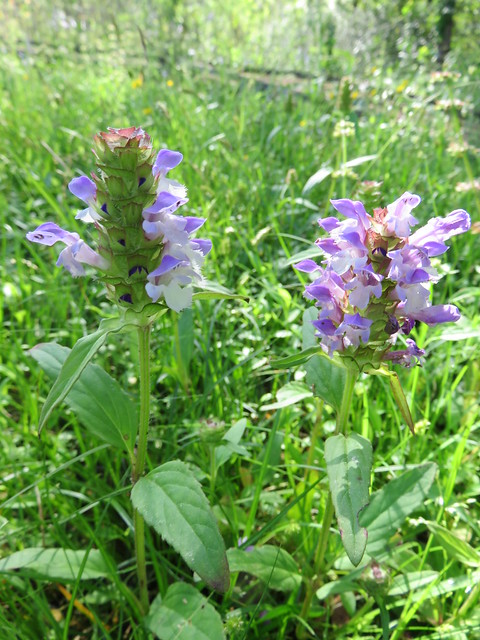 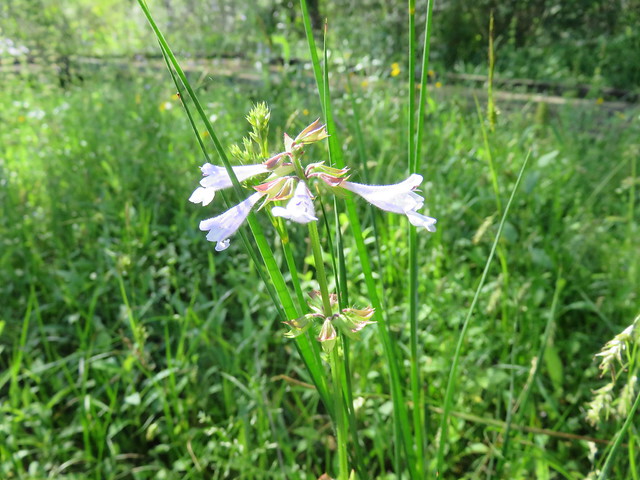 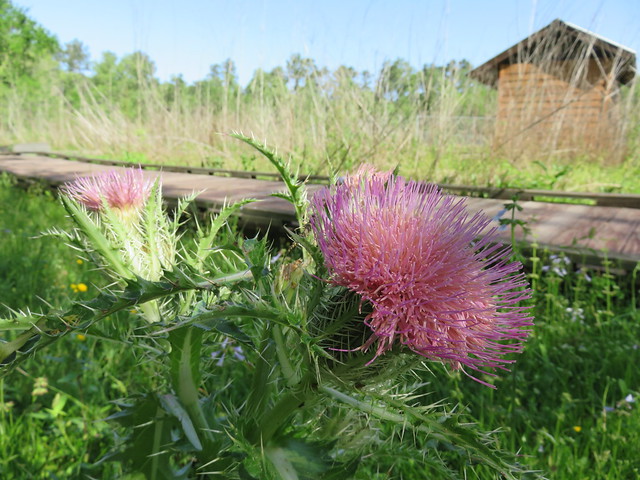 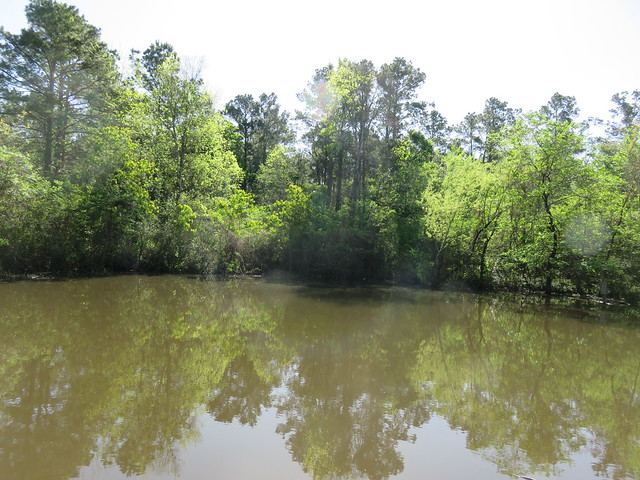 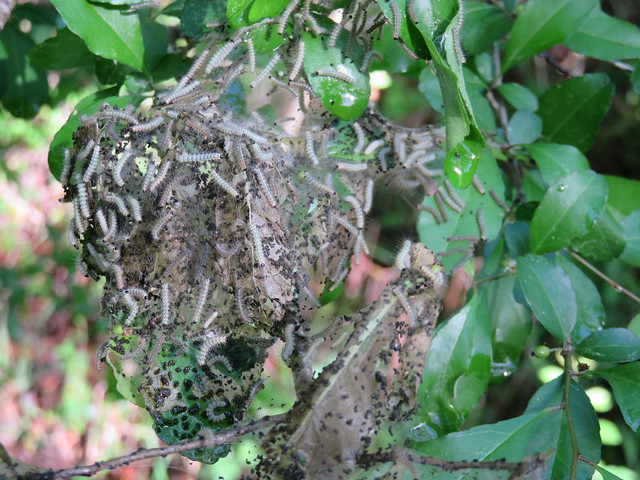 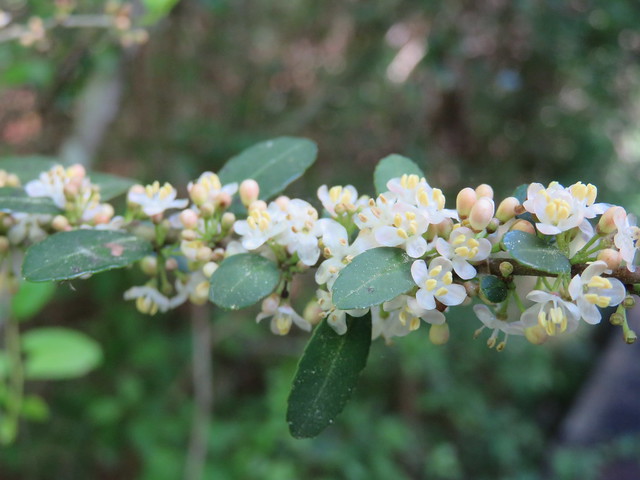 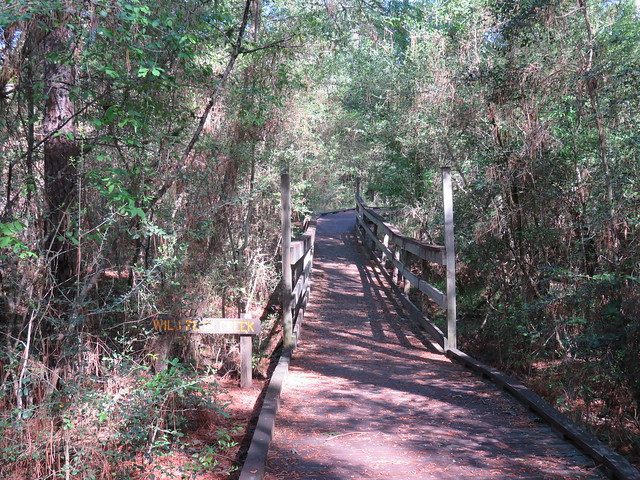 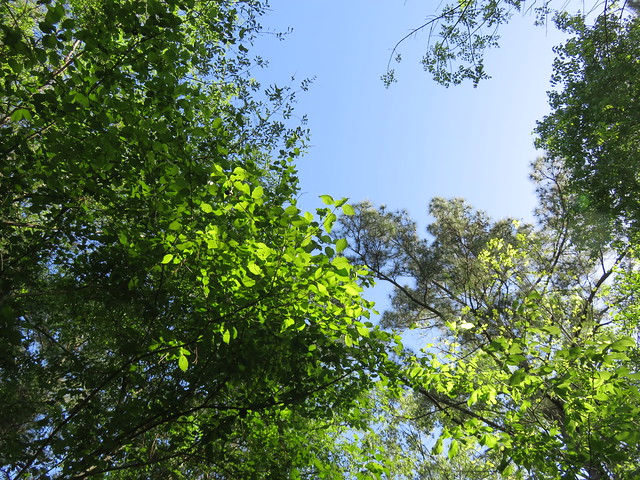 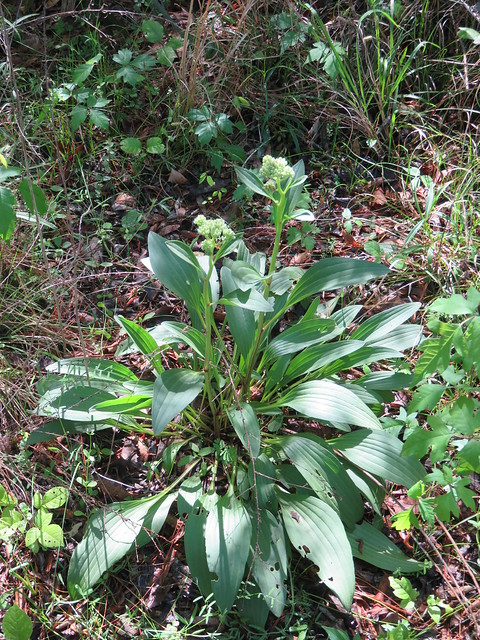 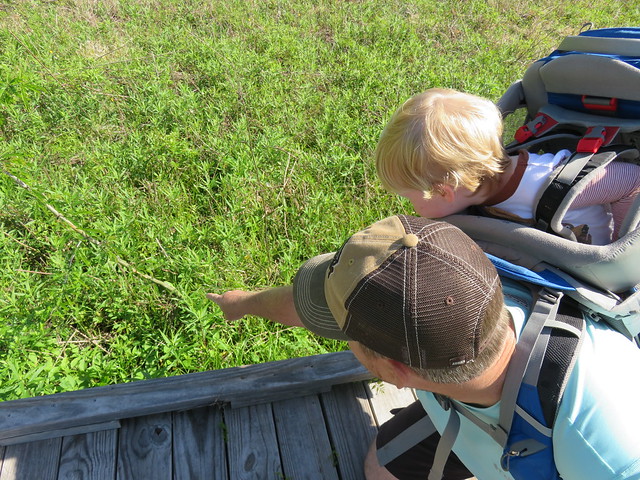 Looking at a lizard. 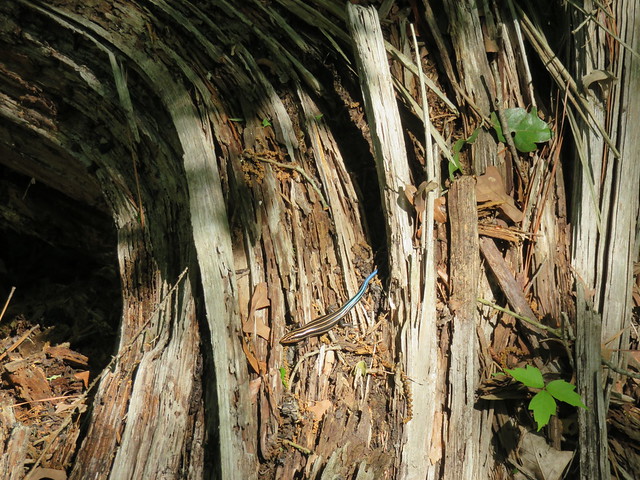 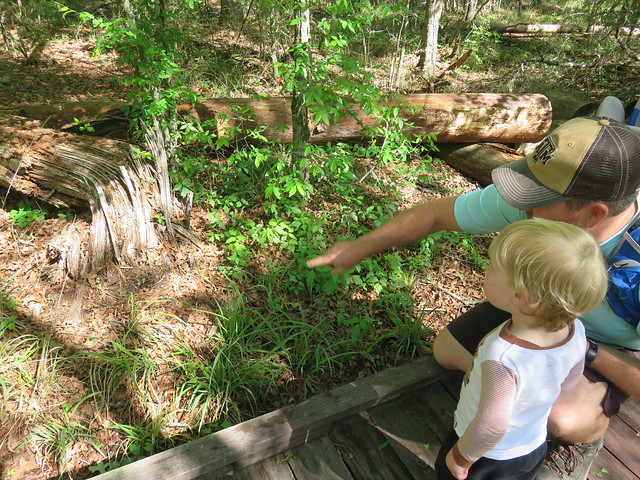 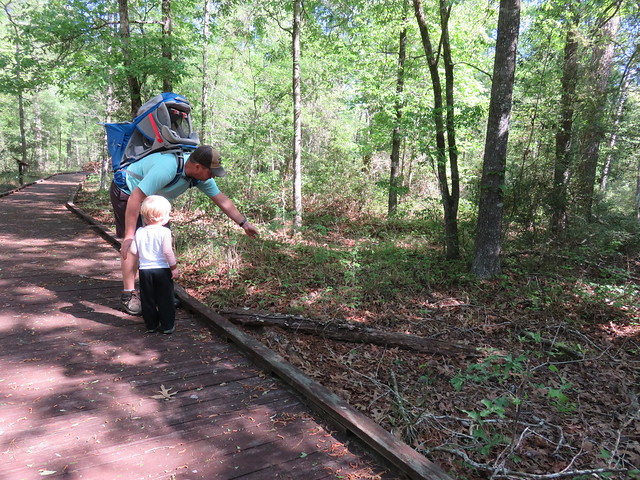 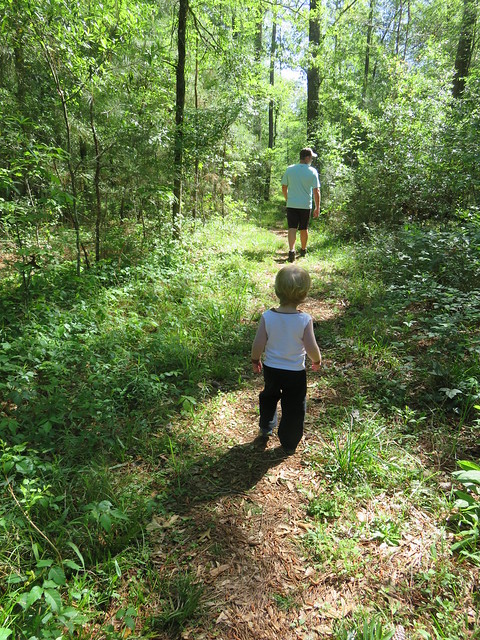 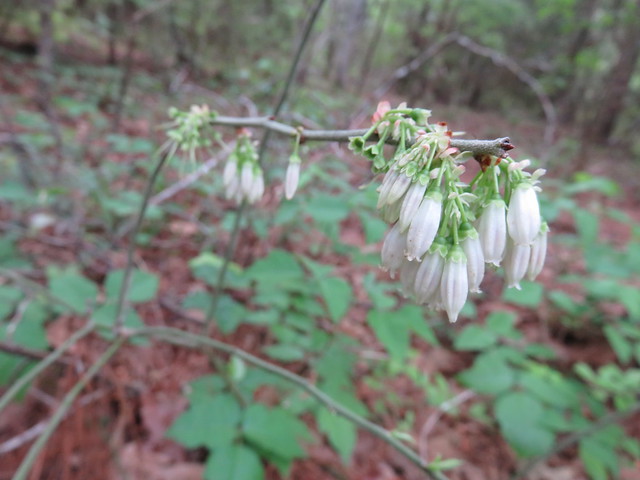 A Vaccinium in bloom. 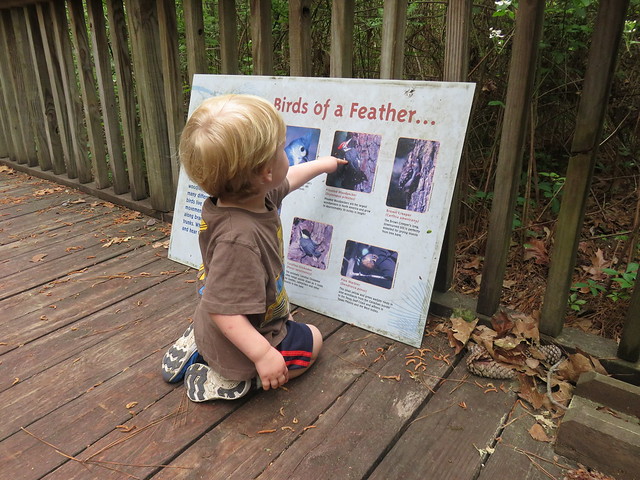 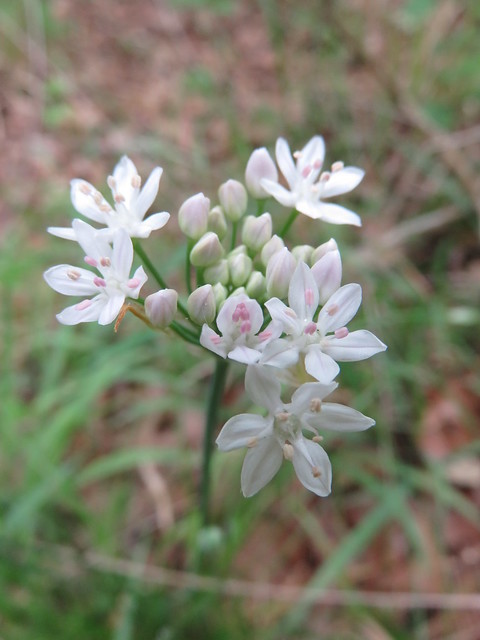 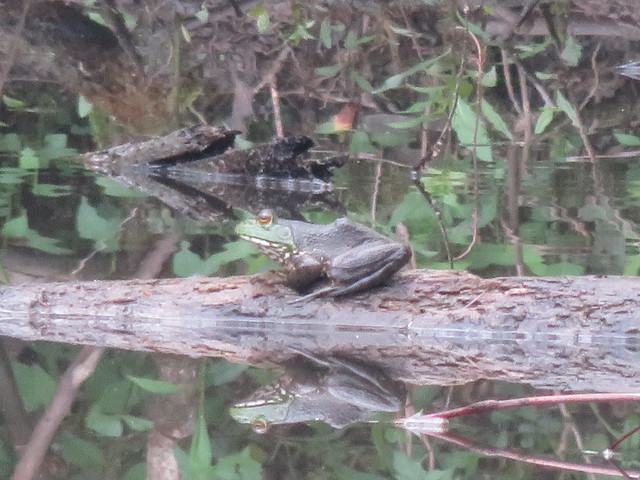 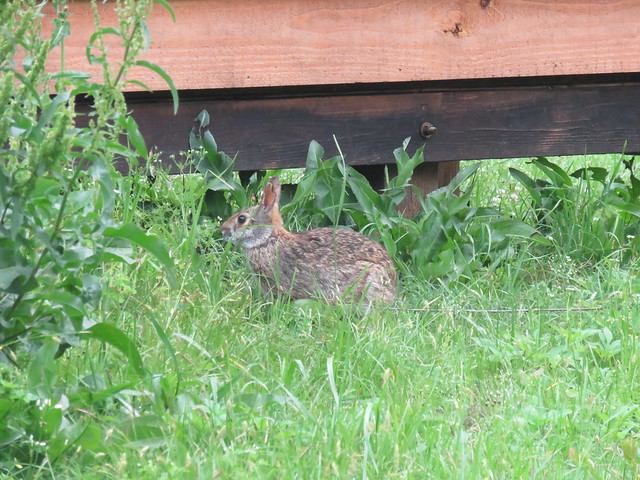 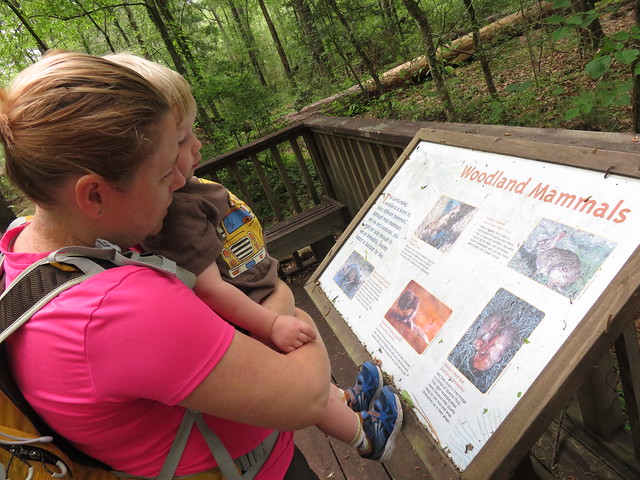 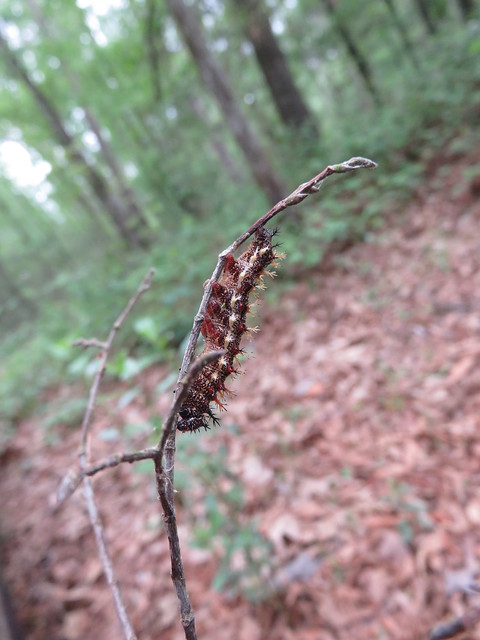 The Pineywoods Nature Trail turned out to be a fascinating trail for us to hike and one that was perfectly suited for Forest to explore on foot. We went through the loop twice over the weekend we were camping and each time saw new things. Forest really enjoyed being able to explore on his own and funnily enough he remembered some key points about where we’d visited on the first round, such as where exactly we had found a green anole on the first trip. Turned out, the green anole was still in the same place he was on that first trip and he and Chris had a bunch of fun oogling at the lizard.

If following the boardwalk in a counterclockwise direction, it leads to the bird blind and pond first. Chris spotted a bullfrog on the far end of the pond on one of the visits and Forest and I spotted a rabbit near the bird blind. I’m stuck figuring out if it is a swamp rabbit or eastern cottontail—anyone want to tell me? One of the interpretive signs had a display for swamp rabbit which is what I’m leaning towards here but I’m really unsure because of the angle of the photo.

There were plenty of caterpillars, too, though we saw a few other species that we weren’t seeing at our campsite. They weren’t dropping nearly as plentifully as they were at the campsite, either, but near the Frog Pond area the railing and picnic table was covered in them. Forest enjoyed watching them from a distance and really, this trail is what I believe eased his fears on the caterpillars. He was able to experience them as an exploration instead of an infestation and I think he came to appreciate them a little bit more.

What I enjoyed about this trail was that we really took it easy, stopping to look at the different plants or insects, enjoying the changing habitat. While it was mostly a forested and mesic area, there was an open area on the north end of the loop with grasses and full-sun plants to enjoy.

I realized later that we didn’t really hike a whole lot on this trip. Sure, we did this loop twice, popped over to a short 1/3 mile loop near the park entrance, and then the short section of the Trinity Trace trail, but we didn’t hike the other trails. Chris spent a lot of time fishing and Forest and I just meandered around the campsite and around the area Chris was fishing. It was a pleasant change from the hiking we usually do and I found myself excited for the days when Forest is able to ride a bike and we can bike around the campground, too.

We have a few more camping adventures planned for spring—hopefully!—and I’ll keep y’all posted on those trip reports as they happen.