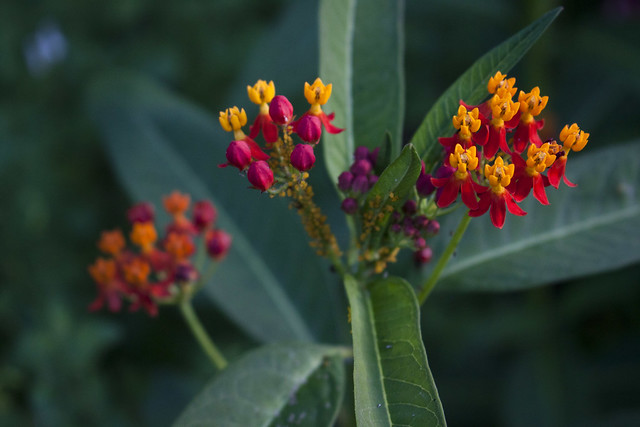 The patches of tropical milkweed have been blooming profusely the last few months and have now made it all the way into seed setting stage, with their fluff floating seeds about the garden, ready to start more milkweed wherever it pleases. Last year I moved a couple of plants that had sprouted next to our driveway about 30 feet away from the garden. 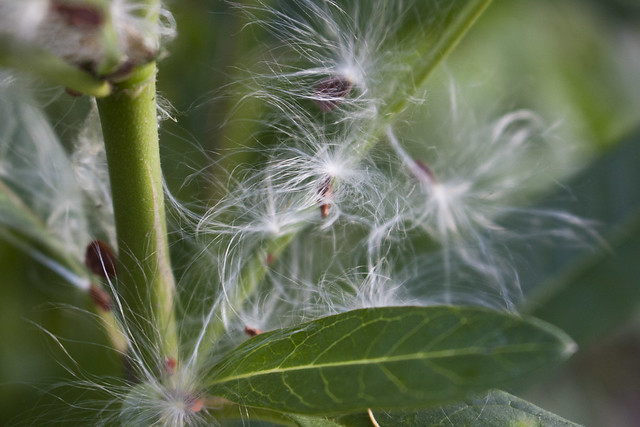 I went ahead and sowed some seeds on the potting bench in an effort to get more milkweed germinated ahead of the August/September return monarch migration in hopes of having some plants in containers by then. I have three I also dug up from the compost that are thriving in pots and will go into rotation should we decide raise some monarch babies. 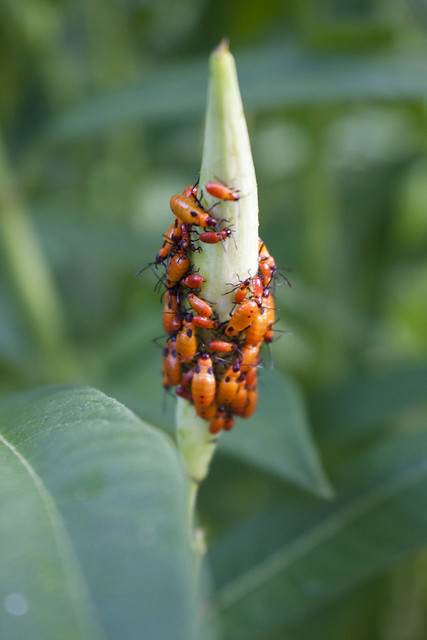 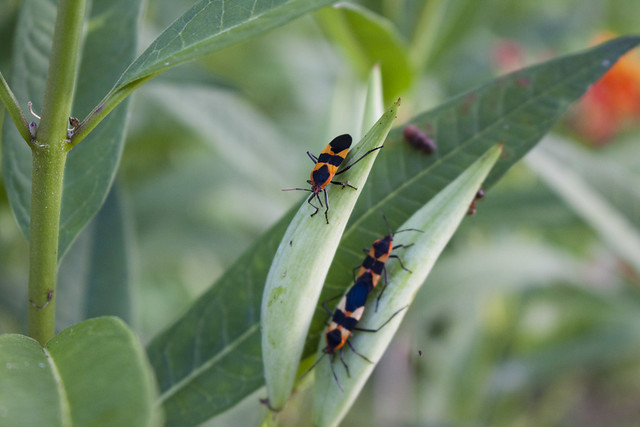 The milkweed patches have turned into little ecosystems of their own these days, between the milkweed bugs, oleander aphids, ladybugs, and some grasshoppers and spiders I’ve noticed on the plants. I haven’t seen a lot of monarchs recently but there was one flitting about a week ago. I have not seen caterpillars since April. 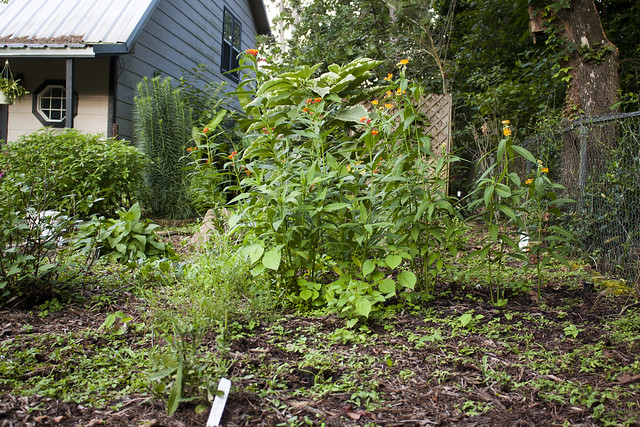 You can see some of the patch in the fenceline bed here, including the yellow version of the tropical milkweed over on the right. I’ve been working hard on this bed weeding it and it is looking really good right now. Still a few patches I need to get before I move on to other beds. This was taken before I did a lot of the weeding. 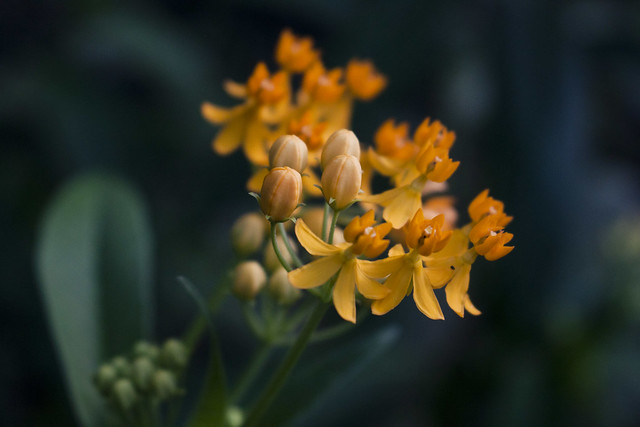 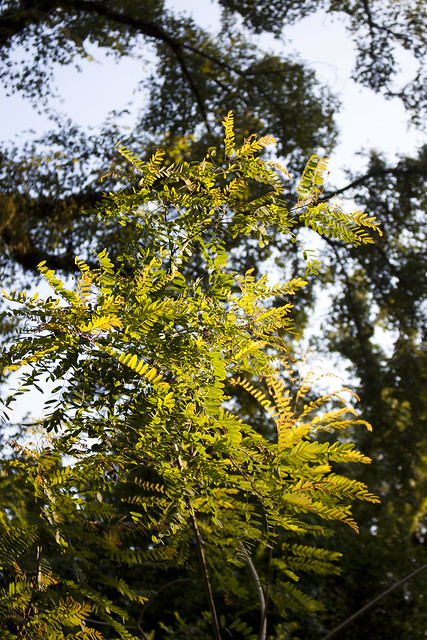 The evening light that pours onto the leaves of the Amorpha fruticosa always makes me pause and attempt to soak in it for a few seconds before I’m on my way to the garden. 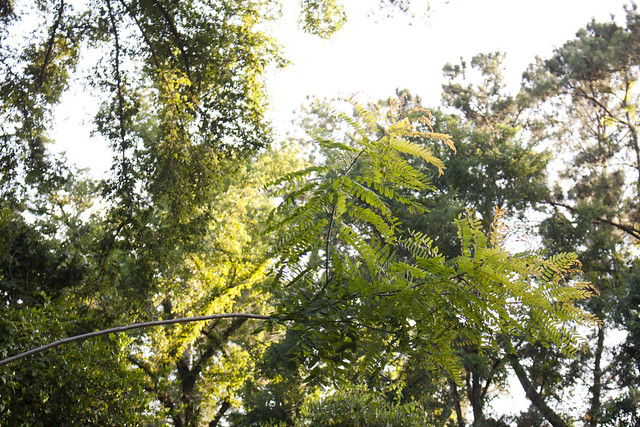 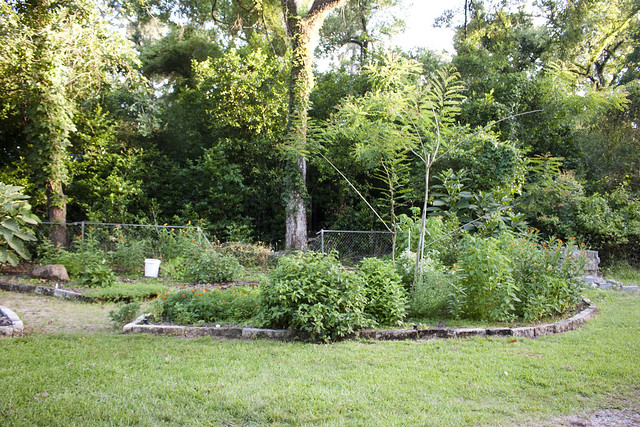 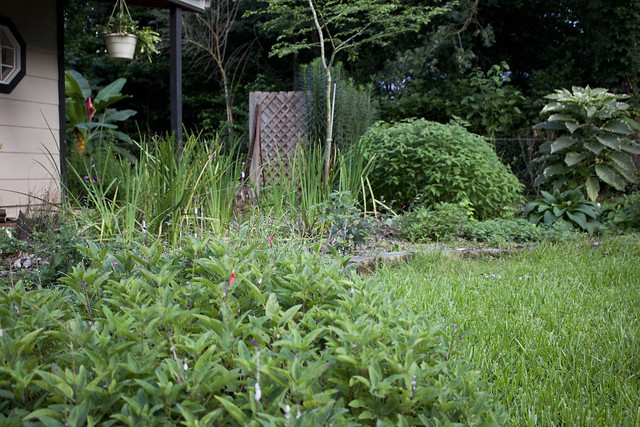 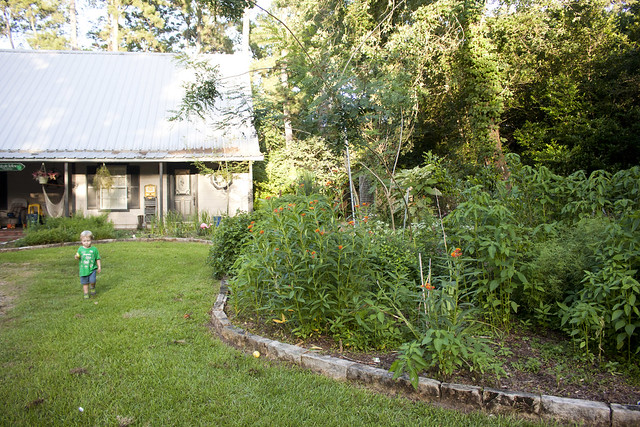 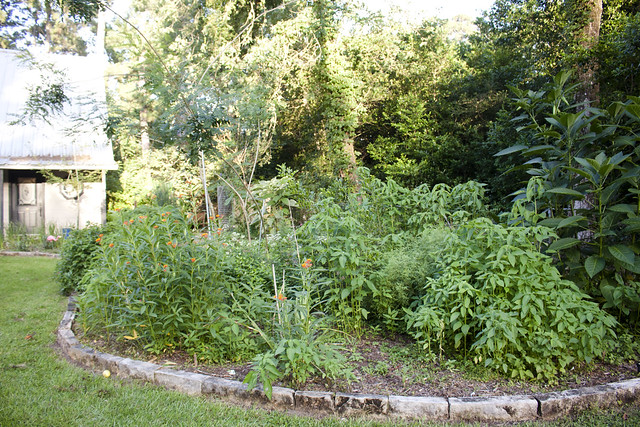 All of the beds are starting to fill in nicely, though there are some gaps that need to be filled and some plants that really need to be moved. 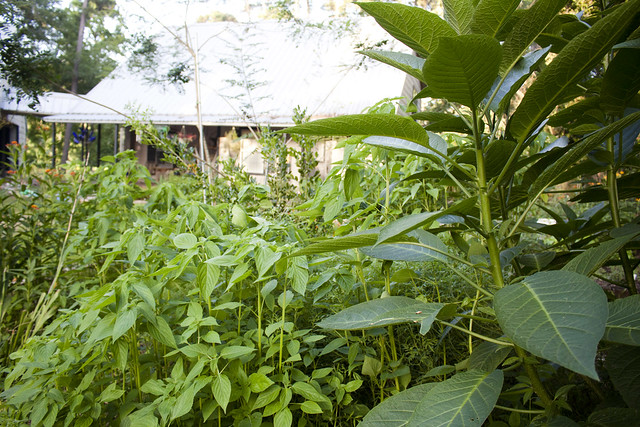 Earlier in the spring I threw some chia seeds out into the garden, a little too many—I had thin a lot and Chris didn’t like how thick some of it is—but I am pleased with how it has grown for the most part. Chia is a salvia and this produces a pretty blueish-purple bloom. I attempted to sow some two years ago on the side-yard bed but it was too shady and the plants never stood up well. They are thriving where they are now and look like they should start blooming soon. 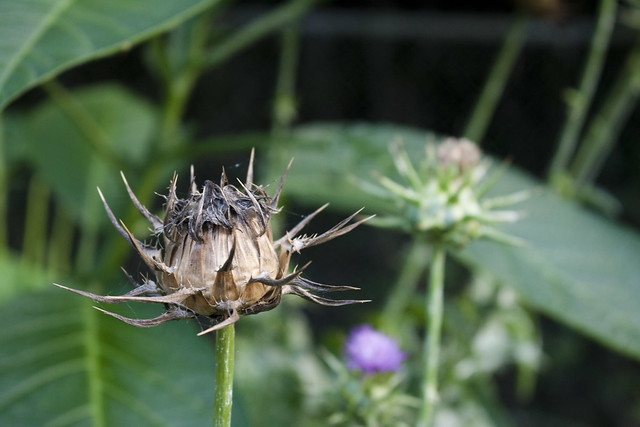 Most of the variegated milk thistle are gone to seed now. I have a huge plant I need to cut down in the edible garden and put into the compost. 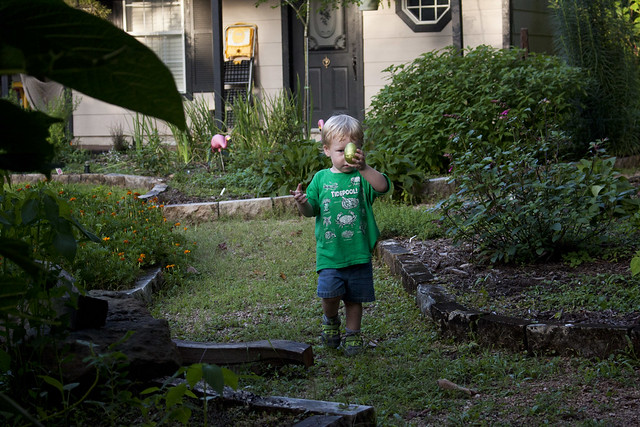 Forest is obsessed with Easter eggs right now so he’s been bringing them into the garden too! As you see in this photo, the paths need help. That focus is on the back burner currently until I can get a handle on some other weeds in the beds first. 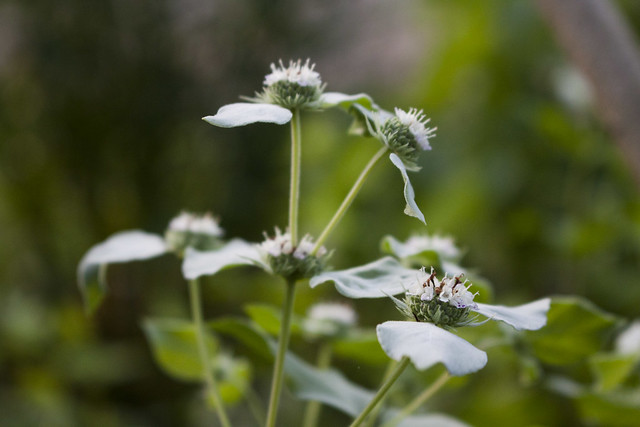 The mountain mint is clumping and blooming nicely under the Amorpha and has produced a layering effect that is pleasant to look at. I’m enjoying it a little more than previous years because it is a little more contained than it typically wants to be. 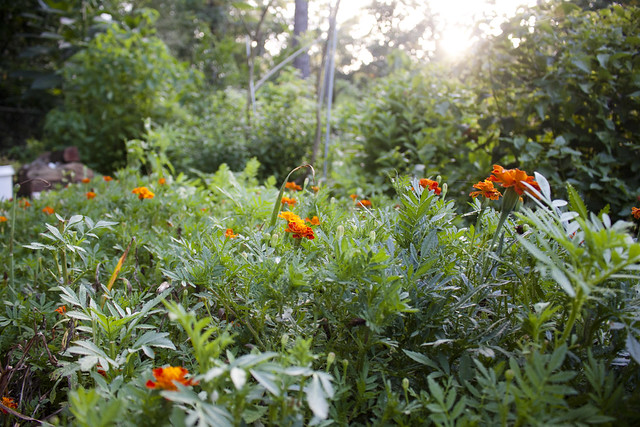 The marigolds that reseeded themselves from last year have done well taking over a section of the driveway flower bed and I’m fine with that. They bloom continuously and provide some cover to a decent sized area and always look great! 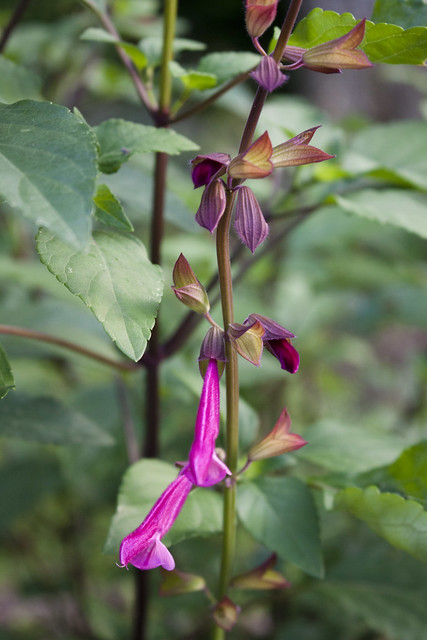 The winter knocked back the ‘Wendy’s Wish’ salvia but it has recovered and I’m hoping it will obtain the clumping size it has in previous years by the end of summer. 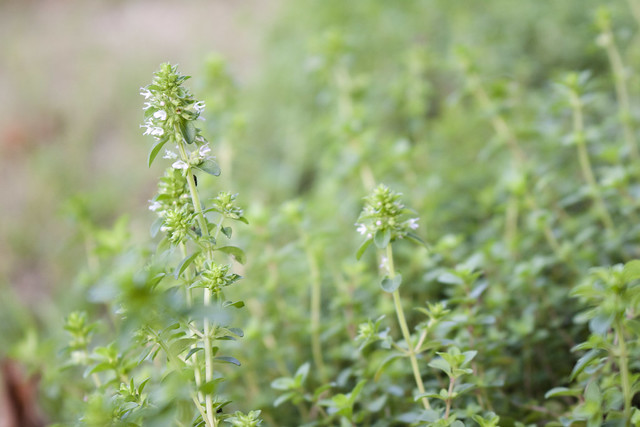 Creeping thyme doing its thing—creeping along and blooming! 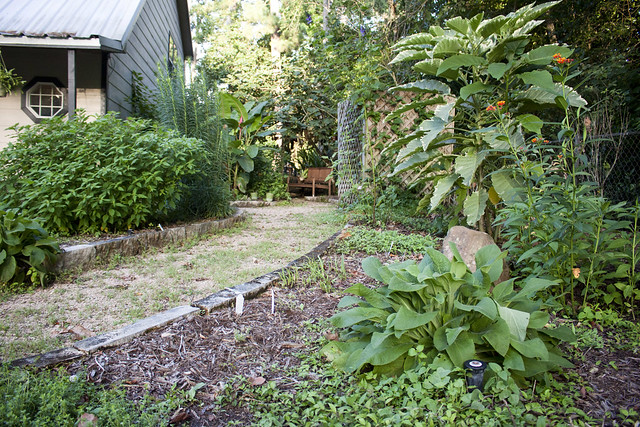 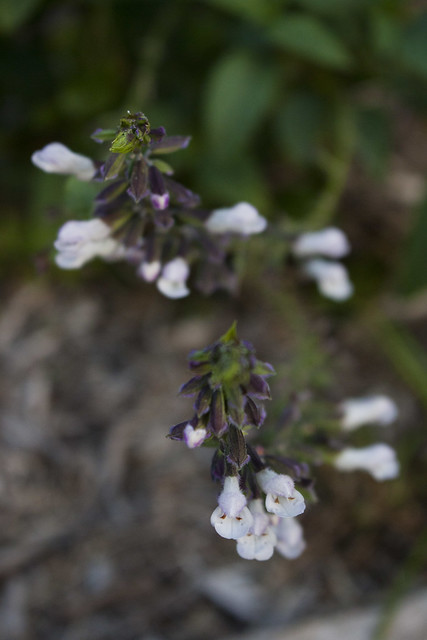 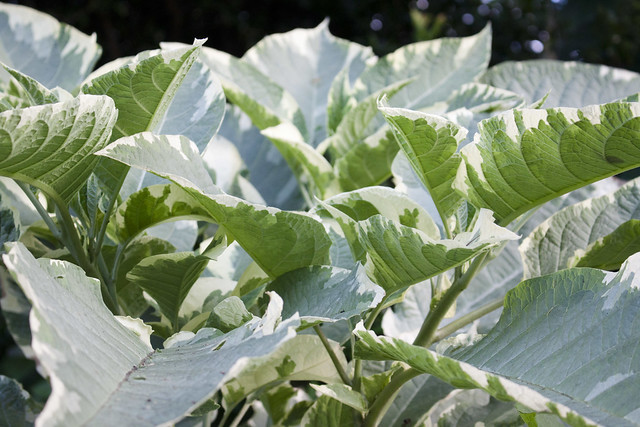 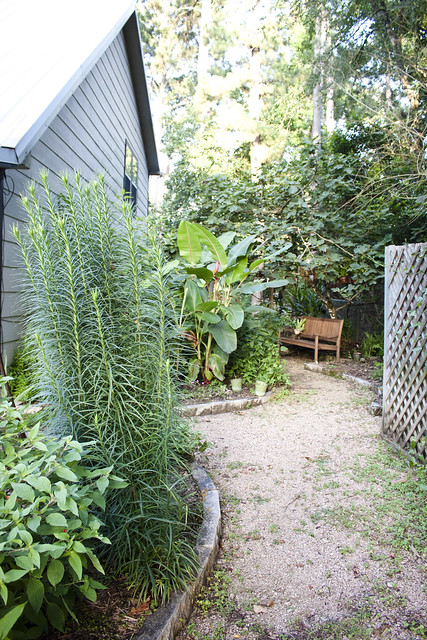 Over on the left the Formosa lilies are standing tall and ready to bloom in a few weeks. Love their blooms! 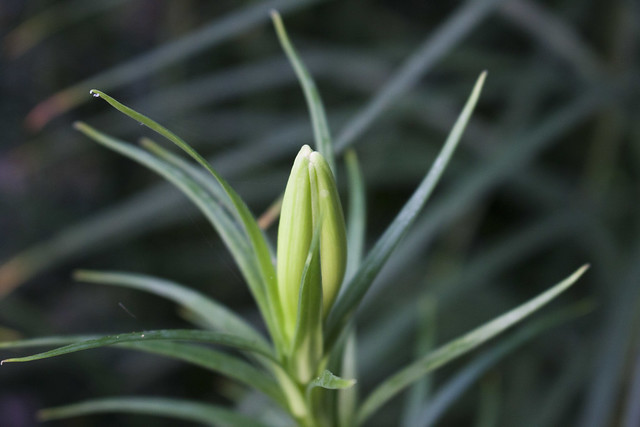 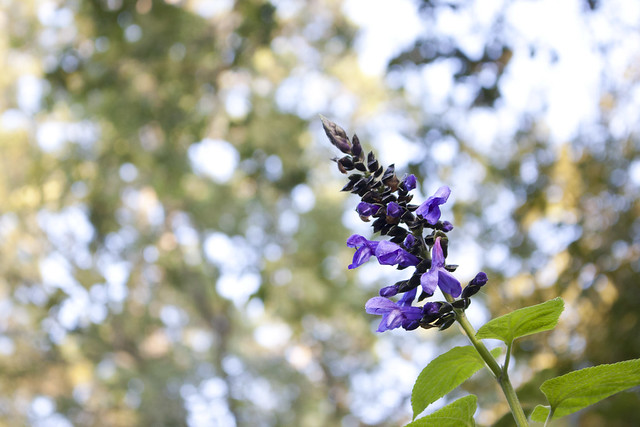 We missed our opportunity to move the ‘Black and Blue’ salvia earlier this season before it got big. It really needs to be moved away from the path and over to the back of the beds as it takes up a lot of space and always leans over into the path late in the season. This bloom is above my head, hence the sky in the background. 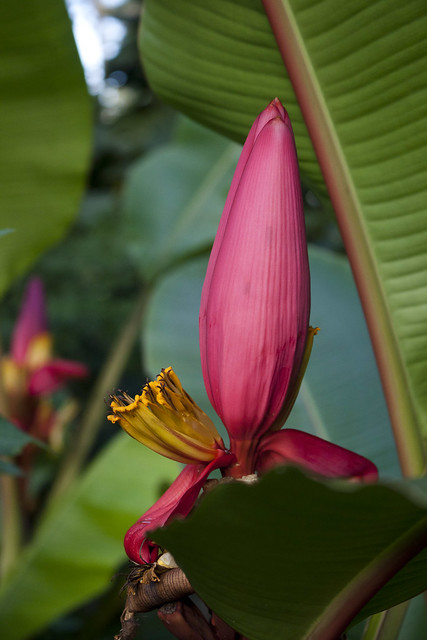 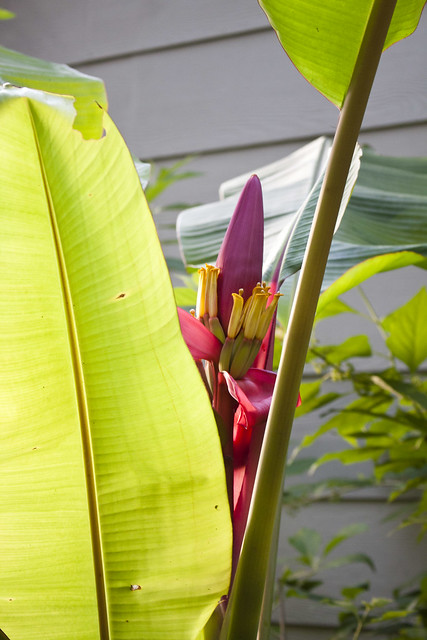 And it seems rather early for the pink banana trees to be blooming already but there they are. 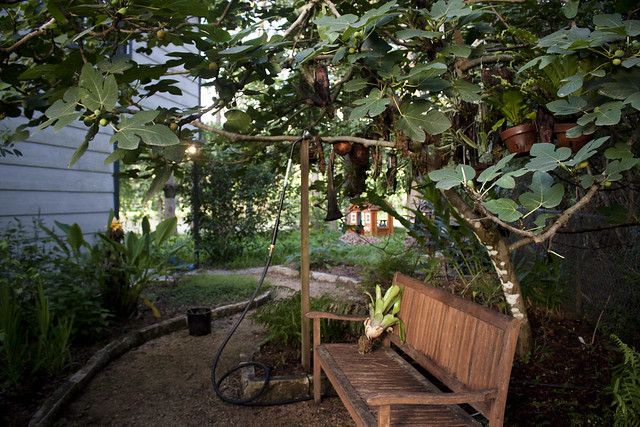 One last look towards the back of the side-yard garden. The figs are also starting to ripen, earlier than usual as well.

As you see, there quite a bit going on in the garden. Can you believe in about a week and a half we will have been living here for 5 years?? I’ll have to do a post about that, too.