As I mentioned in the wrap-up post we made it to Vancouver, and I had started feeling better but not well enough to be traipsing about Vancouver and cramming in all of the sight-seeing as possible. We weren’t in the country long when Chris mentioned that he still wanted to try to eat at the Old Spaghetti Factory in the Gastown portion of Vancouver. There is a trolley in the middle of the building and Chris thought Forest would enjoy sitting in it, so I gave the restaurant a call to see about reserving a table for dinner, which they did. My stomach wasn’t in the mood for much else besides Sprite and ice cubes in water so I didn’t know if I would eat.

Our hotel was a Days Inn near the airport, nothing fancy, but it was a much nicer upgrade to the Motel 6 we’d stayed in the night before in Seattle. Honestly, I could have slept the late afternoon and evening away and not gone anywhere but I managed to muster up some energy to drive into Vancouver. 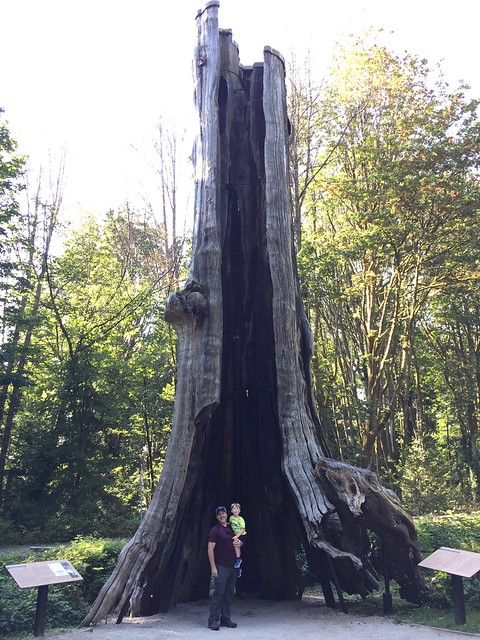 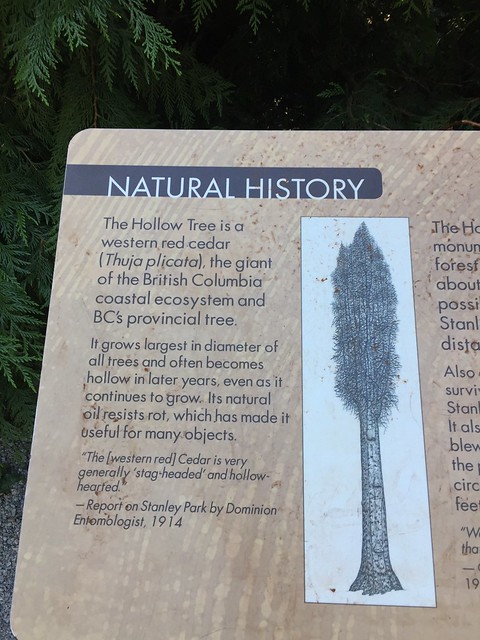 Before dinner we had enough time to drive through Stanley Park. Initially I thought I’d have enough energy to get out and walk but it became clear that all I wanted to do was sit. So, we drove the perimeter road around the park and then stopped at the Hollow Tree for a few photos before piling back into the car. The park itself was very busy with so many people out enjoying the late summer air. 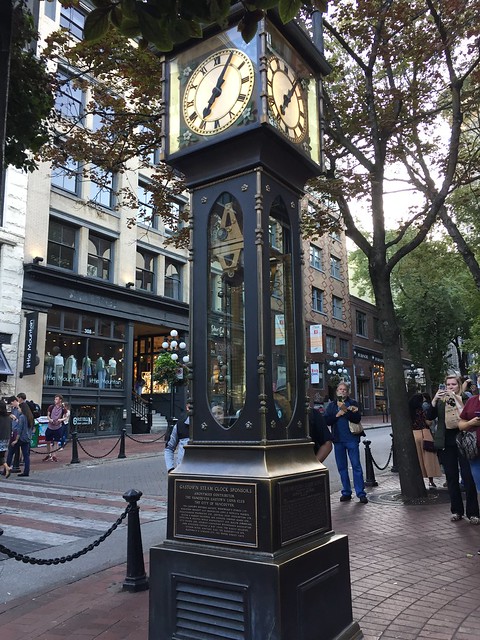 We ate at the Old Spaghetti Factory where I sipped a few bits of minestrone soup while Chris and Forest went the more traditional Italian food route. I so wish I had been feeling better to have enjoyed that restaurant more. Afterwards we dipped into a tourist shop to get a few souvenirs of our brief stay in Canada and then walked down to the steam clock to check it out. Forest was having some meltdowns because he just wanted to go back to the hotel and chill (as did I) but I was also enticed by the opportunities for street photography in Vancouver. However, I was not up for street photography at all. Chris had thought we might try to do the suspension bridge in North Vancouver after dinner but there was no way I was going to be able to stay awake for that, so we called it an early evening and went back to the hotel to rest. 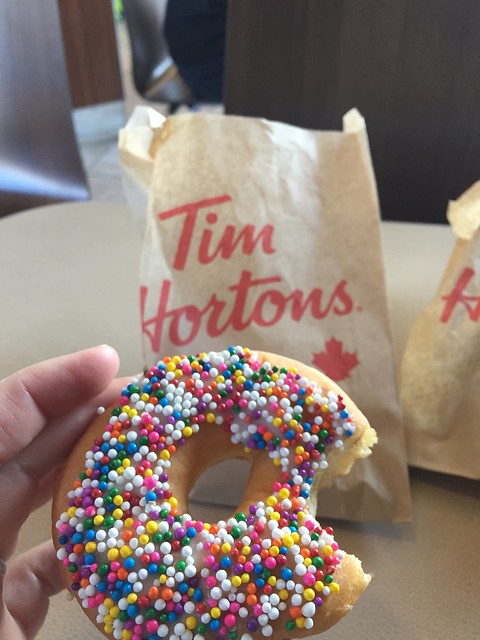 The next morning we packed up and needed to do a few errands before we returned our rental car and caught the shuttle at the airport to the cruise terminal. One of my requirements when in Vancouver was to go by a Tim Hortons to at least get a coffee. We managed to make it our breakfast destination and I somehow had an appetite to eat a doughnut and parts of a bagel. Having spent a lot of time getting to know some Canadian friends online over the last almost 20 years, I knew Tim Hortons was one of those places I just had to visit. It’s nothing spectacular, basically a fancier Dunkin’ Doughnuts/Starbucks combination, but it was a Very Canadian Thing and I wanted to visit! 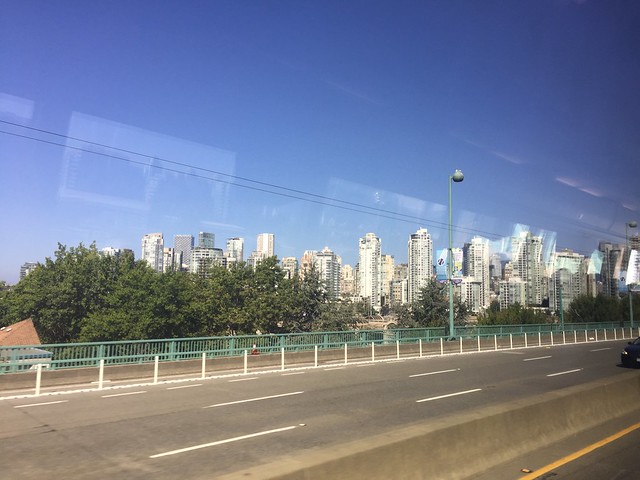 After breakfast we found a Walmart where we wanted to procure a few snacks for the ship for Forest in addition to some t-shirts for him after we decided we might not have packed enough. I’d packed more long sleeved tees but the weather was nice in Vancouver, surely he would want more t-shirts! Haha, he didn’t wear any that we bought because the temps changed as we moved north! But the snacks we did need, as we weren’t sure how much Forest would eat on the ship, being a picky eater and all. So, we found a Walmart in North Richmond and it turned out to be a triple decker–a parking garage on the bottom, and then a first and second floors once you went up the escalator. Very urban! I also saw the most giant tub of Cheez Whiz I’ve ever seen there! It was out in the middle of the main aisle, you know where they try to promote sales and such, so I wondered if this was a ‘thing’ in Canada. I can’t remember the last time I even ate Cheez Whiz on purpose—the 80s? 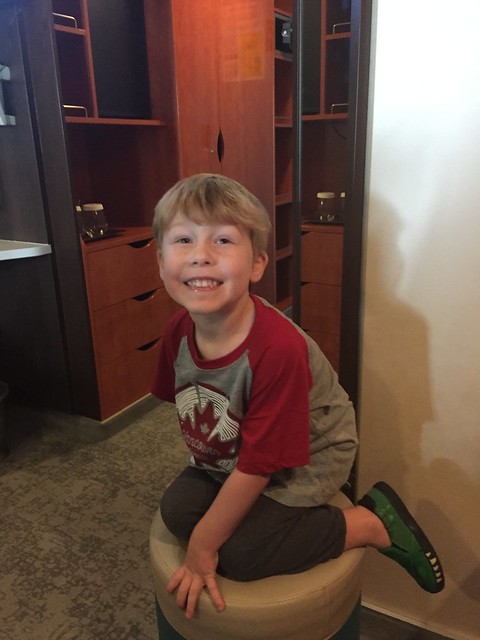 Then we drove over to the airport and returned the car. After we walked into one of the terminals, we kind of looked around lost until we saw an employee and asked them where we needed to go to check in with the cruise agency. He led us through a glass door and into the area where people are normally exiting from the terminals and then to a series of cruise desks. This was one more nerve wracking thing–hoping that the cruise company had everything in order and we were on their list. Of course we were, but after the hoops and changes we’d gone through the previous days, everything was worrying. She took our checked bags and they were going to be sent separately from us and we’d find them in our rooms later that afternoon. With our carry-ons we went outside to wait for the tour bus to pick us up.

Once the bus arrived we settled in for another stop along the way to get guests in the domestic side of the airport and then we were off through the streets of Vancouver once again. The bus operator was nice enough to point out sights and give a bit of a tour along the way. Since I had started feeling better that morning and because of the tidbits of information, I was feeling nostalgic for leaving Vancouver so soon! We would have to come back here at some point in the future.

After 30-45 minutes we finally arrived at the cruise terminal where we followed a series of signs and lots of terminal personnel guiding guests to their ships. We were boarding the Norwegian Jewel but there was also a Disney boat in port, too, and Forest was hoping that was our boat! We had looked at Disney cruises but they are significantly more expensive!

Finally we arrived in a giant reception room with various lines cordoned off depending on what your state room class and other such items. One personnel worker saw Forest with us and shimmied us into a very short line that I think was labeled for guests with special needs. Our tickets weren’t labeled for any such thing but she had the insight to know that the winding line we were about to get into with our soon to be 5 year old was not going to be a good line to get into. We were very thankful for her or we’d have been standing in the other line for, I dunno, 30-45 minutes at least.

This time it was to clear US Customs. The line was shorter because we’d basically jumped ahead of everyone else after checking in with the cruise agents. The border agent there even joked about making it difficult for him with the birth certificate because he couldn’t just scan all three passports and had to actually review things a bit more, but it went fairly easily and then we were ‘back in the US’ for all intents and purposes. I had wondered how they were going to handle this, if we were going to have to go through customs in Ketchikan, but this way it made it easy on everyone once we’d arrived in Alaska. 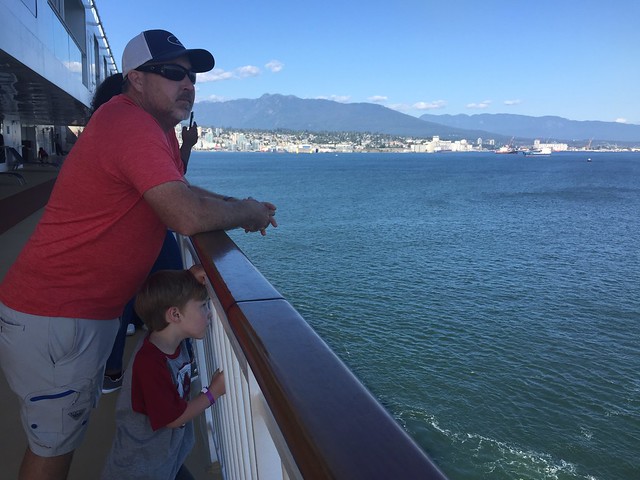 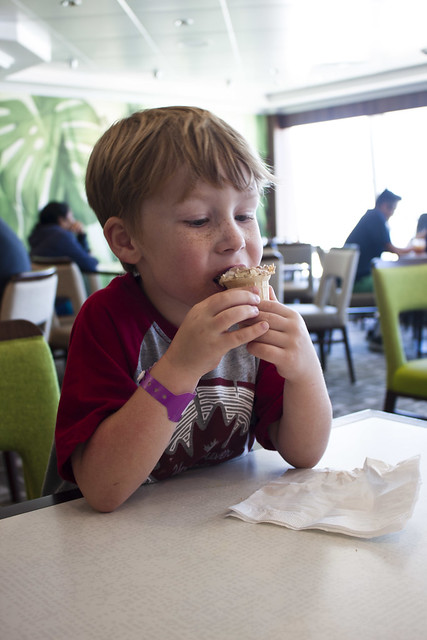 We had time before the boat left port and before our rooms were ready so we went up to the buffet to eat lunch and relax a bit. The best parts about a buffet are the desserts of course! 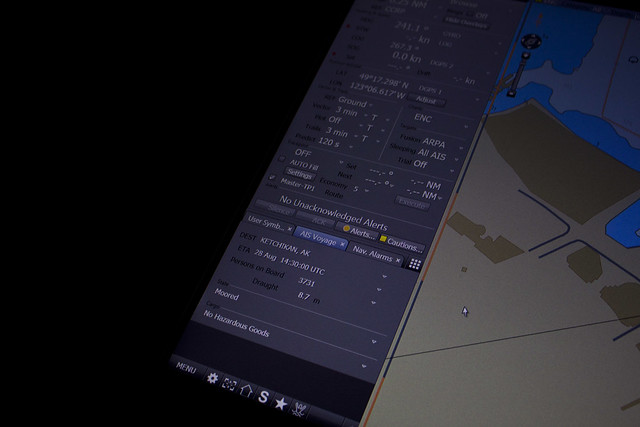 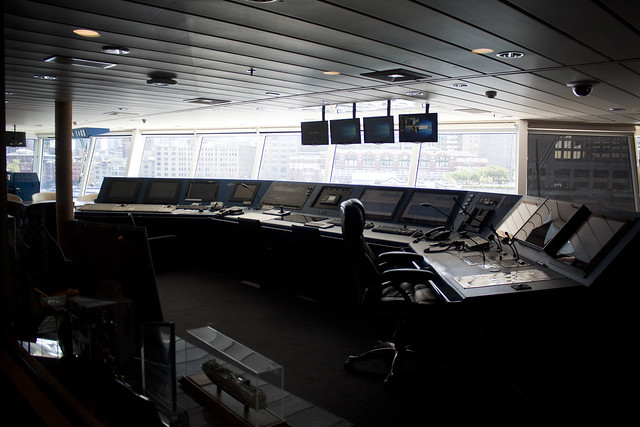 We toured the ship, peaking into the bridge to see where the captain and crew would be steering the ship… 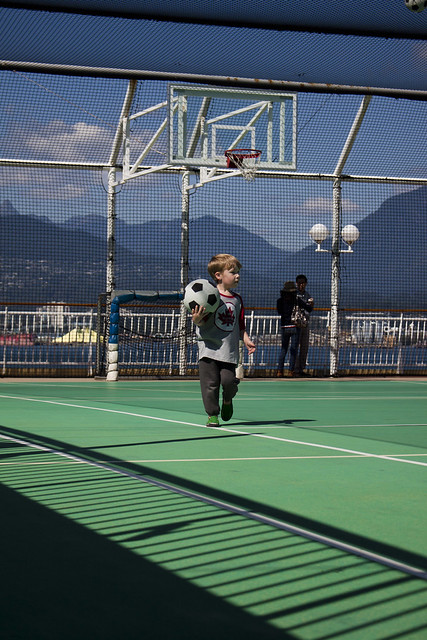 and up to the outside decks to check out the play spaces for Forest. We even signed him up for the kid’s club so that he could go there and play with other kids but when it came down to actually getting him to go, he wasn’t having it! 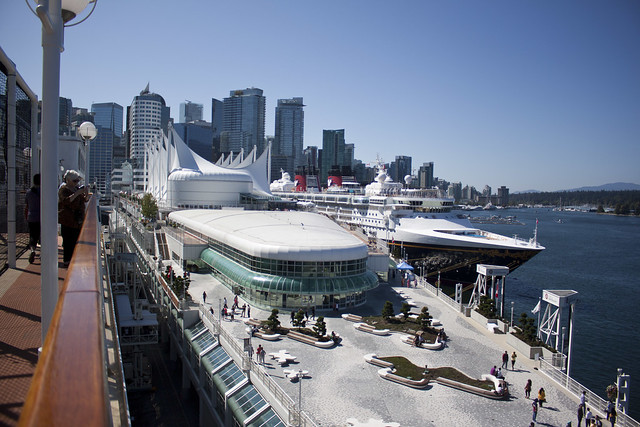 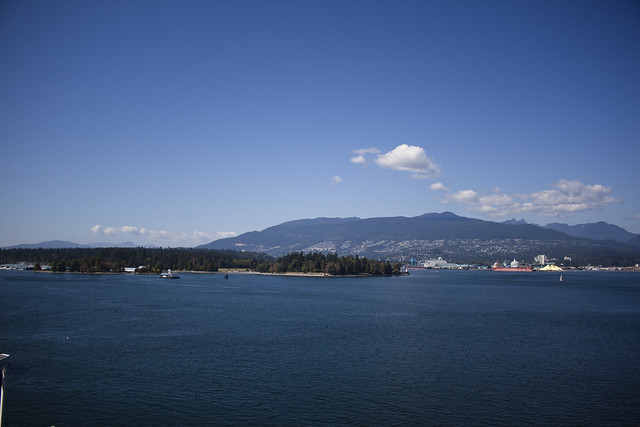 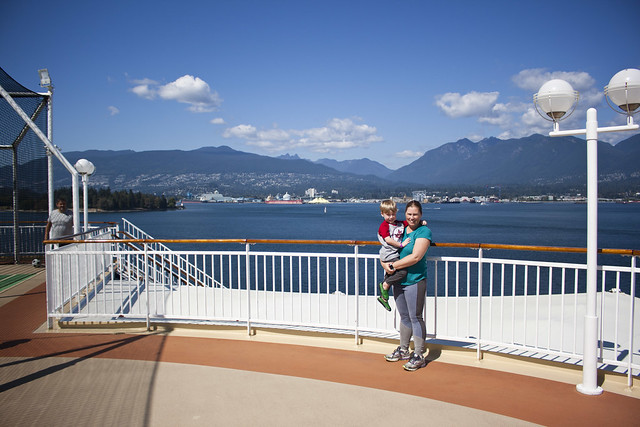 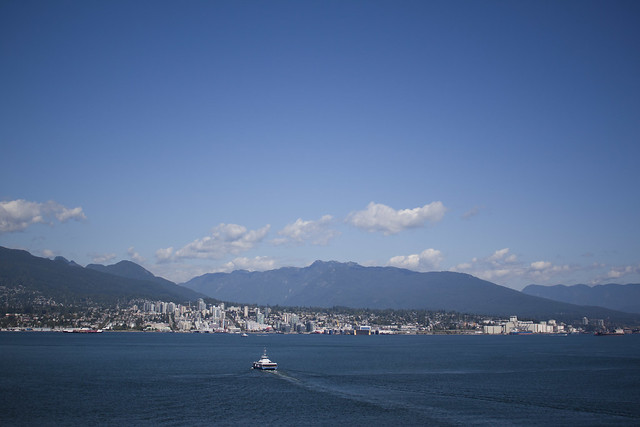 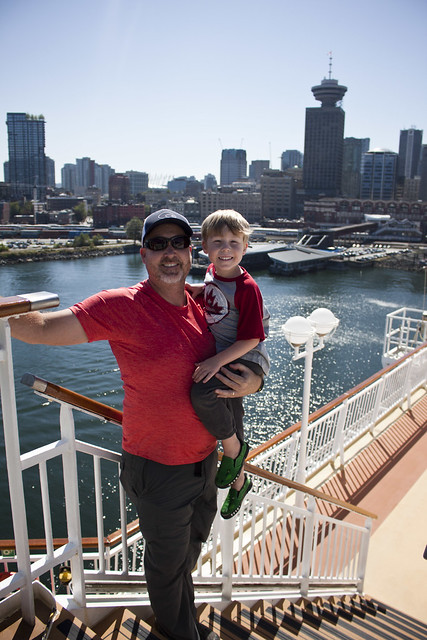 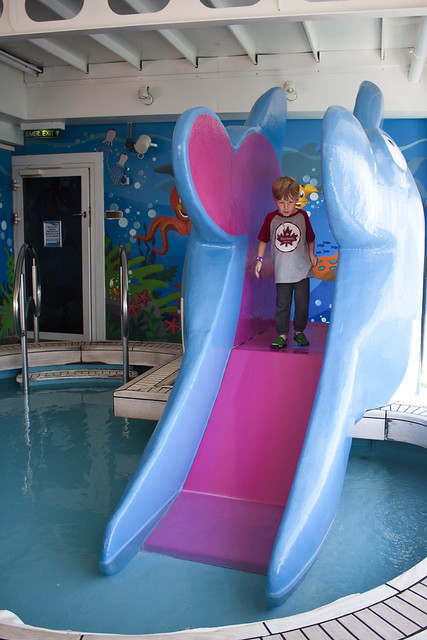 Forest only ended up swimming one time on the ship, the day we left port. It ended up getting too chilly otherwise. 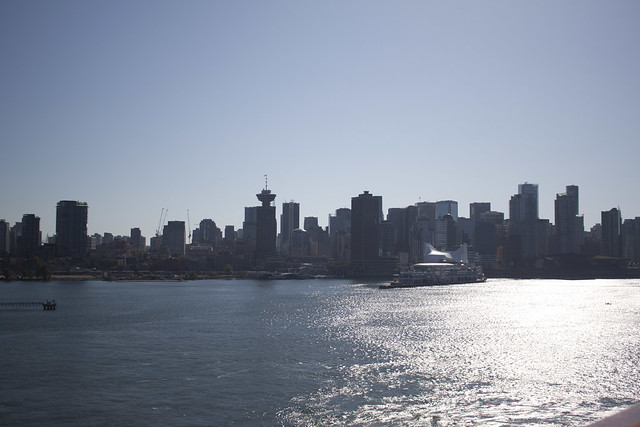 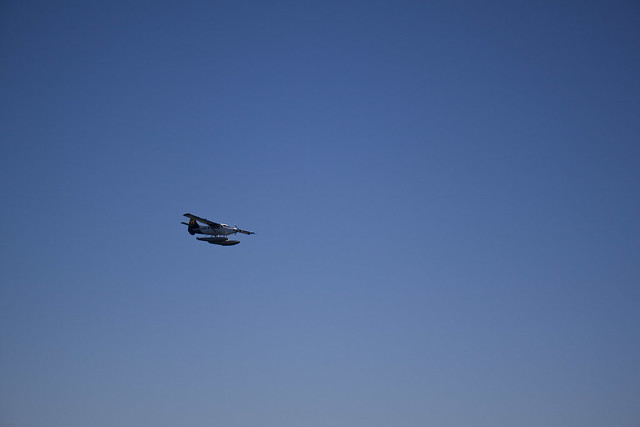 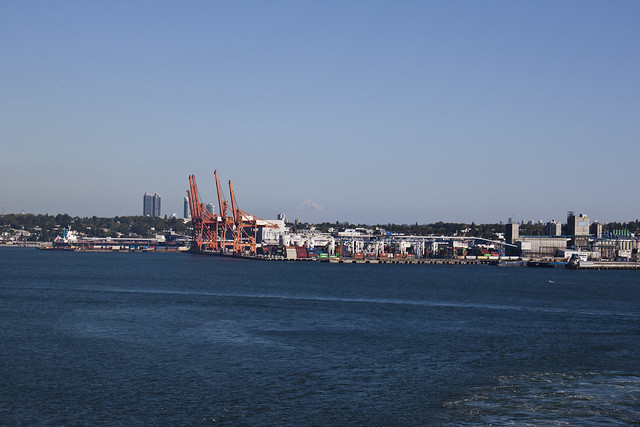 As we left, the sky cleared up on the horizon and this giant mountain made an appearance. 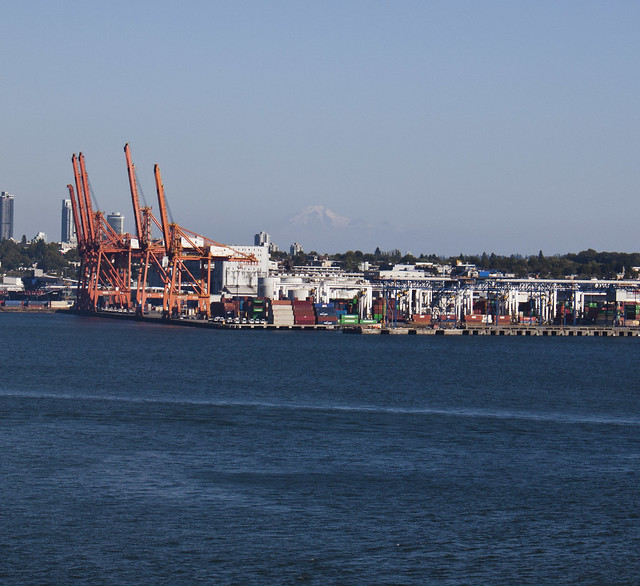 I zoomed and cropped so you could see closer—it turns out this is Mt. Baker which is in the US in the northern Cascades. I think it may be about the same distance as Seattle is to Rainier or maybe a little bit further–I’m just eyeballing on a map–if you want some perspective on how far away this is. 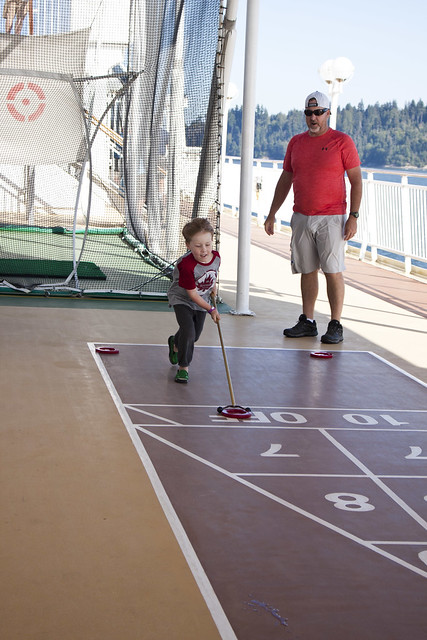 Forest found a new game to play, his version of shuffleboard! 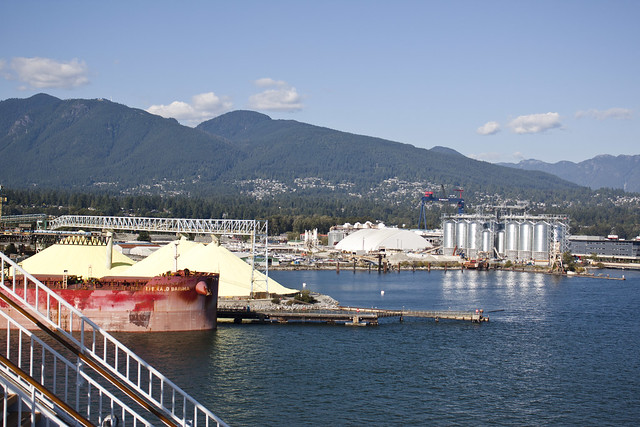 A sulphur pile—it made Chris and I reminisce about the sulphur pile that is across from our college campus in Galveston! 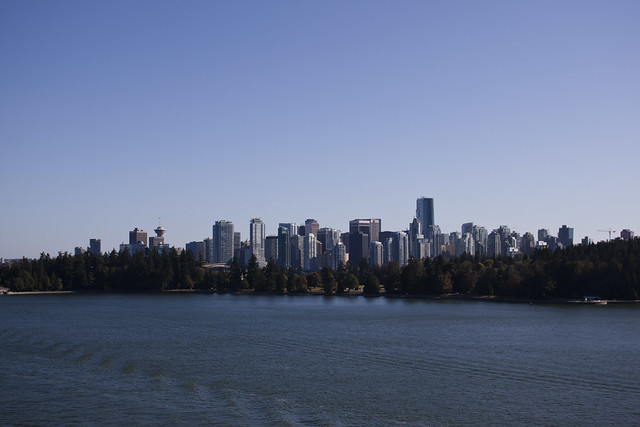 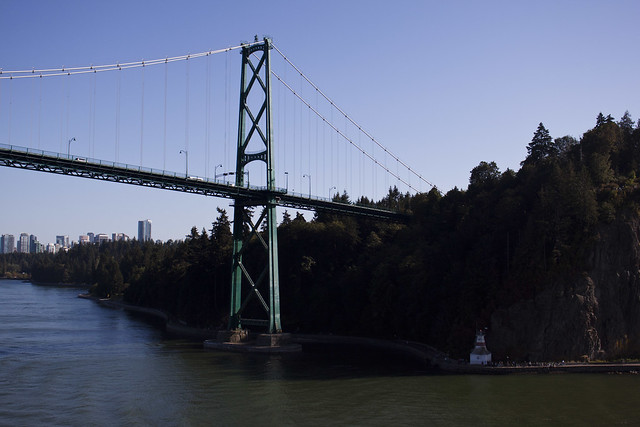 And another glimpse of Stanley Park. 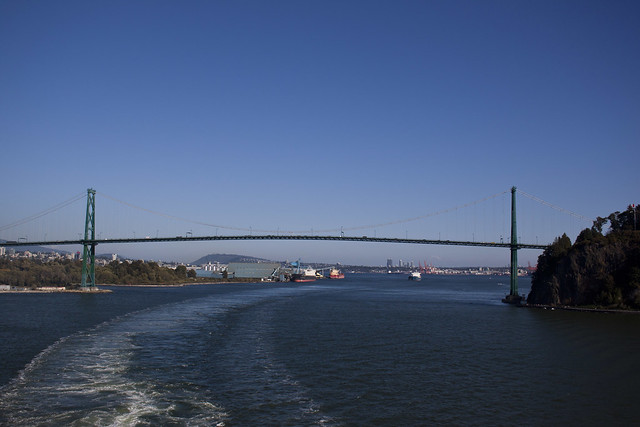 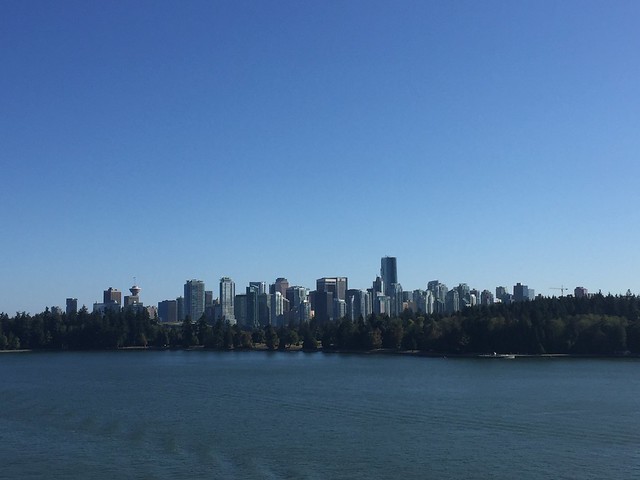 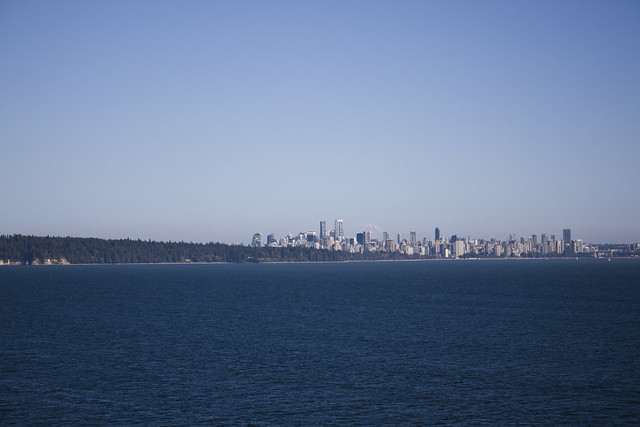 I didn’t realize when I took this photo that Mt. Baker is beaming there in the background!

And then we were off, headed for the Inside Passage!