First, I’m going to share the photo from FT ThruHike comparing the group in 2014 versus this year’s group. To recap for those who are reading and utterly confused—in 2011 we thru-hiked the Florida Trail. Only a handful of people were hiking that year and the trail community was pretty quiet except for a couple of people, namely Randy and LuAnn Anderson, aka: Chuck Norris and Tigger on the trail. They were running a shuttle to help hikers along the trail as a method of support, both morally and physically, and started their hike with the main group, again just a handful of people, about a week before us. By the time we reached the Orlando metro area we had caught up to the group and got to meet them at David Miller’s (AWOL) house where the group of thru-hikers had convened for a night or two as they worked on the road walks around Orlando. We ran into the group again when we reached the Lake Mary area of Orlando and after that we separated from the group and continued our hike ahead of the pack. Our friend Speaker had been hiking around that group and we knew him from the Appalachian Trail and he ended up catching up to us, after we passed the group, in Ocala National Forest. We’d heard about a day off to celebrate some guy named Billy Goat but at that point we were ahead of the group by a day or two and weren’t really keen on getting off trail to socialize. Speaker was going to get picked up at the southern entrance to Osceola National Forest which is where we split off for a few days so he went to one of the early Billy Goat Days. And of course, it turns out that Billy Goat is very well known in the hiker community, particularly on the PCT, but we weren’t that entrenched in the hiking world at that time.

Cue years later as the Florida Trail community slowly began growing—really 2014 and 2015 started seeing an increase in thru-hiker awareness and with the help of social media the boost was slowly coming. That small gathering began to form at a park instead, in a more mid-way point where thru-hikers would be getting by the end of January, the Orlando area. I had been watching this gathering grow over the years and especially when I started the podcast I had inklings in the back of my head that I wanted to attend someday. So, this summer when the date got nailed down I looked at plane tickets and knew it would be worth the trek to Florida for a few days to camp, meeting folks, record some interviews, and really just be a part of the trail community when in actuality I’m several states away from the trail. That’s one thing about this podcast that I wanted to be different from some of the other long trail podcasts—I wanted it to be more encompassing than just a thru-hiker podcast. Of course thru-hikers are an integral part of the podcast but so are section hikers, day hikers, trail angels, volunteers, FTA reps, land owners, etc, etc. I wanted to represent the whole picture as best as I could.

It may be Billy Goat Day this year, and maybe one year it will be the Kick Off or an FTA event, of which there are many throughout the year, but the goal is to keep in the actual community as best as I can from afar. I love the FT!

Alright, on to some photos of the celebration! 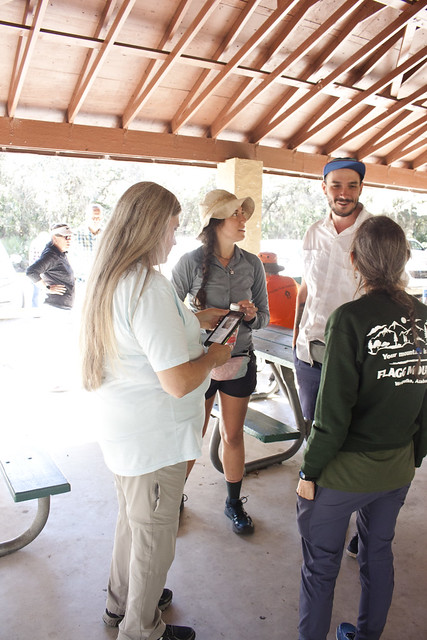 Sandra Friend, Lotus, Jupiter, Denali – Sandra is the author of all of the FT guidebooks and proprietor of Florida Hikes; I just met Lotus who is hiking with and is the significant other of Jupiter, and Jupiter is known for his FKT of the FT a few years ago as well as an ECT southbound hike at the same time—plus the many Ocean to Lake hikes he’s undertaken; Denali is the first woman southbound FT hiker back in 2015 and also has some extensive trail background. 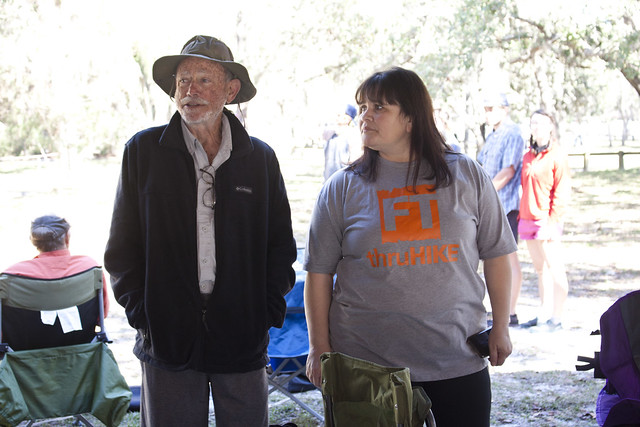 Grits and Frosty – Grits is a hoot and has hiked the trail 3 times plus mostly the entire trail another 4 or 5 times. He spends part of the year hiking on the FT and AT and the other part at home in southern Georgia. Frosty is also known as Kelly and lives in Crestview, FL, where she is a trail angel. I talked to her and her partner Flattop on episode 8. 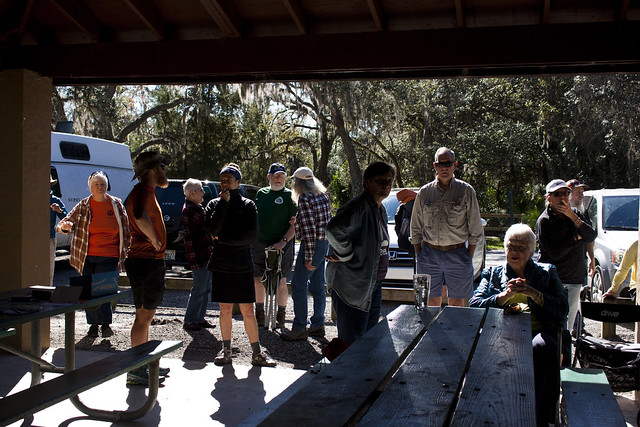 Early in the gathering before a lot of the crowd arrived. A few people I can point out here, from the left: The guy in the hat is Larry Boy, I can’t remember the name of the woman he’s talking to but we chatted for a while and she had an extensive hiking background and was planning on hitting the FT right after the party, Nimblewill Nomad in the plaid, the woman looking towards me is Vera Hurst who is a trail angel and very active in ALDHA and AT hostels, and the woman sitting down is Joan Jarvis and is a trail angel in the Orlando area and active in the FTA. We had a brief encounter with Joan on our urban hike through Orlando back in 2011. We were going through a crosswalk on the Cross Seminole Trail and she had pulled up to the stop sign to wait while we crossed. She yelled out the window to ask if we were FT thru-hikers, to which we said yes, and then she asked if we needed anything and said she was sorry she didn’t have any trail magic to give us at that moment. It was a quick moment in time but I have always remembered that. She does a lot for thru-hikers as they come through the area. 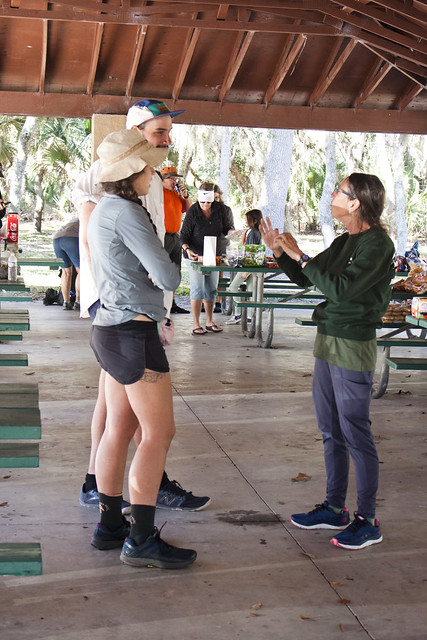 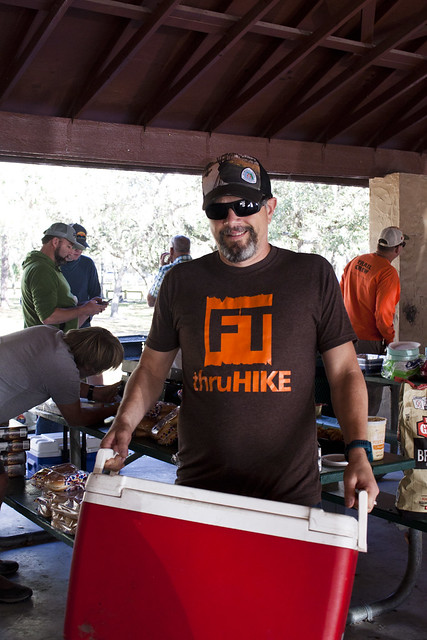 Chris aka: Water Bear from the Sunshine State Seekers 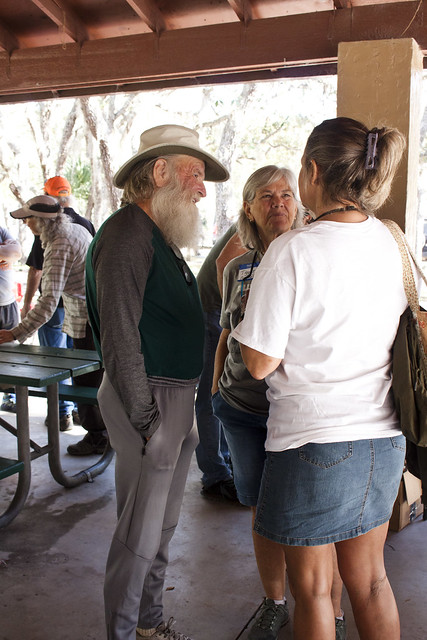 Billy Goat and Tigger—not sure who the woman is with her back turned to me. 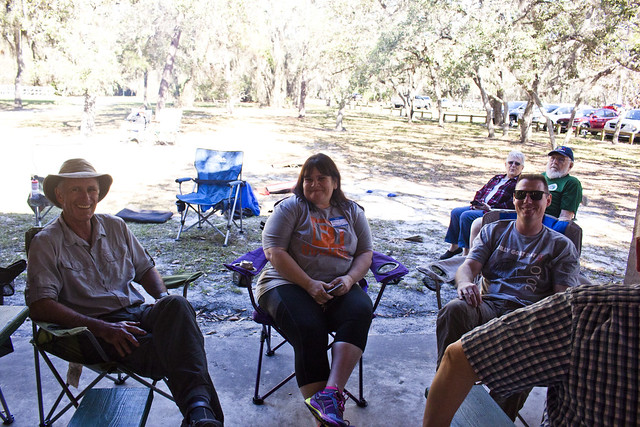 Steps, Frosty, and Flattop. Steps and Flattop are currently thru-hiking right now. Flattop had been caring for his ill father for the last few years and he passed away and now Flattop is able to get out on the trail. 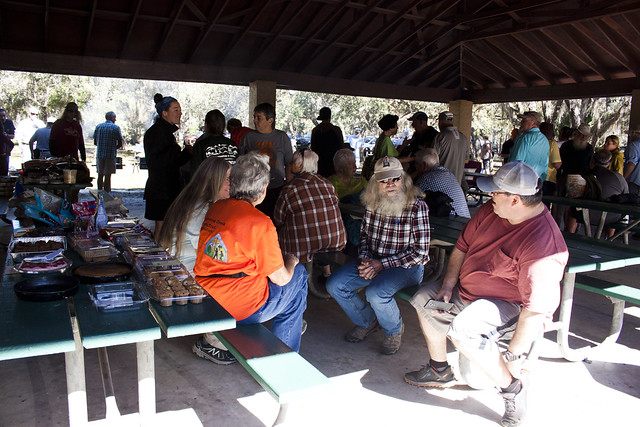 Nimblewill Nomad chatting with a group of hikers. 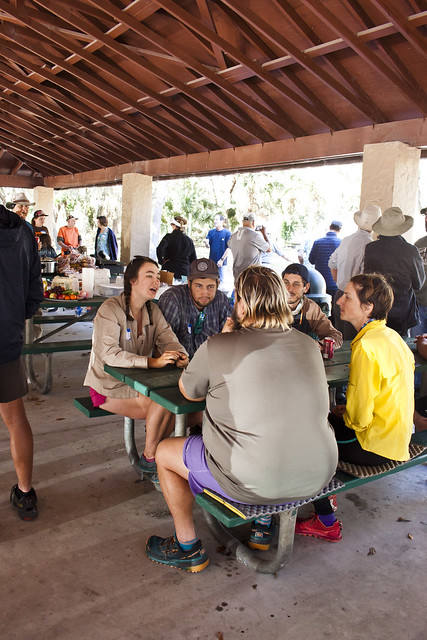 A few of this year’s thru-hikers: Hannah, Will, Philly, Lite Brite and Hulkspiration. The latter two have a blog here: The Gypsy Itch. 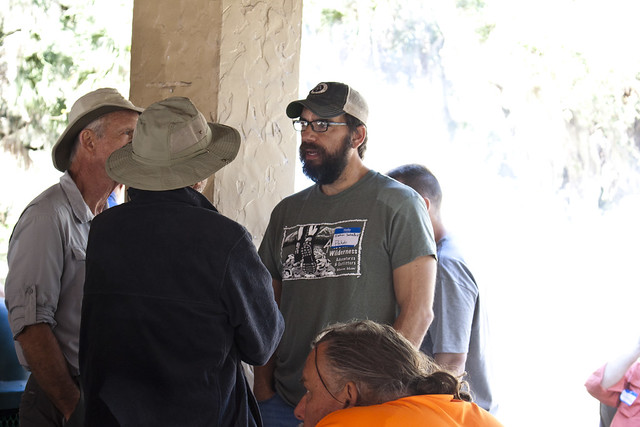 Nathan Wright is with the Pinhoti Outdoor Center. He’s talking with Steps and someone I can’t identify here. 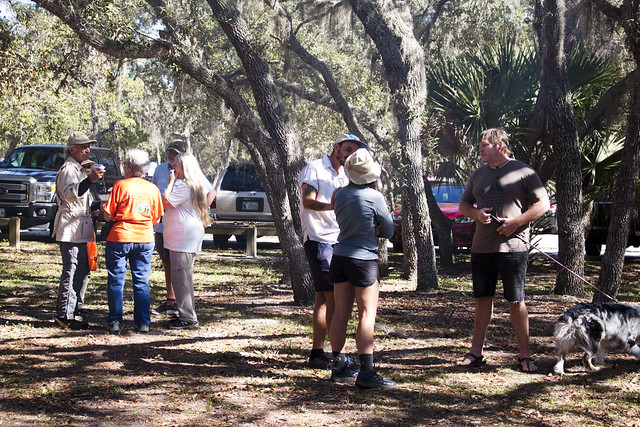 Two groups of folks here, the far left: Jim Kern, I think Betty Loomis an FT Trail Angel, Sandra Friend, and not sure on the other man.
The other group is Lotus, Jupiter, and Poet. Poet is the current owner of Shaws Hiker Hostel in Monson, ME and he thru-hiked the FT last year with his family following along in a van. 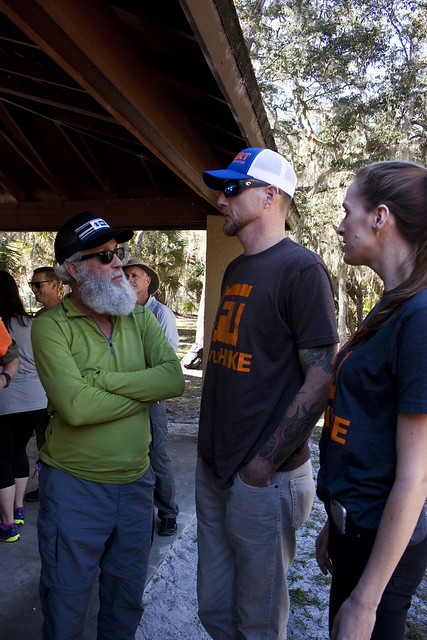 Trucker Bob, an FT Thru Hike board member, and Chuck aka Duck and Madeline. I first came to know Madeline through a running blog she kept about 10 years ago where she chronicled her runs through Florida wilderness. She’s also an artist and became an elementary art teacher in north Florida. It was really great to finally meet her after all these years! She was on episode 4. 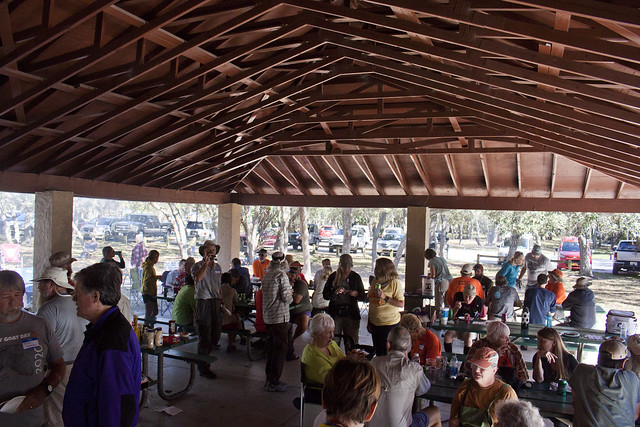 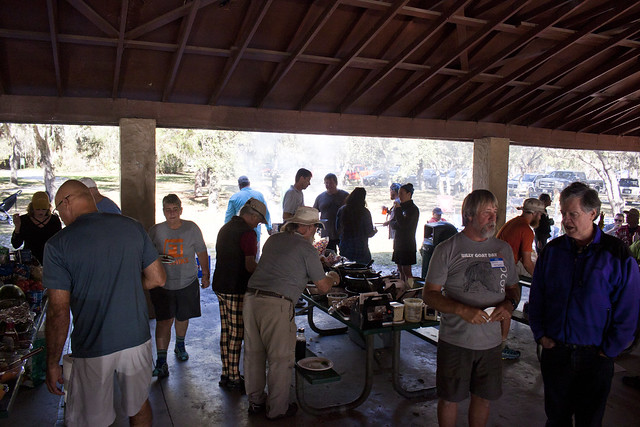 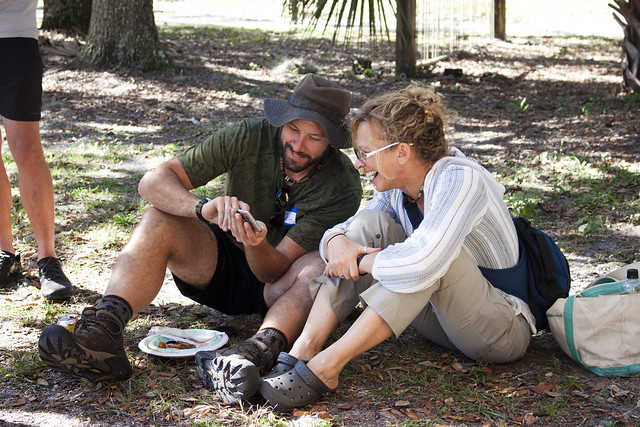 Turtle and Pup (pup is not pictured) and the woman I met but her name is escaping me now. She was very friendly and had hiked the AT and was investing a possible hike of the FT. 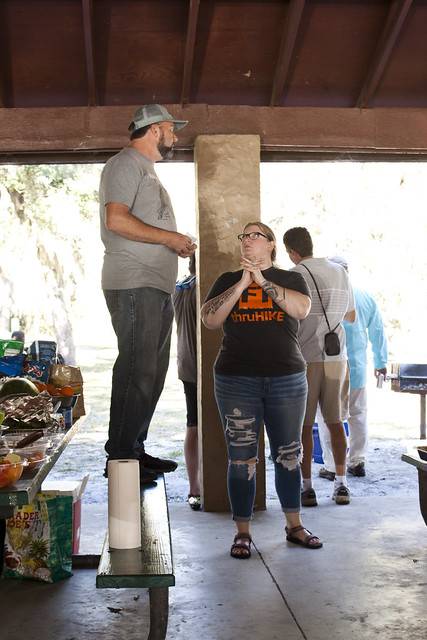 Chris Bell and Eleni—Chris is the president of the FT Thru Hike group–formerly Florida Trail Hikers Alliance—and Eleni was the secretary but has resigned due to a pending move out of state. Eleni has become a good friend of mine through the last few years. Episode 14 with Eleni and episode 27 with Chuck, Tigger, and Chris. 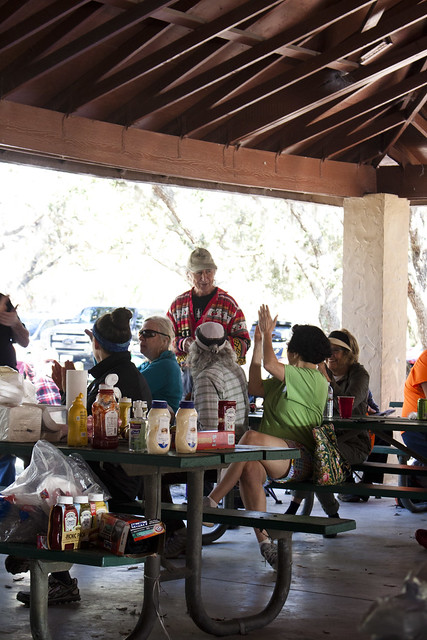 Jim Kern being recognized for his part in starting this whole thing, the Florida Trail. 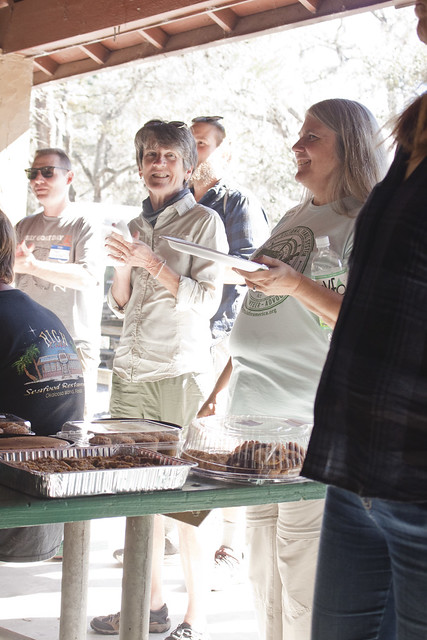 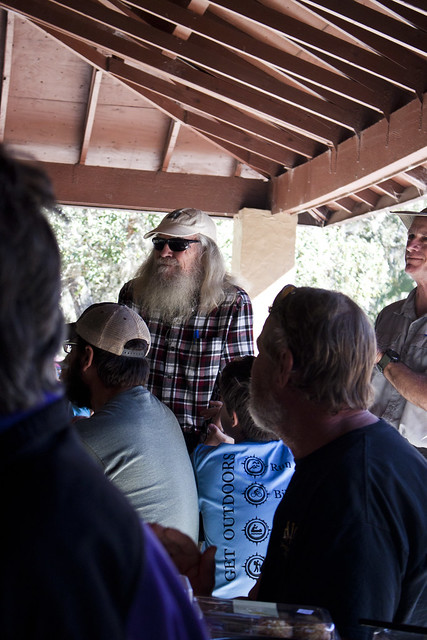 Nimblewill Nomad being recognized for his extensive hiking life. 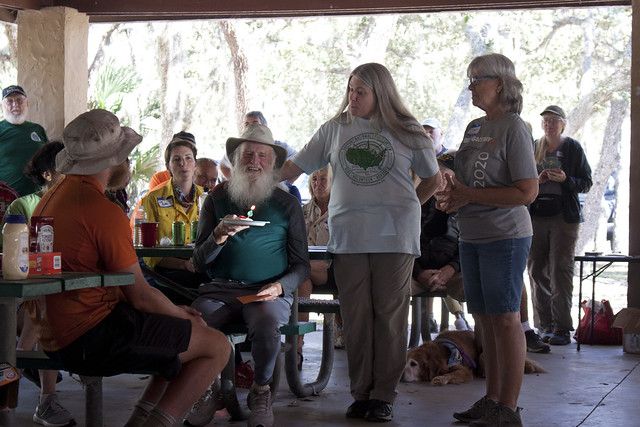 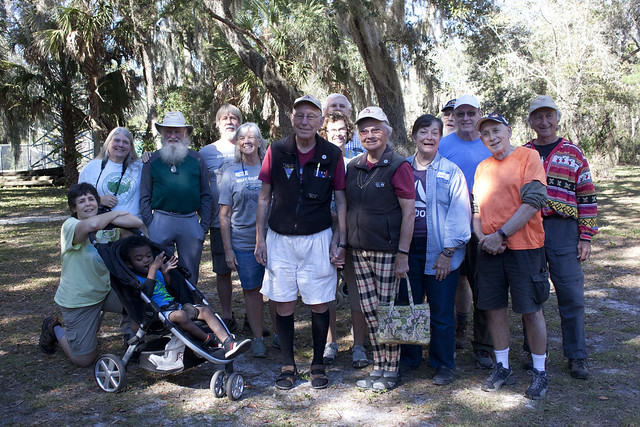 I took this photo for Vera of the folks present who were members of ALDHA. 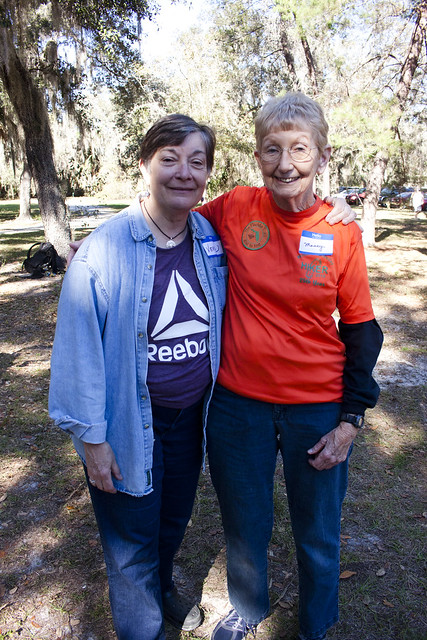 Vera and Mosey—Mosey was a sweet lady from somewhere in the southern portion of the state who had section hiked the trail over a few years back in the 2000s. I would have loved to have recorded some audio with her but I don’t think she quite knew what a podcast was and several of the older folks I talked to were more hesitant to share their stories than the younger ones. 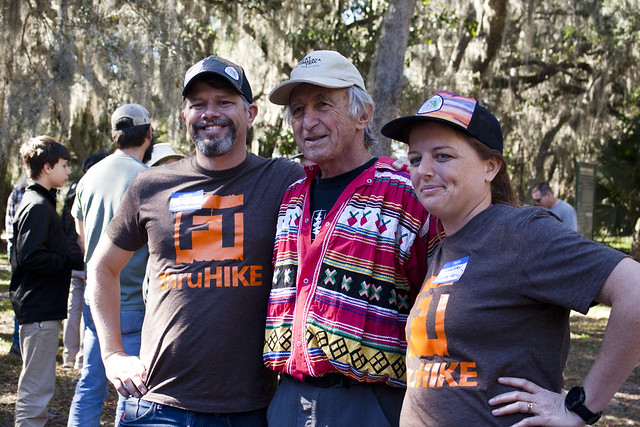 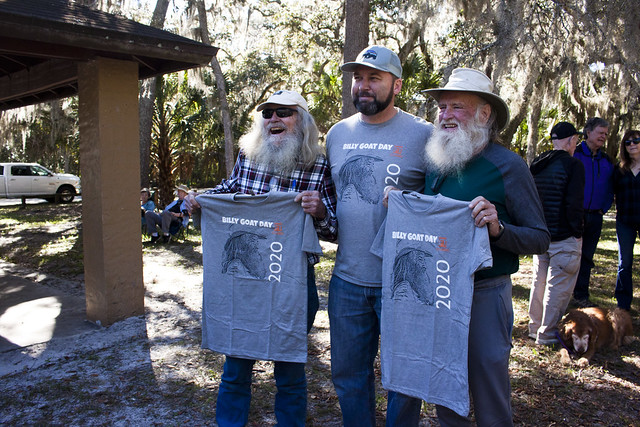 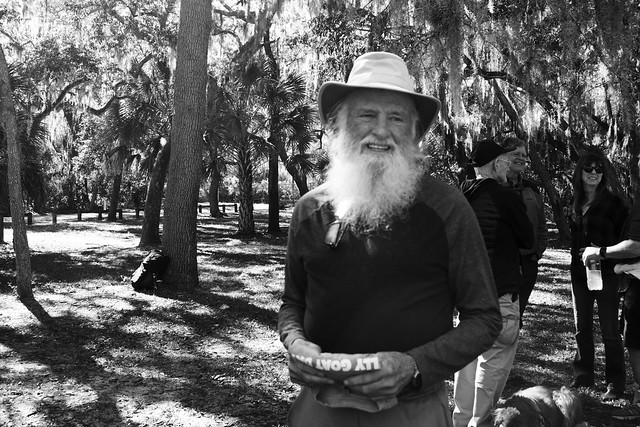 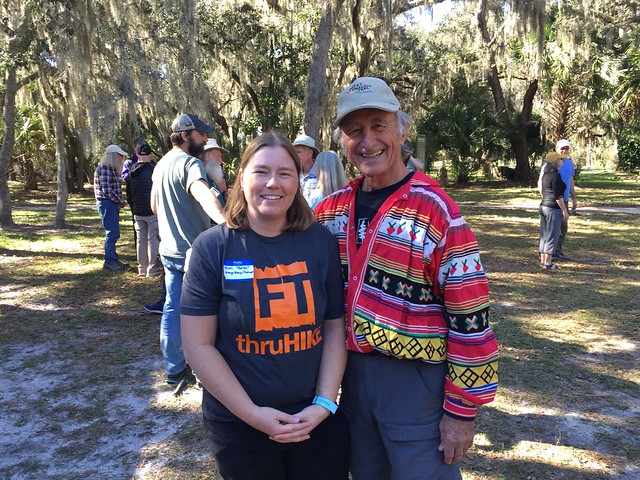 Me with Jim Kern! 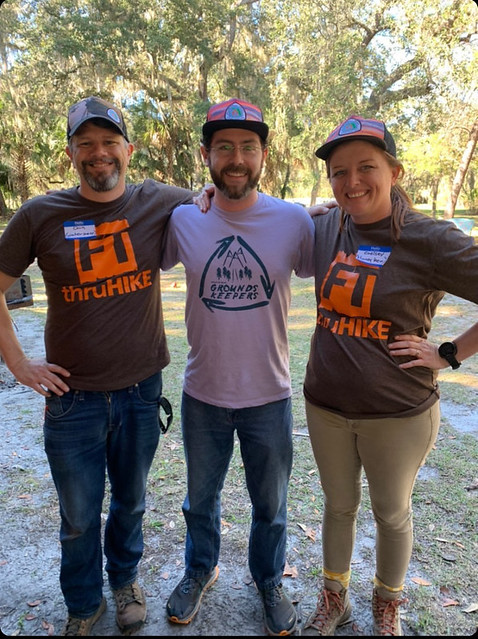 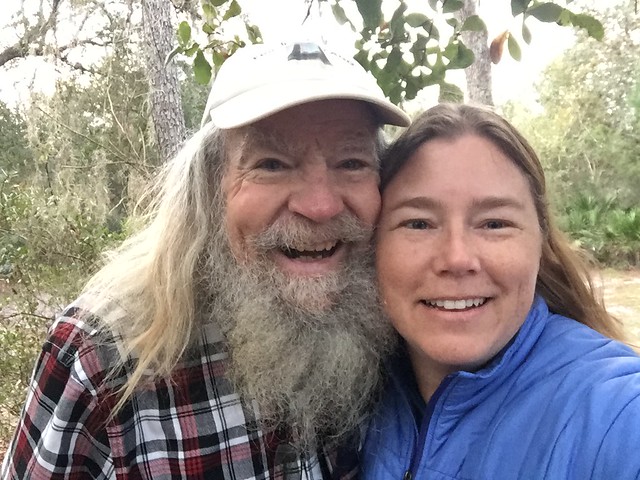 And a selfie with Nimblewill Nomad—which might be my most favorite memento from this entire trip!

Eventually I’ll get a podcast episode up of my viewpoint from the weekend as well as other audio I recorded. Overall it was an exhausting and whirlwind event and I was extremely tired when I arrived back in Houston late Sunday evening but I was so glad to have made the trek out there!