Thinking:
Basically my thoughts run from COVID-19 to regular life in almost the same thought. “OMG, we’re all going to die!”…half a second later, “Mmm, looks nice outside, I think we’ll do pool in the afternoon and I’ll crochet while Forest plays!”

As someone who has been in exactly two buildings since mid-March, my own house and my work office, I have definitely felt a little bit disoriented at times. I haven’t even been to my work office in at least three weeks, maybe four. I have to run up there tomorrow to get a GPS ready for someone but otherwise I’ve been at home. Chris has been going up there some because no one else has been in his building or if the one other person who is there is actually there, he’s in a completely opposite end of the building. I’ve had him water my orchids for me but I’m finding myself missing them so I’ll be happy to see how they are doing when I go in tomorrow.

There is a noticeable increase in vehicle activity in the neighborhood compared to even just two weeks ago. Also, the amount of people out walking or riding bikes is slowly decreasing as is the various people who have golf carts driving around. We drove an hour or so east to Trinity River National Wildlife Refuge to go hiking this weekend and it was my first time seeing in ‘town’ since all of this happened. Yes, we’ve been to Sam Houston NF to the north twice but that goes into a more rural area and through a small town so I haven’t gotten to grasp how busy (or not) things were. As we came back from hiking yesterday we drove through the north part of Houston via Beltway 8, so plenty of city to see. It wasn’t as busy as a normal Saturday afternoon but it was far busier than I expected. It would have likely been different a few weeks ago but with the soft reopening starting this weekend restaurants had lines through drive-thrus and plenty of businesses were insanely busy (Hi, Home Depot!). We also saw plenty of non-social distancing happening and lots of non-mask wearing, including the odd dichotomy of two Chick-fil-A workers who were handing people their food in the drive thru-line…one had a mask and the other didn’t. Kinda one reason we haven’t tried eating out yet.

The saddest thing to see are the playgrounds and having to tell Forest he can’t play on them. One of the trailheads to the TRNWR was at the back of a city park in Liberty, Texas and the playgrounds were roped off. Our own city playground is also roped off, though you can visit the pond and grass area around it. I really do miss having Forest being able to play on the playgrounds and one of our favorite weekend activities was going to the library and then hitting the playground after. I have seen other libraries doing curbside pickup but so far our county has not instituted that and is still closed.

We have also not eaten out anywhere despite the increasing desire to get Tex-Mex. That desire was seriously amplified yesterday after our first hike but we ate our own food and stayed away from people and just did our hikes. We did look longingly at the snowcone place in Liberty with the line of 10 cars…

For now we’re going to see what happens in the next couple of weeks. But I suspect we’ll still be eating at home and grocery shopping every three weeks throughout summer. And any trips to the beach will have to be turned into trips to the backyard blowup pool this year. I am lamenting that we won’t have what was becoming a yearly Memorial Day weekend get together with my parents and brother’s family down here at the house.

Gardening:
The tomatoes are finally growing strong! We sowed cowpeas, beans, cucumbers, and some squash and pumpkins about two weeks ago. Many of those are finally starting to take off. With some rain showers we had over the last couple of weeks growth has been good.

I need to get on top of weeding again as I had pulled back on the gardening a bit lately. Summer heat and late spring rain is going to make the weeds go into hyper growth very soon. 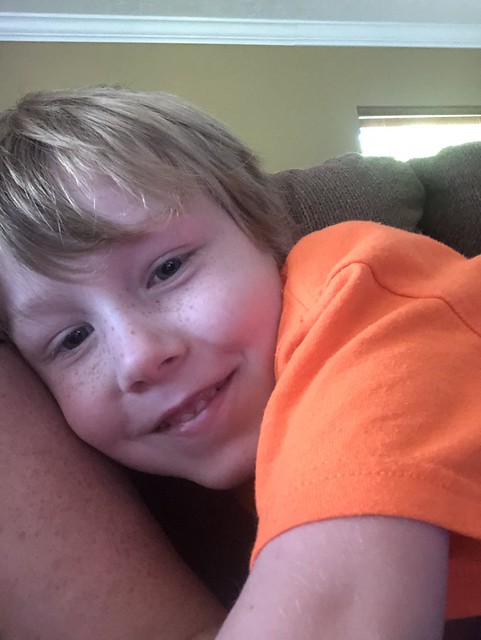 Though, I will be (am) ready when he can play with kids his own age again!

Reading:
Oof, my reading has taken a serious hit. My ability to focus is out the window and with audiobooks being out the window too, I have only completed one book in the last month. That was Life after Life by Kate Atkinson. It was a book I had briefly started back in 2017 but never got into before it returned to the library. I put myself on the digital list again like six months ago and it came in so I forced myself to read it. Forced is a hard word, I enjoyed the book, but because it had a time deadline I had to make myself read more than I would have normally. The book follows Ursula, born in 1910, as she lives her life over and over again through to the 1960s. Most of the book takes place between 1910-1945 with various alterations of her life that stay the same or are replicated in different ways. At times it got confusing but after I got used to the way the book was written I really enjoyed it. I’m currently reading the sequel, A God in Ruins which follows her brother Teddy as well as some insight into other timelines of her family. So far it isn’t written in the same way and is easier to read but I need to buckle down and read it before it returns.

Making:
I started making a crochet top two weekends ago but it has been nothing but a pain since I started. The directions were confusing and finally after many unravels and starting over I’m getting it to where I like it. That means heavy alterations in one aspect, changing up the main portion of the body. I’m finally to the point where I can see it through so we’ll see what it looks like in the end.

I have been spending lots of time in the studio recently and finished two paintings this month: 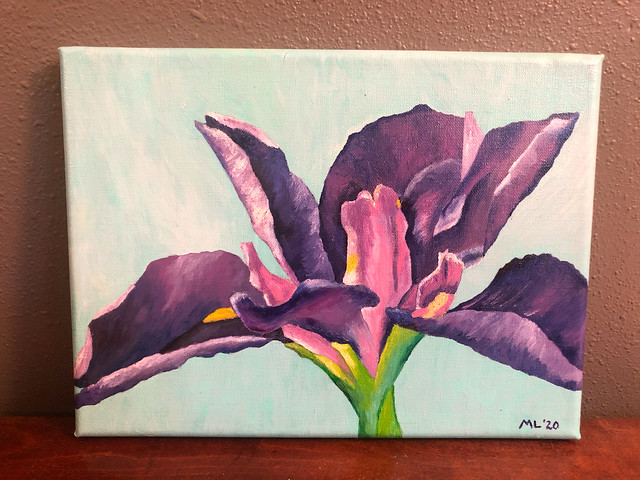 I completed this iris and hung it up last week. 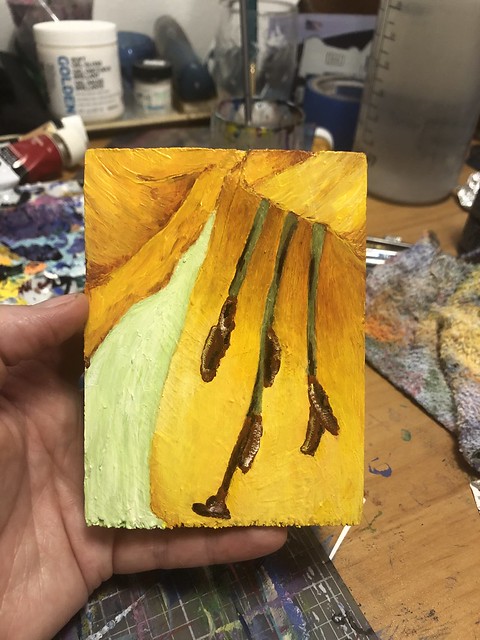 And this macro of a daylily.

I have a few other things I’m working on now, too.

Watching & Listening:
My tv watching is slowly decreasing as shows end their seasons or series. Grey’s Anatomy and This is Us ended earlier in April for the season. Homeland finished its series up last weekend and left a mostly satisfying ending. I started watching that show while on maternity leave by catching up on seasons 1 and 2 and season 3 launched sometime later that autumn. I was hooked after that!

Outlander is back on but only a few episodes are left for the season. Better Call Saul just finished its season and boy, I love that show so much. There is something about the way it is shot but also just the time period it is in, the early to middle 2000s. I believe next season is the final season and I feel like there is so much left to get to before the start of Breaking Bad time period.

Good Girls is also back on and may only have a few episodes left as well. And lastly, Call the Midwife. All of these shows had been stacked up on Sunday or Monday evenings so my tv watching was crammed into earlier in the week which has been good for my free time (see: studio time!) later in the week. As these all wrap up I won’t have much to watch. Netflix and Amazon have been meh lately. I did break out my Anne of Green Gables VHS tapes and was sadly dismayed to find that the second tape to the first series is missing!!! I watched the first tape and then had to move on to Anne of Avonlea, which I finished last night. Ah, it was great to revisit that again and I’ll have to break my books out again soon. I will be digging around to see if I can find that tape or I might be tracking down a DVD of it soon.

Listening—honestly, not much. I might listen to 2-3 hours of podcasts a week at this point in time. Incredibly hard to listen while working at home but I’m trying to get back into them a bit.

Looking Forward:
Not sure. Kinda hard to look forward to things when you don’t know when you will be able to do anything again. I do look forward to planning local hikes. I wouldn’t mind sneaking in a backpacking trip locally sometime soon. A night in a tent would be nice.