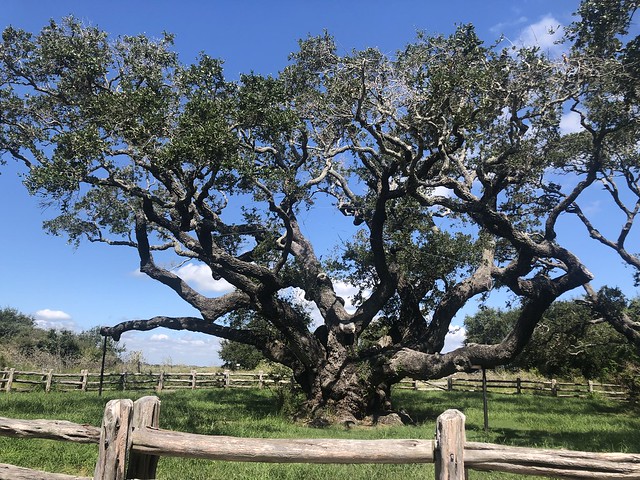 Our trip to Goose Island State Park in early October was lovely, though the mosquitoes and the heat were still ramped up onto “high”. But we made do and enjoyed what we could. The Goose Island Oak still stands tall, though quite weathered and who knows how many more decades (or centuries) it still has left in it. 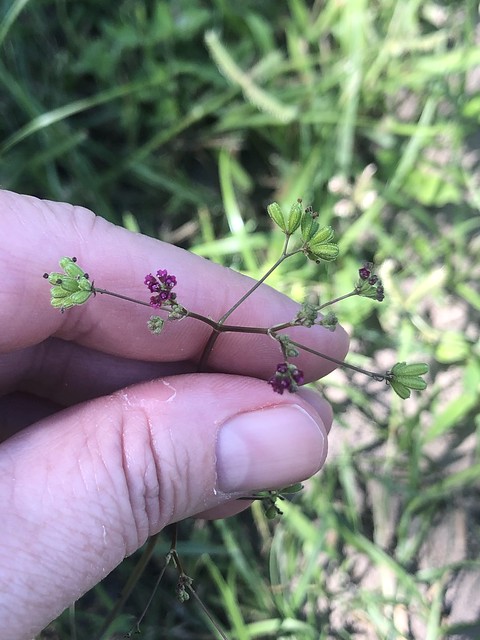 As is my usual these days, I am always on the prowl for plants and interesting fauna to add to my iNaturalist sightings. This interesting little plant I only took a few quick pictures of because I thought it was nothing of particular interest but if it is what I think it is, it is quite rare and uncommon in Texas. It’s typical range is mostly Florida and a few areas in Alabama and Georgia. There’s a sister plant that is fairly common here in Texas, scarlet spiderling, B. coccinea but this particular plant was not trailing like it does and it did not have the inflorescence that plant does. If I had known I should have looked more carefully, I would have taken better photos. 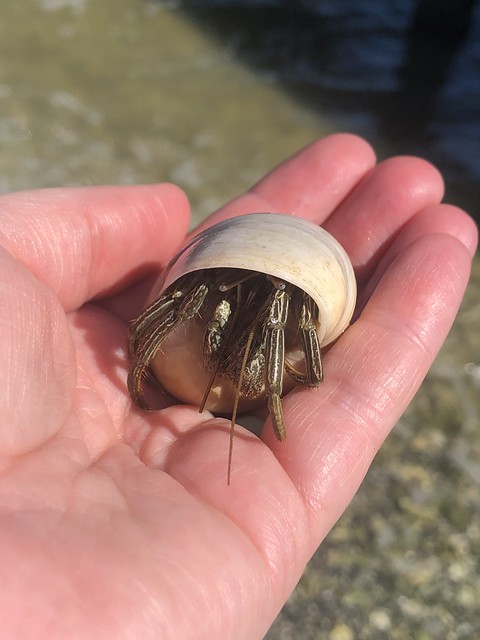 Every time I see a hermit crab I think back to when we would buy hermit crabs from the gifts shops in Port Aransas and bring them home to live in their little plastic cages for a few months. There’s a hermit crab graveyard on the side of my parents house. I know my mom would find their shells every now and then when she would go to put in plants! 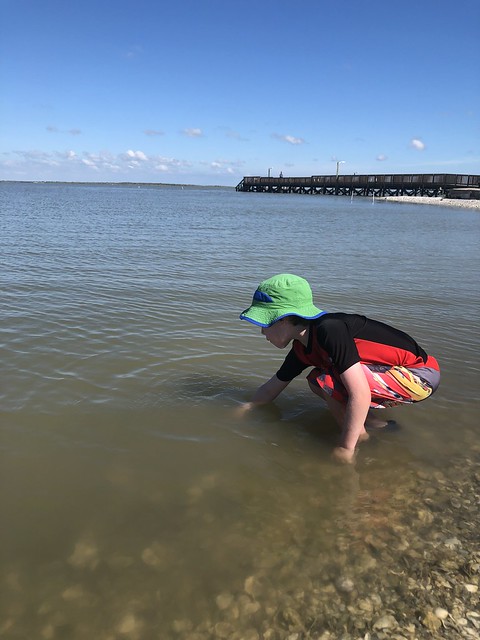 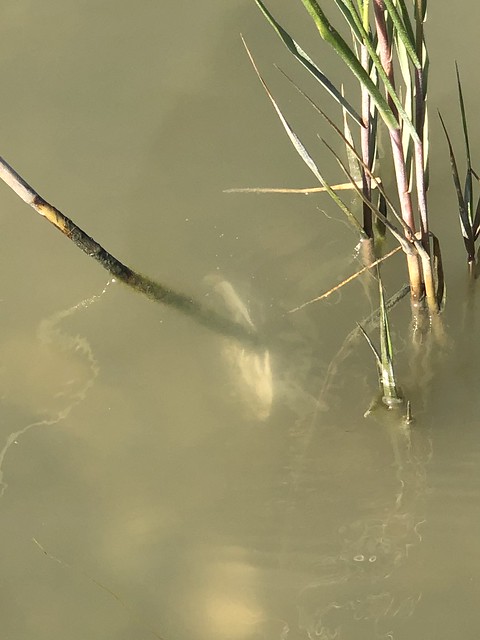 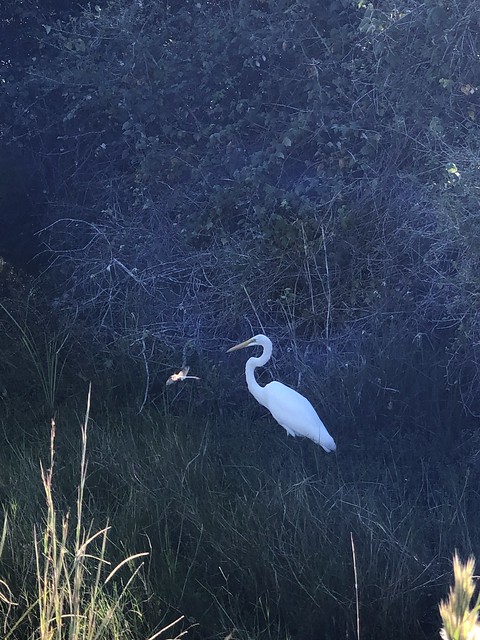 I wish I had snapped this with my camera because I might have been able to get the dragonfly a bit better but I do love the light here, which is why I had stopped to watch the egret to begin with. I did not stop long—mosquitoes! 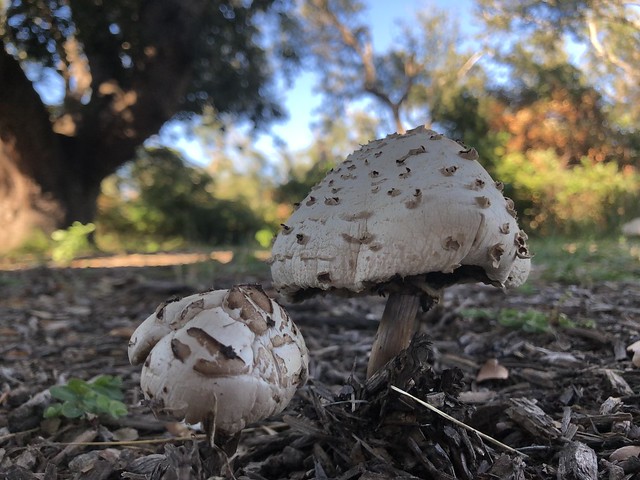 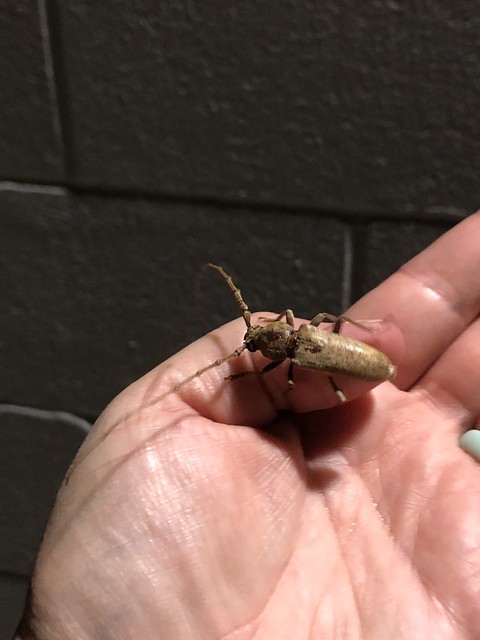 The best place to find interesting insects is along the bathrooms in the campground at night. The lights attract the insects and this longhorn beetle was unfortunately trying to cross the high-trafficked concrete. I picked it up and moved it over to an oak tree, though it took some coaxing because it was not particularly interested in leaving my hand! 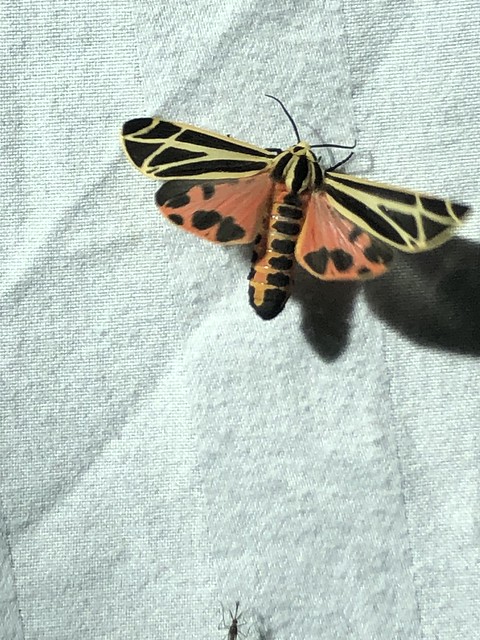 Chris set up the mothing equipment for this trip which turned out to be a good endeavor, though again, mosquitoes. I’ve always loved these tiger moths but had never seen on in person! A very lucky find! 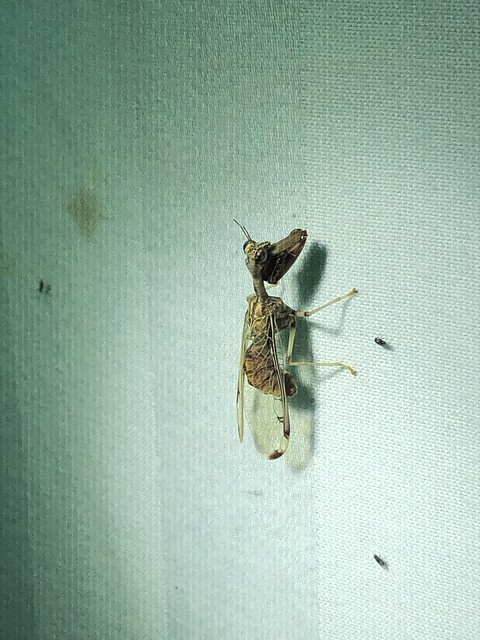 Now, this was a very interesting insect to see and one neither Chris or I had encountered before, though this particular species is pretty common in Texas and somewhat widespread throughout the eastern/southern half of the US. While they look like mantids they are actually more closely related to lacewings and owlflies! 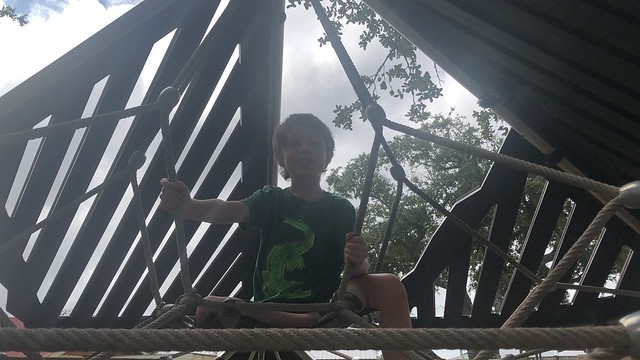 We had a stop over in Rockport for lunch and a playground for Forest. Usually there’s a playground at state parks but Goose Island didn’t have one and he really wanted to play so we got to see some parts of Rockport we don’t typically see. 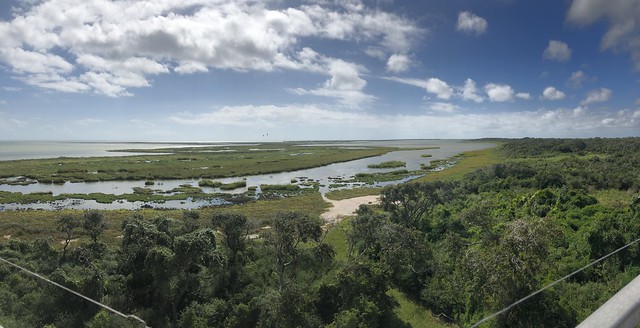 Aransas NWR was quiet this time around, compared to our New Years Day visit earlier this year. 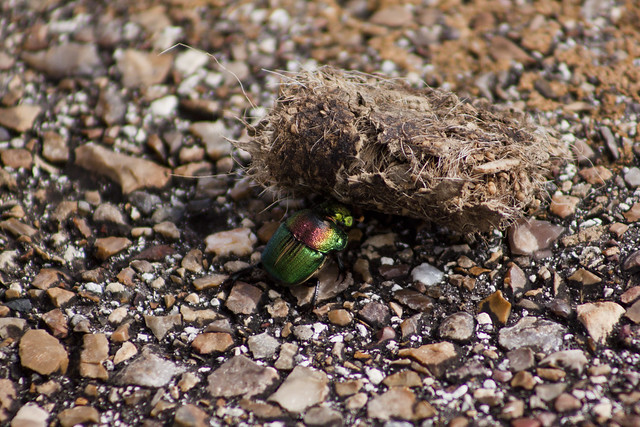 This was a little bit of a delight along the scenic drive there. I’d hopped out to take photos of some water lilies and as I was walking over I thought I saw something blowing down the road. After taking my photo I looked closer at what was blowing and found a dung beetle pushing its treasure off the road. There was a second beetle pushing another piece of dung too! Beautiful beetles! 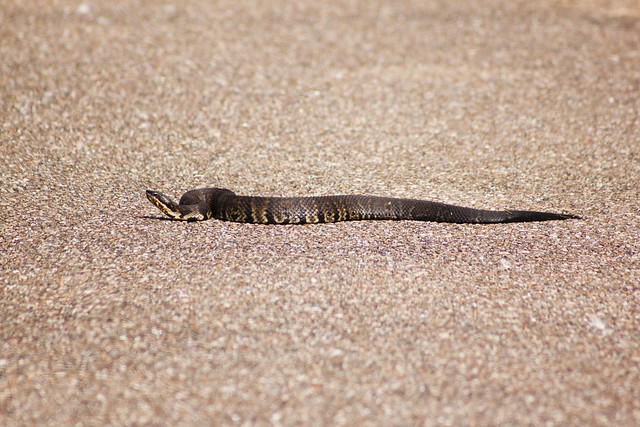 And not much further away we found this chonk of a cottonmouth sunning on the road. 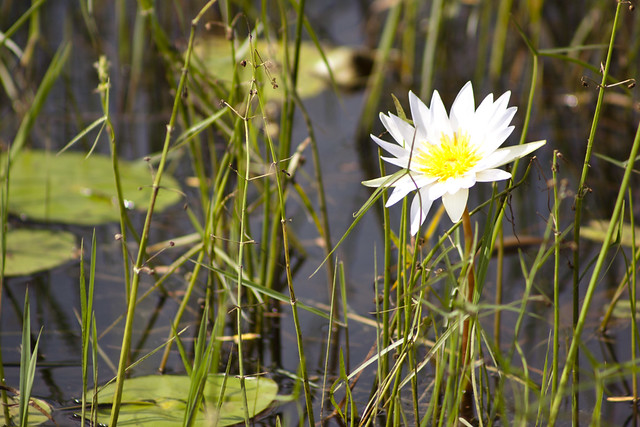 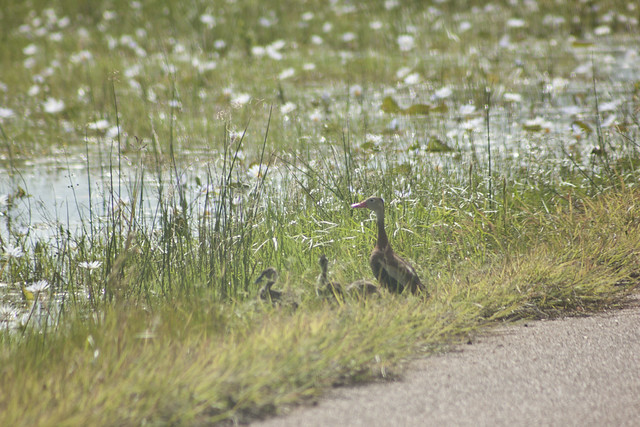 A whistling duck with her ducklings, surveying where to go into the pond. 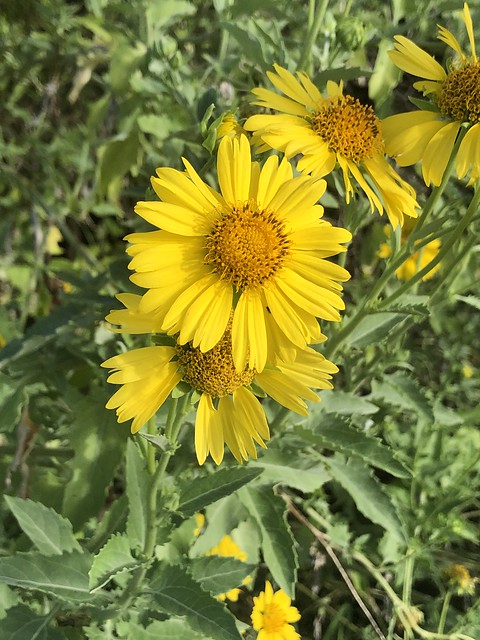 This verbesina isn’t nearly as common in our part of Texas so I’m not as familiar with it as I am its cousin frostweed, but cowpen daisy is a significant nectar plant for the monarchs along their I-35 flyway back towards Mexico. Lovely, cheerful things! 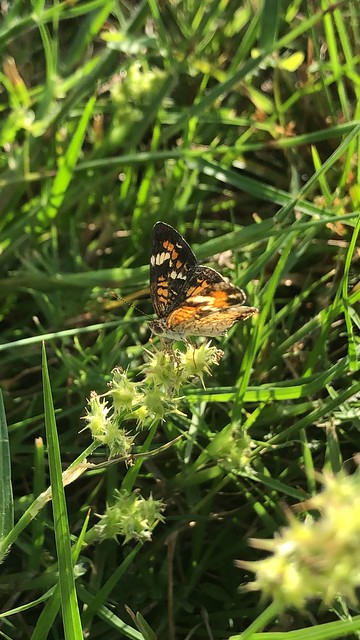 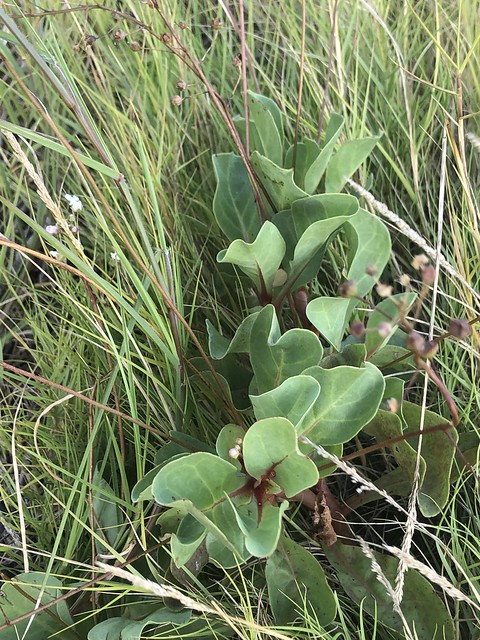 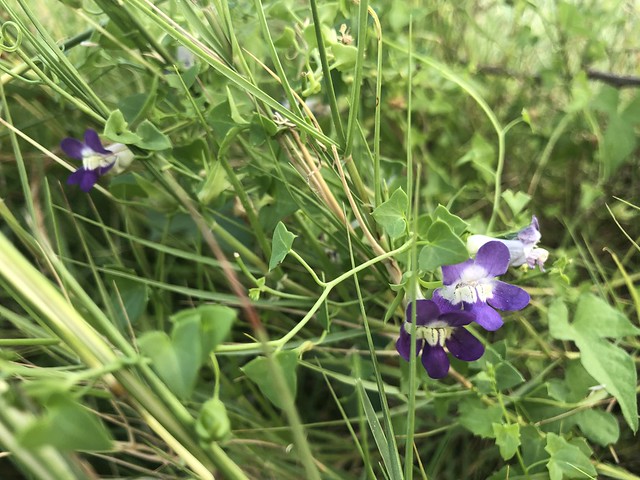 I wasn’t expecting to see this as I usually see in the Hill Country but it was vining itself on some bushes at the far end of the bayside camping area near the bird overlook. 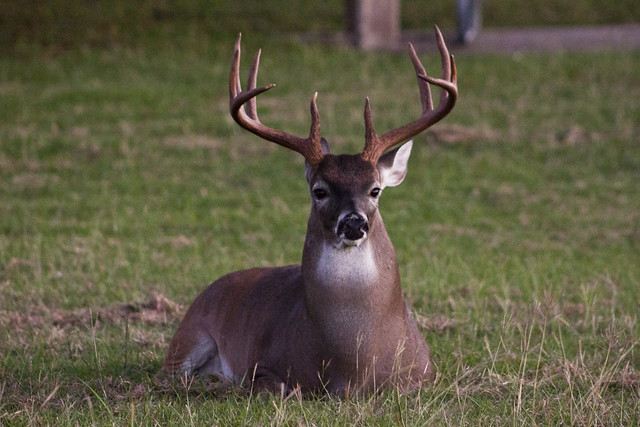 This handsome fella took a rest while his family members meandered around the picnic area. We were in the truck and he wasn’t intent on moving so I was able to get several decent photos with my camera. Very handsome—hope he doesn’t stray outside the park and get shot! 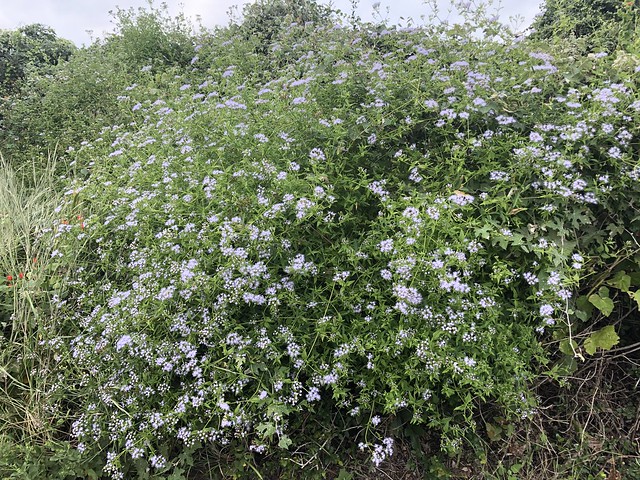 I love coastal visits and I will be thrilled one day when Galveston Island State Park opens its beachside camping once again—I think it’s been closed for almost four years now—but the mosquitoes are a force to be reckoned with. A lot is packed into Goose Island State Park—I only wish they’d protected more of the peninsula before it was built with homes and condos.