With spring weather appearing Chris and I have been outside in the yard working furiously on various projects. Our current project is what will hopefully be a quick perimeter flower bed around the man-cave. This area had previously been landscaped as per evidence we’ve found in the bed: soaker hoses, old stumps, telephone poles acting as a border, pieces of green plant tape, and other miscellaneous items garden related. 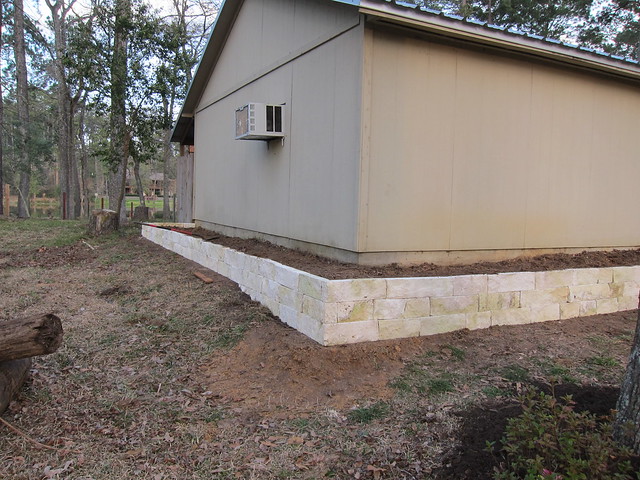 We still had plenty of stone left from the other flower gardens that needed to be put to use and they have worked out perfectly for this section. Standing back further in the driveway, the new bed really does tie together the man-cave into the rest of the house and garden. We’re thinking of putting in rosemary and maybe Texas sage on the front. As for the side where the air conditioner is, that area is more shady so we will lean on more shade tolerant plants such as ferns and perhaps azaleas. Not quite sure, yet!

The next garden project will be digging a line to the vegetable garden to install a watering system out there and then to put in the perimeter herb beds. That’ll be a later in March project!

Come drop by Sprout Dispatch and see what’s going on all of our gardens there.