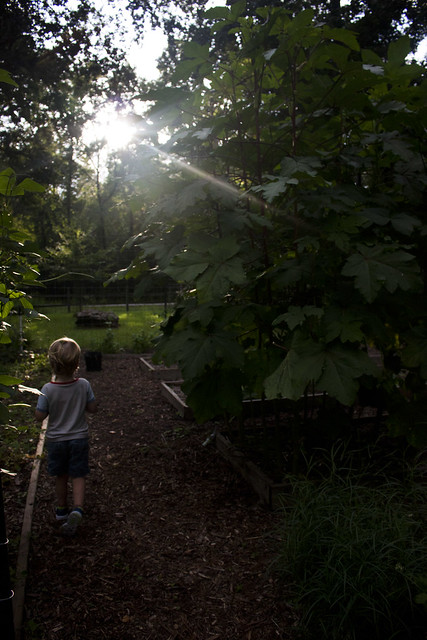 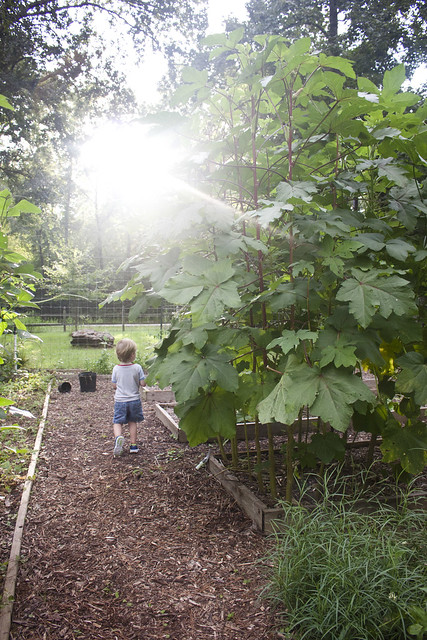 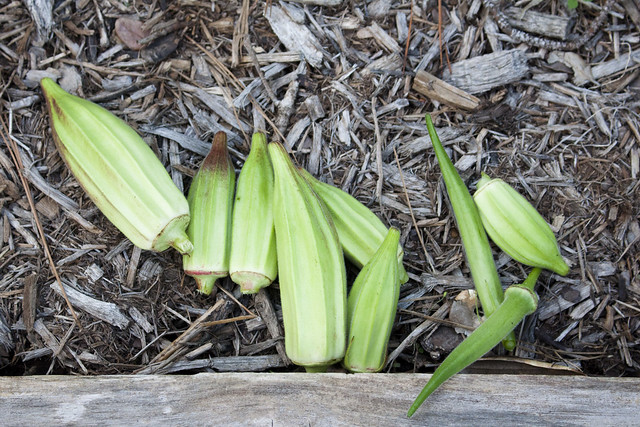 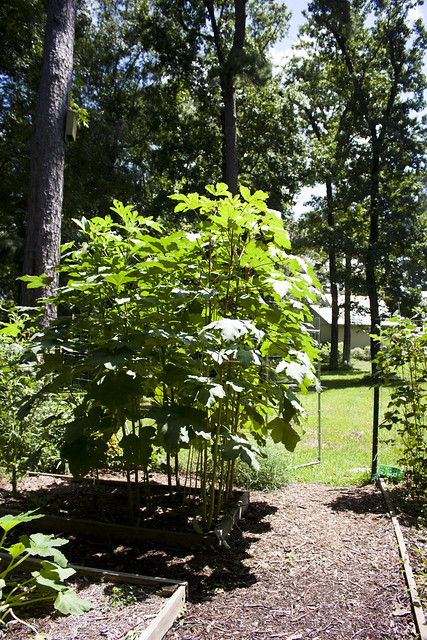 This has been the Summer Of Okra for me. I put it in the place that okra loves—full sun—and let it go to town. Being as I’m the only person in the house who enjoys okra, I planted three short rows from seed we had from several years ago. We’ve only ever grown three types: Eagle Pass, Hill Country Red, and Stewart’s Zeebest, so it is pretty easy to figure out which is which once they come up and fruit. Yes, the seed was from unlabeled bags in our seed catalog! This year it was Stewart’s Zeebest and Eagle Pass. I would like to try a new variety next year so I may look into some other heirloom types when it comes to ordering next spring.

I ate plenty of okra raw, grilled some, buffalo okra fries, made okra gumbo, and I think this last bunch might get frozen. I’m picking every few days and have to get our largest step ladder to reach the tallest plants which are now at least 9′ tall. Even utilizing the tall step ladder still requires me to bend the very tallest plants down so I can trim off the okra! 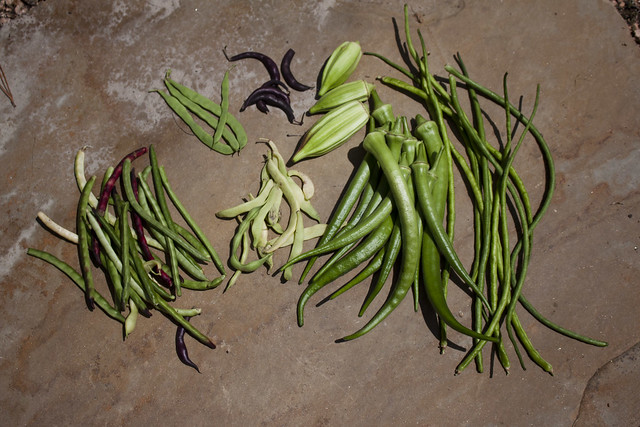 Other plants I’ve been harvesting regularly have been cowpeas and various beans. I’ve been blanching and freezing the cowpeas so we can cook them up at a later date. This year I grew pinkeye purple hull and they produced perfectly. Next year I’m planning on an entire bed of them since they did so well. I only planted three ‘cages’ worth—using the tall trellis cages that Chris built for the snap peas. 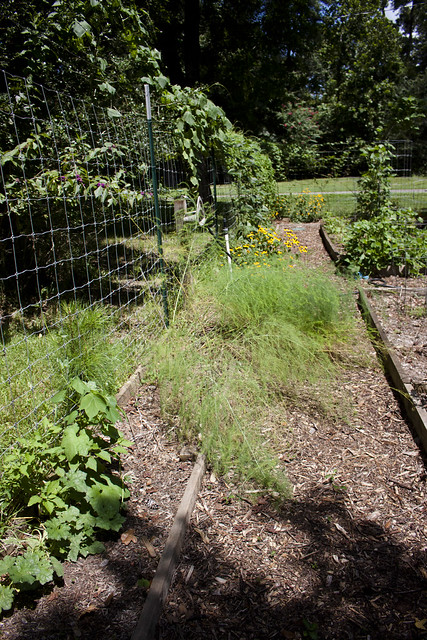 The asparagus really need a fence or something to hold it up. It’s beyond time to get something done about that. 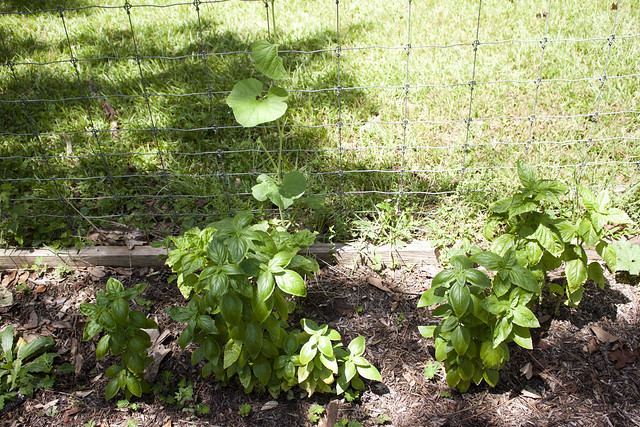 This year I got basil started in late May before we left for Florida. Next year I need to get it started in late April instead. So far I’ve dried a few of the cuttings I’ve taken but otherwise we haven’t been very good about using it. 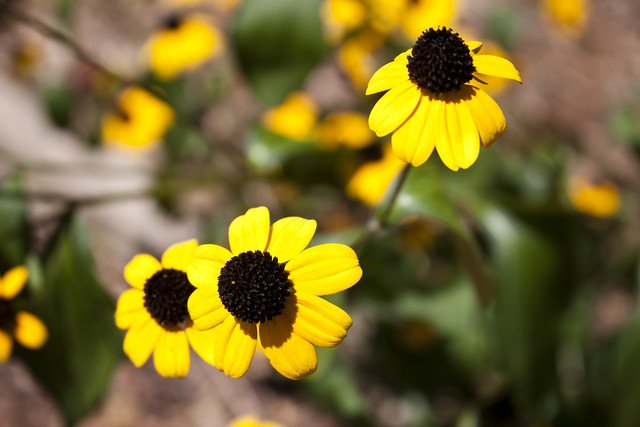 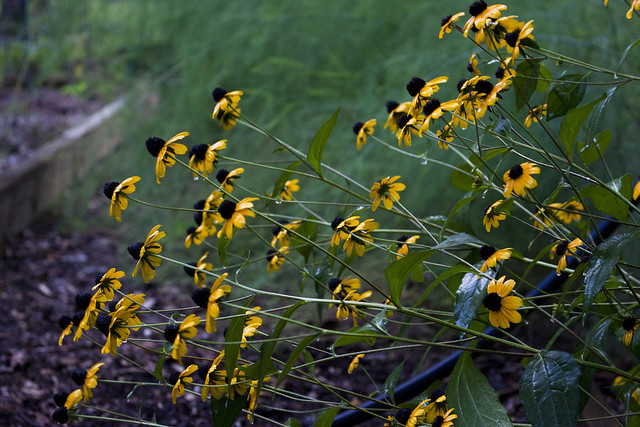 Letting the rudbeckia bloom after they self sowed out here has been a good idea. There several clumps we have spread around the garden have really brightened the garden up and lured in the pollinators. We had a rainstorm sometime mid-summer that caused the blooms to flop over a bit, though they have continued to bloom despite that challenge. 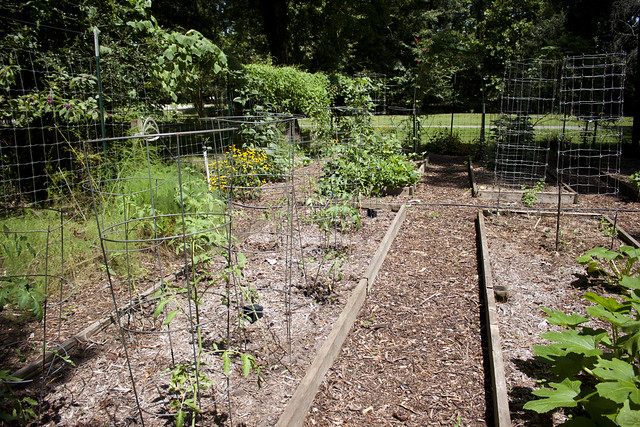 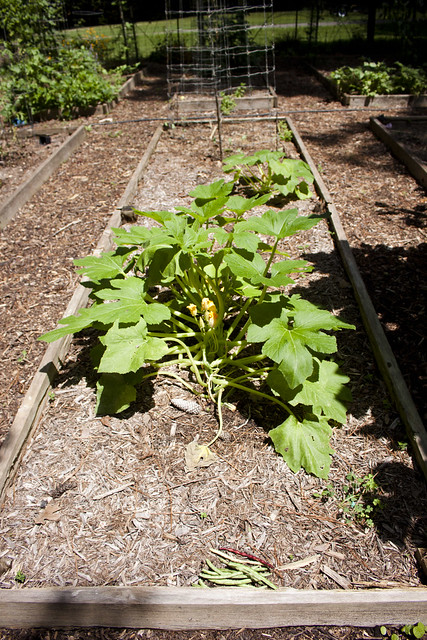 Behold! My beautiful zucchini! Yeah, too bad it is now dead! Thanks squash vine borers! I was trying to trick you by planting a bit later but it seems you’ve almost had the last laugh! I still have a couple of plants out there but the biggest and strongest couldn’t put up a fight. It looks like this week is the last week to get another crop sown so I may try it once more, hoping those little buggers are done for the year. 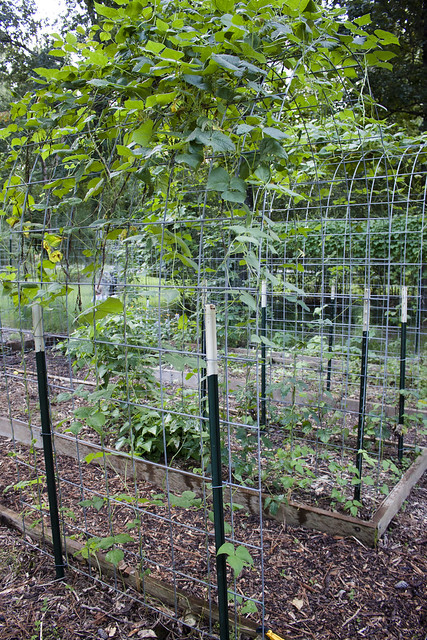 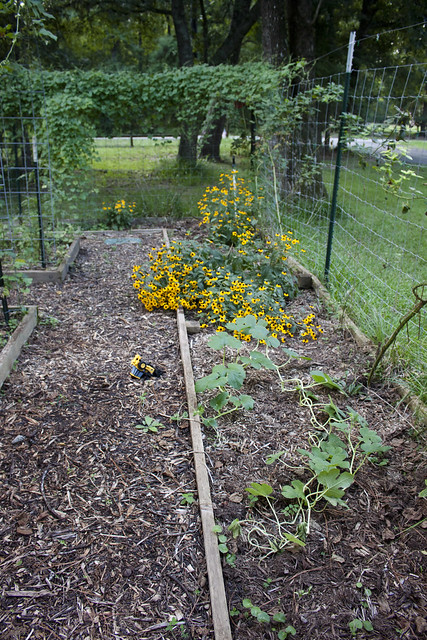 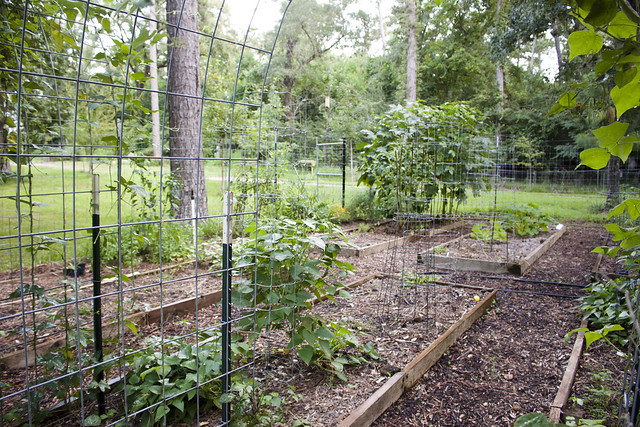 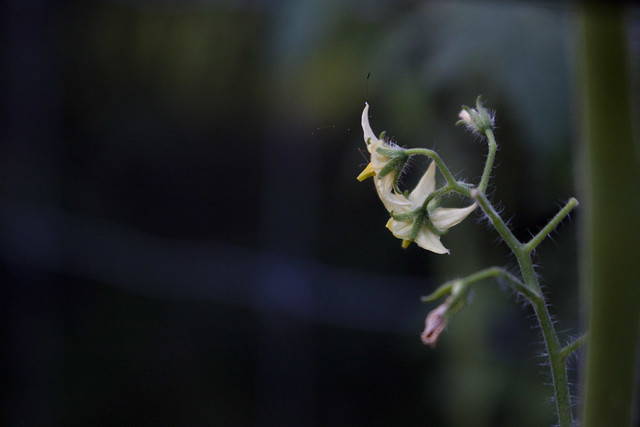 The Red Siberian tomatoes I sowed and planted back in June are doing well but I’m still unsure how they are going to go. They could probably use another round of fish emulsion. They have tried to flower a couple of times but it has still been too hot to set fruit. Now, two self-sown tomato plants (probably Matt’s Wild Cherry) came up in another location and are starting to produce tiny fruits—that’s what this flower is from. 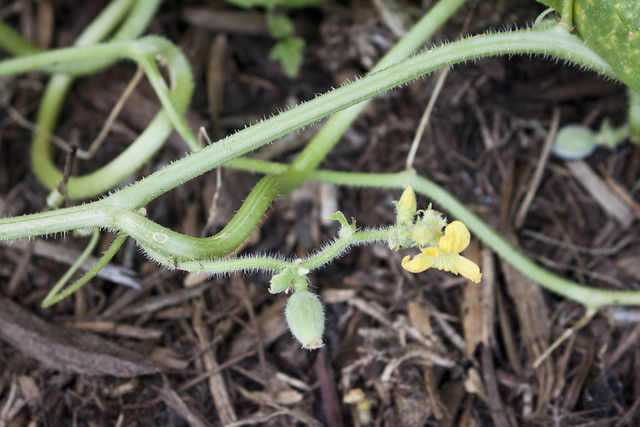 I am excited about this one! I have a couple of ripening fruit photos on my phone and will have to share those at a later date, but this is ‘Rich Sweetness’, a palm-sized melon that turns orange when ripe. I have one nearly ripe now, though it started to split a few days ago. I can’t decide if I should harvest or see if will finish ripening. And I found a second one growing so maybe there’s some promise in a few more fruit before the season is over. 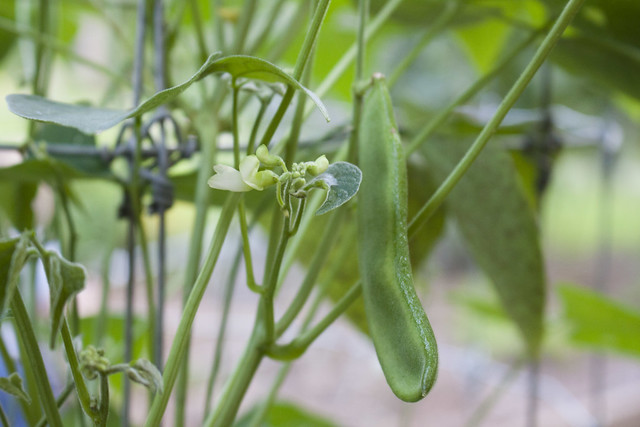 Another new plant I’m growing this summer are lima beans! I bought them at the grocery store back in May and thought I’d give them a whirl. They grew and bloomed for a lot of the summer but really didn’t start producing fruit until August. I’ve harvested a few pods but it hasn’t been anything significant to eat in bulk yet. I’m still debating whether they will be worth it in the future or if I should try a different variety. 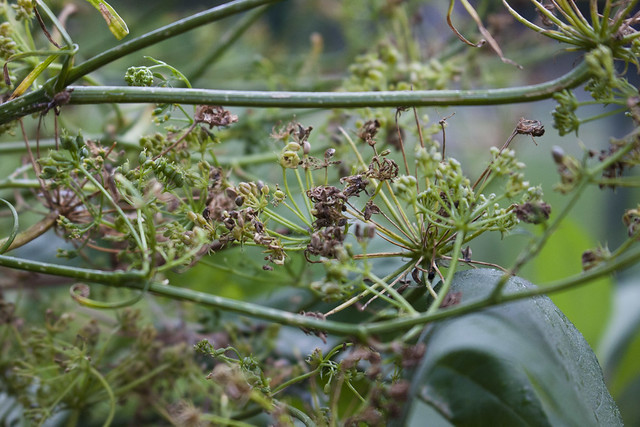 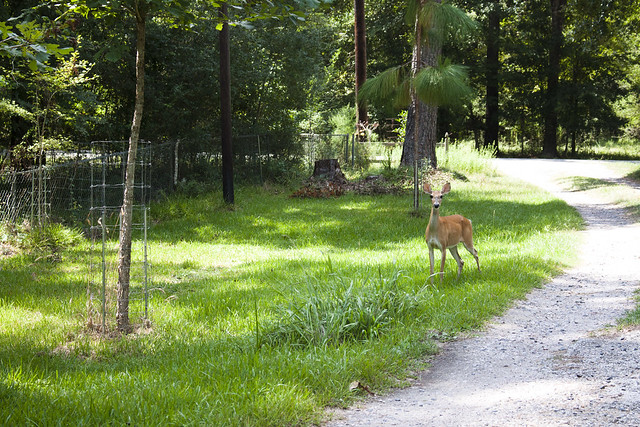 Overall it was a decent season in the edible garden, though it could have been more productive. I feel like I’ve got a good idea on a few things to change for next year—more beds of beans and cowpeas—and maybe the Seminole pumpkins will germinate next season. That’s one change from last year I am bummed about, that they never germinated. Rather, one germinated but it did poorly rather quickly. It was a little harder this summer because we were gone for 11 days in June for peak blackberry and tomato season and then I spent several weeks getting back on top of weeds after that and re-mulching the paths. So, the balance got off-kilter there.